"Dirty gem"
We all like some good ol' naked drama, but this Belgian feature set in a naturist camp takes it one step further - available on VoD on Friday, November 20th

Patrick, left to tend to the running of a nudist camp in his father’s absence, is sad. The campers think it’s the job; his lover thinks it’s the stress; his mother points to the true nature of her late husband’s sexuality as the cause of his duress. And then there’s Patrick, convinced that the sadness he feels is related to the disappearance of his favourite hammer. Hammers, he’s told, don’t disappear: they’re stolen. So begins his journey to find his hammer amidst the naturists, nudists and philanderers who share this camp with him.

And that, as far as plot goes, is it. Except of course it isn’t , because Patrick emerges during the film’s 106-minute runtime every bit the tragic character his campers consider him to be. He seesaws between apathetic and indecisive, enduring pitying looks from the naked personages who greet him from their neighbouring seaside. Such is his supposed incompetency, one camper offers to buy the property from his hands, feeling the integrity of the site would be better served by someone who isn’t forty, flabby and facile. But Patrick is none of those things-or so he says- because he’s a 38-year-old artist aching to find the hammer that channels his most creative of muses. 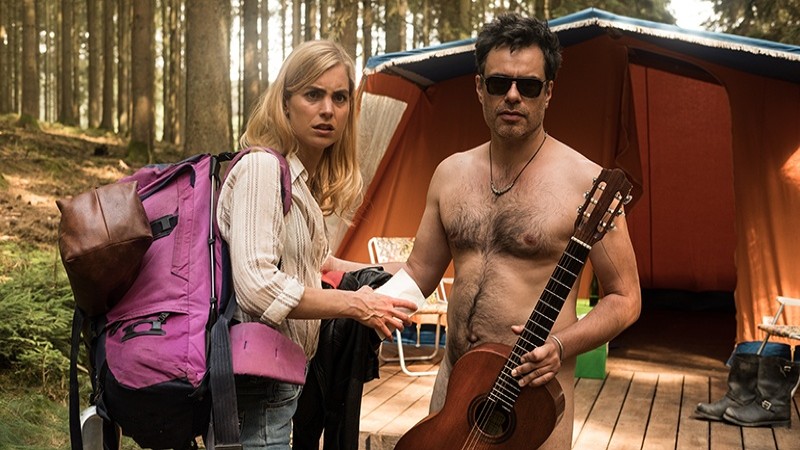 Behind the willies that point to the camera, comes a lead performance even more naked in tone than the bodies exhibited on the screen. This is quite an achievement given how little dialogue he has, but Kevin Jannsens finds tremendous honesty in a character who lives in a world even more fantastical than the pen he lives in. It’s a soulful, searching performance, and one that keeps the viewer’s eye engaged during the film’s ponderous, unhurried pace. He tends to the outages, outcries and offerings (many of them sexual) that occur all over the commune. Little by little, he grows more reticent, only raising a hand to punch the face of the man whose wife Patrick currently fellates.

Patrick has no need for trivial actions. His mind races to the beat of its own drum, and not even the rowdiest of tenants can disturb that. Like the blocks he builds, Patrick grows stronger with every chop levelled at him. It’s a unique performance. Jannsens builds on the blocks that transport him from childhood to adulthood. And much like the hammer that disappears from him, Patrick can take a few knocks before he’s finally put to pasture.

Patrick is out on VoD on Friday, November, 20th. You can also choose to support one of a number of indie cinemas by streaming on Vimeo.