"Greasy movie"
Psychological-drama sees a teen and her mother stranded on the outskirts of a remote village in Northern England, in a meticulous and thoughtful representation of trauma – out now on VoD.

Emma’s (Emilia Jones) older brother (Oliver Coopersmith) left their mother (Sienna Guillory) for dead in a violent assault, forcing mother and daughter to flee. Crashing their car in a freak accident, they find shelter by breaking and entering into an isolated house on the outskirts of the village.

Out one day for a swim, Emma meets a mysterious boy (George MacKay), who’s fascinated with the defunct nuclear power plant that poisons the lake water. Listening to stories of his adventures, she inquisitively asks questions, which amuses him. But she can’t run from her traumatic past forever, and when it catches up with her, she must face it if she is to move on.

Nuclear opens with a poetry of words and imagery. The mysterious female figure (Noriko Sakura) who first appears in the film’s opening scene, offering a poetic contemplation on death, echoes the Lynchian surreal. The cinematography and the editing rhythm, staring up and across through the crowded woodland of trees, evokes the aesthetic poetry of cinema. The opening has a feeling of waking, and as our eyes open we see before us the first glimpses of the birth of Nuclear’s world.

The intense and unnerving opening, as we hear the cries of pain from the mother, the aggressive grunts of violent exertion from the son/brother, is disturbing. It’s not gratuitously violent, but Linstrum and her cinematographer Crystel Fournier do not pull their punches. We feel uncomfortable and we want to pull our gaze away from the screen. In this moment a bond is forged between the audience and the two women.

What quickly defines this as accomplished and mature storytelling is how we should feel about the characters is not as black and white as the opening scene suggests. Revealing familial tensions complicate our feelings towards the young man. Yes, his violence is full of hate, anger and frustration, but it’s an anxiety whose roots lie in the imperfections of people and relationships. Linstum and her co-writer David-John Newman, take the neat juxtaposition of the terms like and dislike, good and bad, and plunge them into the murky grey. 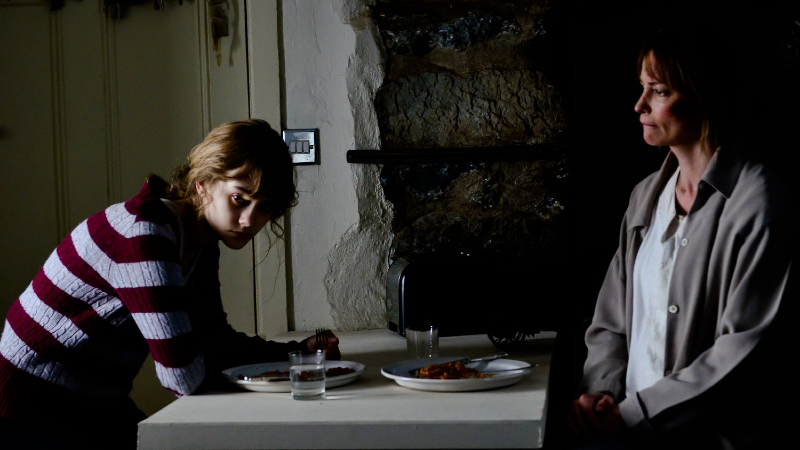 Without entering the world of horror, the director and her co-writer touch upon the idea of the origins of the monstrous. They flirt with horror, but remain interested in the psychological drama. Linstrum utilises horresque cinematography: the female protagonist stalked by the angry male antagonist i used as a complimentary tone. The focus is on the psychological, and a repeat viewing will reveal a nuance to the internal conversation of the mind in response to trauma. Here is a meticulous and thoughtful contribution to cinema’s representation of this mental disorder.

Nuclear subverts our expectations by downplaying the drama of its story. The interest of the filmmakers is that we contribute to its creation, by bringing ourselves to the film and emotionally connecting with Emma. The drama comes out of our own feelings of desperation and urgency, empathy and anxiety that we share with not only the characters, but also the filmmakers, who have crafted the film with a deliberate intent to engage with us through shared thoughts and feelings.

Contributing to this repression of the drama is the limited screen time of the unnamed boy, who traditionally would be subject to a more thorough character development. This choice sustains the feeling of Emma’s isolation, by holding the surrounding world at arm’s length. Even when she enters the village shop, any interaction is unseen – we only see her enter, cutting to her back at the house. What is so striking is this artificial feel, life neatly blocked out and streamlined with a minimalism, that contrasts to the rigorous portrayal of the psychology of trauma.

Nuclear is an unassuming film, that subverts the expectations of the mainstream commercial, and refrains from committing fully to the non-commercial aesthetic. There are glimpses of abstract visual metaphors for example, with a potential for an ambiguous reflection on character, themes and ideas.

Linstrum conveys that experience of crossing paths with a stranger, and while the encounter touches us, an aura of mystery remains – what do we really know about Emma, her family or the unnamed boy? This allows for a subtle emotional seduction that sparks our intrigue, and in a film vulnerable to spoilers, it leaves us with the impression that there’s much going on beneath its simple form. And like parables, Nuclear is about us seeing the ideas and reflections of thought that can either offer us a message, or be a spark for our own deeper contemplation.

Nuclear is out now on VOD