"Greasy movie"
The life of Rainer Werner Fassbinder is given the Brechtian treatment in this Cannes-selected film - on BFI Player on Friday, April 2nd

Before his death at the age of 37, Fassbinder directed more than 40 films, as well as producing several plays and TV shows. His cocaine and sex-fuelled career made him the true provocateur of German Cinema, helping to give birth to a New Wave of cinema while challenging cinematic conventions and German’s collective national shame. But you don’t get to make that many films in such a short space of time without being a unique type of character: Fassbinder worked because he couldn’t think of doing anything else, making his entire life a type of film.

Director Oskar Roehler shoots his biopic Enfant Terrible in a Brechtian style, with deliberately artificial lighting, mannered acting and painted-on props and sets. This is a particularly clever method for a biopic of a filmmaker, as it shows little difference between the world around Fassbinder and the films he is trying to shoot, giving a great demonstration of how life and art can so easily blend into one another.

Oliver Masucci plays the late German director. The actor is 51 years old, three decades older than the German filmmaker in the 1960s. There is no de-aging in sight. Masucci embodies the director’s intense physicality, strength and outspoken nature. In an early scene in Enfant Terrible, he sprays the audience with a hose, claiming that it’s the only way to make them experience the real world. Almost immediately he lights up the Munich theatre scene, bringing in an entourage who will follow him through initial bemusement at his Berlin Film Festival debut through to his eventual international success with masterpieces such as Ali: Fear Eats the Soul (1974) and The Marriage of Maria Braun (1978). 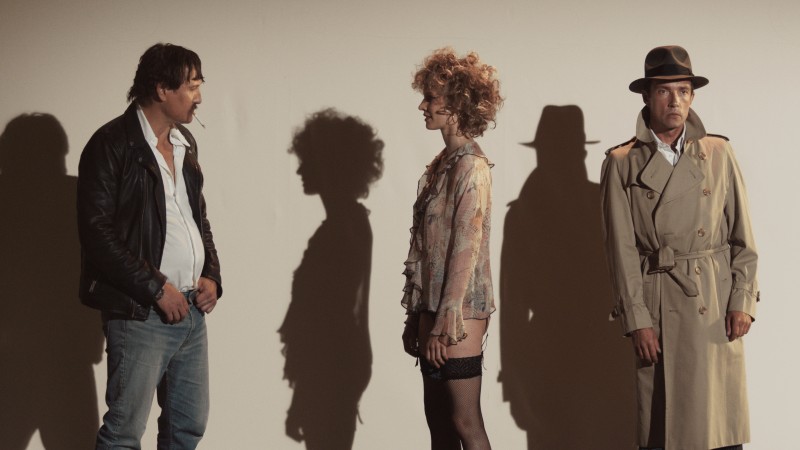 Despite all the stylistic window-dressing, this is a very conventional biopic in terms of narrative, covering Fassbinder’s career from his first film, Love is Colder Than Death in 1969, to his cocaine and barbiturate-filled death in 1982. This is a long and piteous look at his failed relationships, mostly with foreign men, touching on themes of homophobia and racist attitudes, as well his controversial, physically abusive behaviour on set, which would never hold up today. Masucci provides a truly boisterous performance, showing us the complexity of a man who hits people on set but cries after sex, is cruel and dismissive of his lovers one moment, and desperately pleading for them in another.

For those new to Fassbinder’s work and unacquainted with this particularly artificial strain of German theatre-inspired filmmaking, they may find themselves a little lost. But for Fassbinder fans this film is a fascinating look into arguably Germany’s greatest ever director, a wunderkind so inspired he makes Xavier Dolan look like Ron Howard. For the average person, maintaining such a prolific career while rarely sacrificing quality is simply a cinematic miracle that cannot just be chalked down to cocaine use. And while Enfant Terrible can’t quite unravel what made Fassbinder live in such a constant state of inspiration, it serves as a fine portrait of a man who never left the set, even when he stopped filming.

Enfant Terrible opened the Tallinn Black Nights Film Festival in November 2020,when this piece was originally written. It had been originally selected to show at this year’s Festival de Cannes (which was cancelled). It premieres in the UK in March 2021, as part of the virtual edition of BFI Flare. On BFI Player on Friday, April 2nd.

Franz Biberkopf becomes an African refugee struggling to settle into modern-day Germany, in this astounding adaptation of Alfred Döblin's classic - live from the Berlinale [Read More...]

Biopic of Polish born German revolutionary reveals that she wasn't as "radical" as the modern media would like us to think - Margarethe von Trotta's classic is rereleased on Monday, February 4th [Read More...]