Opening on a frenetic car chase, soldier Jung-seok (Gang Dong-won) is forced to abandon a roadside family to the zombie apocalypse that has claimed too many a sorry soul. Boarding for freedom, Jung-seok seeks passage, penance and relief from a plague that soon claims his sister. Thrown into the streets of Hong Kong, Jung-seok craves freedom, before an unlikely mission throws him back to the island he once tried to run from.

Train to Busan 2 renounces any sense of realism for a devilish, kinetic sense of abandonment. Following in the footsteps of an ingrained hollow massacre comes one of the most palpably exciting action films of its outrageous ilk. To suggest that it’s “over the top” is handcuffing the film to limits it simply has no time to indulge. And unlike its more ponderous 2016 predecessor, this sequel revels in a lunacy tailored for popcorn moviegoers.

Much like the decidedly shaggier looking Jung-seok, the film opts to cut loose, let its hair down and be a little reckless. A child soldier uses her toy cars as a beacon to bring the island zombies to their towering knees; a gladiator match differs the men from the zombies; while a war-torn warrior furrowing in the corners of an unmarked kitchen glees with serpentine assuredness at the whiskey bottle that passes his lips. Anchored in subterfuge, sewage and general depravity, the monsters that linger most fervently in the viewer’s eye aren’t the zombies that corner the island, but the survivors (a crew of militant partiers, credited in the subtitles to ‘Unit 631’) that thrive on the sorrow of their prisoners. 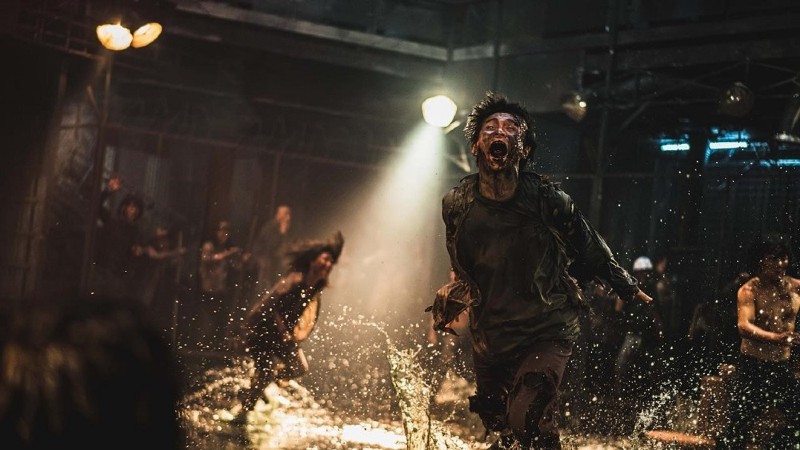 But Sang-ho’s story – however razor sharp the dialogue, or ostentatious the decor – never loses sense of its central core message, paying particular attention to the friendship that develops between the brooding Jung-seok, and the lighter, more revealing Min-jung (Lee Jung-hyun). Cornered into resigned submission, Jung-seok must place himself into the arms of a woman he himself neglected to save four years earlier from plague.

Humour lies in every frame, where inebriates, lieutenants and under age drivers urge each other on to win this most apocalyptic of races. Furnishing an anger that breaks with greater resolve than the crusade that re-introduced Jung-seok, the vehicles invite viewers to unleash their inner teenager. And this high-speed ascent into concrete, carnival ridden absurdity is every bit as brilliant, brutal and terrifying as the zombies that litter the crisp, kaleidoscopic screen.

The impressive images indulge in a Technicolor fusion of flares, fires and silhouettes of balletic bullet work. Shifting from vehicle to vehicle, Sang-ho lets the camera free to roam with the cars that drive more fearlessly than the story’s most outrageous beats.

Selected earlier this year for the Cannes 2020 label (the Festival that never was), this South Korean zombie outbreak thriller emerged as one of the first (perhaps even the very first, according to some sources) box office hits in Asia since the beginning of the pandemic.

Train to Busan 2 is out on Digital on Monday, November 23rd, and all other formats a week later. A terrific night’s entertainment, even if you can’t watch it on the silver screen.

A bungling bunch of cops take over a fast food chicken restaurant to watch a gang of criminals in the building opposite in this hilarious, South Korean genre-bender – from the London Korean Film Festival [Read More...]