"Dirty gem"
Roy Andersson's last film is less funny and yet no less potent than his previous features, and it is a fitting swan song for the peculiar Swedish auteur - on various VoD platforms from January 1st, 2020

It might seem preposterous that a brisk 76-minute film could be called About Endlessness. Being a Roy Andersson film, you’d forgiven for thinking this is a joke. This time, the master of Swedish deadpan changes gears and challenges the audience with its most unvarnished portrait of the human condition. Announced as his last movie, it’s a bittersweet swan song of one of Sweden’s greatest directors.

Stylistically, the feature feels of a piece with the filmmaker’s Living Trilogy and fans will recognise his idiosyncratic style from the get-go. Andersson was clearly set on doing something different though, incorporating a narration that guides the viewer through random splices of life in the manner Scheherazade narrates One Thousand and One Night (Andersson himself confessed this is where he got his inspiration from). Like a mystical being, she describes them as half-remembered dreams or memories plucked out of thin air.

At first, a procession of characters show up, profoundly marked by something they lack. A boy without love, a communications manager without shame, a man without trust, and most prominently, a priest without faith. The scene where the latter goes to a psychiatrist looking for help is pure cinematic gold and one of the best of Andersson’s career.

Midway through the film, the focus changes and things get darker, with death – and the characters’s reaction to it – being the subject of many scenes. Death is an integral part of life like anything else. This makes it more beautiful and also more horrific. 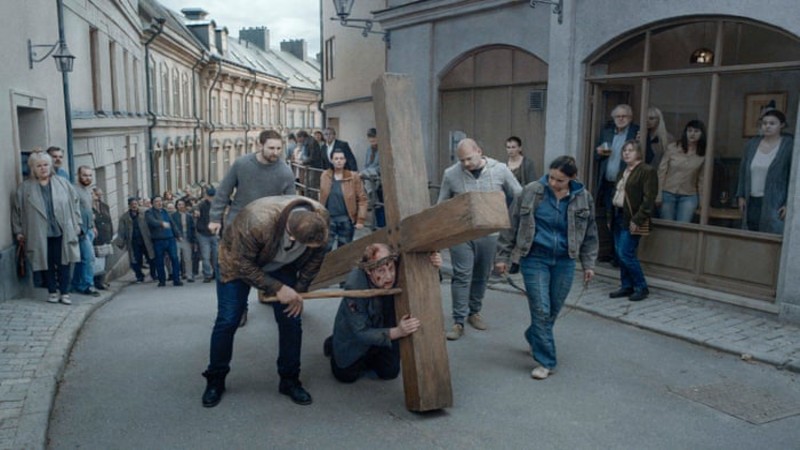 It allows for some jarring juxtapositions. The most extreme one is around the 47-minute mark: the shoe heels of a woman snap, suddenly smash cutting to a family murder (a man sobbing, embracing a bloody corpse). “I saw a man who wanted to protect the family’s honour”, the narrator goes, “and changed his mind”. For a couple of minutes, it’s impossible to feel anything but heartbreak.

If you’re thinking none of this looks like material ripe for comedy, you’re not exactly wrong. Andersson toned his humorous tendencies considerably down. He uses fewer surrealistic devices. There’s no outlandish make-up at sight. When he lampoons one of the most despicable historical figures of all time, he does so in a melancholic tone. These all-too-human stories go about themselves unconcerned about punchlines. The outcome is less funny but no less potent.

Unlike its predecessors, About Endlessness is more observational than critical. It accepts wholeheartedly that pain and joy are two sides of the same coin and that one of these is needed for the other one to be perceived.

Back at the psychiatrist office, when the priest asks him about meaning of a godless existence, he replies: “Maybe being content being alive”. That simple philosophy is at the core of About Endlessness – a film that dares, not only to have a potentially preposterous title, but to ask its viewers to look around and marvel at the wonders of everything around them.

About Endlessness is on Curzon Home Cinema on Friday, November 6th. On various VoD platforms from Friday, January 1st (2021).

Being a Human Person