Claes Bang opens the film as art critic James Figueras, delivering a seminar on art appreciation and how to discern provenance or forgery. A small audience is completely taken in by his authoritative and charming oration, as he spins a tale that describes the story behind a particular piece – a tale of love and abject loss – before dashing this fabricated construction on the rocks of truth. This dynamic and twisting lecture is intercut with moments of his homelife in a serviceably fashionable but sparse Milanese apartment: daily ablutions, exercise, breakfast. His face remains impassive throughout and the somewhat sterile life suggests a calculated operator with a transactional career in finance or auctioneering. A man with preoccupations for the bottom line. It is a deft and inviting beginning that suggests at once the central themes of duplicity, genuinity, outward appearances and deceit.

A shame, then, that the remainder of the film does not quite fulfil the potential of this backfooting sequence, ending up as muted and becalmed as the placid waters of Lake Como that backdrops much of the running time. Figueras is summoned to these lakeside idylls by long-time acquaintance and sometimes contractee Joseph Cassidy (Mick Jagger of the Rolling Stones, with a Richard Bransonesque, monied loucheness). This mogul of unflattering renown has engineered something of a coup. By means of fork-tongued persuasion and the kind of luck one makes for oneself, legendarily reclusive painter Jerome Debney (Donald Sutherland) is resident at Cassidy’s estate. The artist is cloistered away, understandably damaged and flighty after a gallery fire tragedy tragedy befell his oeuvre entire some years prior. The man is creating for the first time in decades and should these presumed masterworks be unveiled, the art world would be shocked into submission, connoisseurs and bank accounts alike brought to tears. 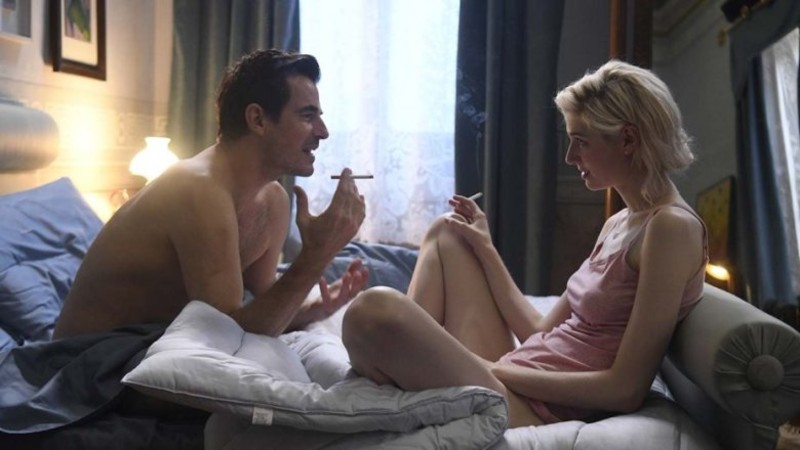 Figueras is ostensibly brought into the Como mansion as a house guest but secretly charged by the coercive Cassidy to pry into Debney’s affairs in search of answers to what lies within his garden shed of a studio. To help establish the pretence of invitation, recent conquest Berenice (Elizabeth Debicki) accompanies James. She brings her own metaphorical baggage on tour, true identity and motives uncertain. With the principals and set up of the film established, the narrative plays out in small dialogues between the personalities, each furthering their own occluded agendas. The tension ratchets together with the stakes and Figueras is pushed to increasing lengths in pursuit of his goal, powering the film towards more heightened territory as it unfurls.

It’s a heady proposition but The Burnt Orange Heresy never manages to fully emulate the high art mastery of its subjects. Langorous pacing befits the scenery but leaves the film feeling shallow. Likewise, it values itself on character intrigue and doublespeak but, excepting Jagger’s smiling cutthroat, everyone is too much of a cipher to inspire feeling, good or bad. Bang and Debicki work well together and with what they have but their roles are kept at a remove. This is a necessity for the plotting but even when all the cards are revealed the issue remains. Bang in particular does a great line in deceit – there’s a reason the BBC chose this relatively unknown Danish actor to head up their recent Dracula adaptation. Donald Sutherland is fine.

Stylistically, there’s a lot to enjoy, too. Gorgeous cinematography tends towards the ethereal, with washed-out hues of the lake and its surroundings in the misty autumn. The high-ceilinged manor is in the process of shuttering up for winter, pristine white sheets draping the upholstery. James and Berenice haunt this space as ghosts, dispassionate in their preoccupied verbal exchanges. It should all work but instead comes out feeling over-curated. A good psychological thriller demands repeat viewing but I feel that The Burnt Orange Heresy would suffer from repeat appraisal, revealing the cracks in the paint.

The Burnt Orange Heresy is in cinemas on Friday, October 30th. On Sky Cinema and NOW on Saturday, July 3rd. Also available on Amazon Prime.