Woman of the Photographs

"Greasy movie"
Twisted blend of horror, comedy and romance strikes the nerve of our dependency on social media - Japanese film premiered at FrightFest

This Japanese romantic-horror, set in a small town near the coast, follows solitary middle-aged photographer and retouching artist Kai (Hideki Nagai), who out on a forest trek encounters social media model and sponsored influencer, Kyoko (Itsuki Otaki). They meet abruptly when she falls off a verge trying to take a photograph, leaving a noticeable bloody scar on her chest. Unexpectedly, the two strangers do not go their separate ways, and when she observes him retouching a customers photograph in his shop, she asks him if he can erase the scar in her pictures. But when her social media profile suffers a drop-off in fan engagement, she begins posting images that show her imperfect beauty. Confusion sets in as she loses sense of the real versus the manufactured version of herself.

The early impression of Woman of the Photographs is of a gentler type of comedy, subverting our expectations of a darker tale. The cinematography and performances play to the beat of a humorous rhythm, and the interaction between the pair as Kyoko tries to engage with the silent Kai, who flinches at her touch, is wryly amusing. They offer the perfect juxtaposition of energetic sociability and detached stillness. Watching her work her way into his life, staying overnight without any physical intimacy, Kushida reveals his hand.

The art of the film in one regard is the unspoken. An emphasis is placed on observing how Kai nonchalantly responds to her presence, the etiquette of his actions, gestures and habits forming a strong sense of who he is. This goes together with a few scenes with an unnamed customer, played by Toshiaki Inomata, whose daughter has passed and who knew Kai’s father. He speaks sparingly of not only his own personal tragedy, but gives us an insight into the solitary middle-aged man, and why he’s only able to engage with women by way of retouching their photographs.

Kushida’s skill is appreciating the value of words and silence, albeit using as few words as needed. The verbal restraint gives the emotions of the characters a weight, not only because it’s how Kai communicates, but it emphasises the internal world they all inhabit.This is a mental space that we must see and acknowledge, from which moments rich with feeling emerge. Inomata’s character illustrates this when he’s sparing with his words in an earlier scene, that informs a sensitive moment he shares with his wife later on. 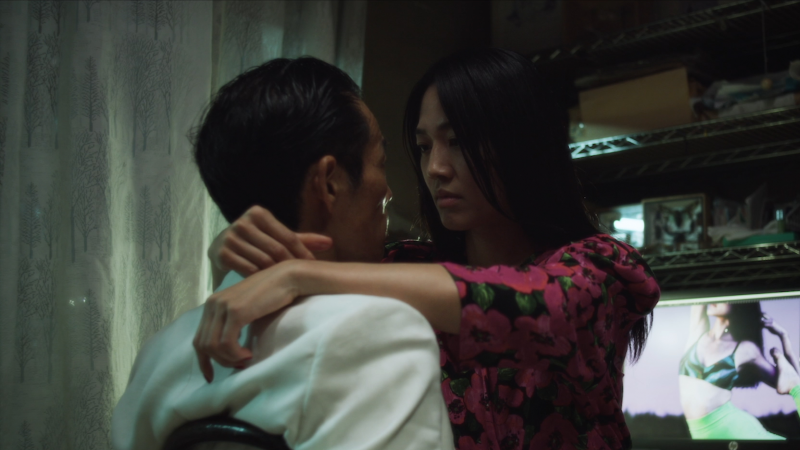 40 minutes in and the unsettling horror begins to emerge, although from the beginning the film feels deliberately askew. Unlike Jud Cremata’s single-shot American horror, Let’s Scare Julie (2020), Kushida embraces the edit. He’s not interested in smooth cinematography, he wants the jagged edges, he wants to use the back and forth cutting to jostle us. In addition, an exaggerated sound design almost echoes the noticeable scratching sound of Kai’s Photoshop pen in the early scenes. This approach makes the normal everyday world we can see onscreen feel odd, and goes beyond aesthetic to tap into a deeper idea of the levels of consciousness.

It is fair to say that Woman of the Photographs stylistically contrasts our mental versus our physical reality. It conveys something human – to be physically present in one place, but be elsewhere mentally and emotionally. There are moments late in the film where Kyoko appears to exist on two planes – in Kei’s apartment above the shop, but also in the sea, a place he would photograph her. She slips between a conscious awareness of her surroundings and the subconscious of her imagination. Lost in the imagery that relates to the confusion and pain of placing an emphasis on how others see her, and the way the interaction between the water, objects and her body are symbolic.

The female customer who introduces Kyoko to the idea of image manipulation says, “I believe that myself reflected in the eyes of others is my true self… We can love ourselves only through others’ eyes.” The themes and ideas at the heart of the film are unlikely to decrease in their relevance, cautioning us to the danger of finding a sense of self-worth and acceptance through others. Instead we need to show ourselves compassion and understanding so that we can discover a sustainable feeling of personal value.

For many of us, there is a deep intimacy we share with Kyoko’s experiences. Kushida is touching upon human nature and its inevitable vulnerabilities that are a common source of anxiety. In this context, Woman of the Photographs is a horror story about what it is to be human. Its visual playfulness and ideas many of us can relate to through social media interaction and a basic need to be loved and accepted, makes it difficult to not be enraptured and unsettled by this impressive feature directorial debut.

Who better to skewer Trumpism than a similarly outdated reality star? Dirty movie is now on Amazon Prime [Read More...]

This single-shot American horror, with its nod to our love of scary stories and pranks, is the perfect late night treat - from FrightFest [Read More...]

Our dirty questions to Jennifer Sheridan

The South London director recognised for her editing work in the television series The League of Gentleman talks about her debut feature: ROSE: A LOVE STORY, in an exclusive interview [Read More...]