"Dirty gem"
Who better to skewer Trumpism than a similarly outdated reality star? Dirty movie is now on Amazon Prime

Fourteen years have passed since Borat first ‘VERY-NICEd’ and high-fived his way across America and onto the big screen. For individuals, things have arguably changed for the better. Life expectancy, poverty, Tthird Wworld inequality – by these metrics, we’re on the up. Realistically, however, in terms of the big picture, the world is unequivocally in the toilet. It’s either melting or on fire, depending on your latitude, and the global pandemic is again accelerating just in time for Christmas. Political discourse has stagnated, a well poisoned by the pernicious influence of social media and Donald fucking Trump sits athrone this empire of dirt. Kanye West is still a thing.

It’d be funny if it wasn’t so depressing. “Satire is dead”, they cry. Morris can’t be bothered. Iannucci has abandoned us for space (see television series Avenue 5). We have been left to inherit the world that we deserve. What better time for the return of Borat, to hold an unfiltered mirror to the pigsty reality of the US of A?

Alongside the recent television show Who Is America?, Borat Subsequent Moviefilm is a statement of intent from Sacha Baron Cohen. He, at least, is sticking around. He has publicly cited the insidious rise of racism as his rallying point for his recent reactivation. Whilst the showy villainy of Trump and his Twitter rants have been drawing fire, the Overton window of acceptability has been opening in the wrong direction under this cover, normalising everyday hate speech and racism. As the character of Borat proves, it takes very little prompting to get the great white American public to stray into deeply racist bigotry. The sheer willingness of otherwise average folk to enter these grounds is astounding and should unreservedly be challenged – now more than ever.

The premise of the film neatly incorporates the intervening years since the original film. Following its release, Kazakhstan has been pilloried as a laughing stock and Borat interned at a work camp by the country’s Premier. However, following the unpleasantly measured tenure of the Obama administration,Trump and a host of right-wing world leaders are in and the premier wants to be acknowledged by this ‘strongman’ club. Borat is retrieved, cleaned up, booted and suited to go on a diplomatic mission to bribe vice-president Mike Pence as a means to this end. 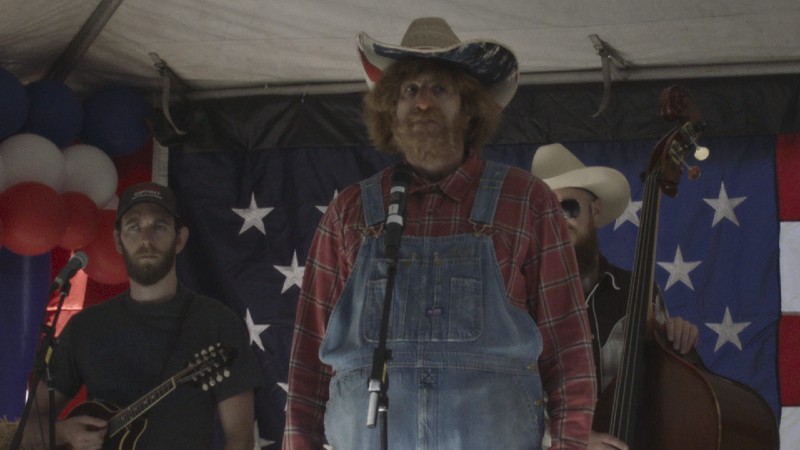 The main thrust of the film is thus targeted towards Trump and his lackeys but there is a lot of ground covered on other timely themes. Racism, yes, but also the role of social media in perpetuating QAnon, Holocaust and coronavirus conspiracies is explored. Female rights, reproductive or otherwise, are handled by the inclusion of daughter Tutar (Maria Bakalova). Much has been made elsewhere of Bakalova’s winsome performance but the real magic is how her presence allows for the continued hoodwinking of a public that recognises Borat from his last voyage, together with a broad range of other disguises for Baron Cohen.

Borat himself is the big ticket item, though, and fortunately America does not lack for prepper-type Southerners or persons otherwise sheltered from the cultural aftershocks of his first outing. Best of all is the sequence involving Jerry and Jim, two hunter-types encountered in the empty streets of the US lockdown. Borat ends up staying with them for an indefinite period, apparently establishing a friendship that belies belief. They call him out for his own conspiracy beliefs whilst being totally indoctrinated to the batshit QAnon stuff. Quite how this is managed by the production team is unknown. A how-it’s-made follow-up in the style of the BBC nature documentary post-shows would be fascinating but likely impossible. It’s a marvel how they manage to get such good camera coverage. Besides, better to see the Wizard of Kazakhstan in all his majesty and not the soft-spoken, erudite figure behind the curtain.

Beyond stunting on the unsuspecting public, there are a lot of scripted elements in either the dependably shabby Kazakhstan settings or the makeshift camps of Borat and Tutar. For a film that places Baron Cohen at the forefront, it’s a team effort behind the scenes and there are a whopping eight names on the screenplay credits. Their attention to detail really sells these more artificial moments – a Disneyfied retelling of the Melania story and a Kazakh government-issued guidebook to keeping a daughter are particular highlights. Similarly impressive is the way that people or events are encountered and elaborated upon in successive scenes for an evolving narrative. A chance cupcake treat leads to a pro-life Christian pastors, leads to a recurring prop that symbolises their family bond. To reveal any more would be churlish.

Sacha Baron Cohen vehicles are gifts that keep on giving, with the almost equally entertaining fallout that follows. Much has been made of the Rudy Giuliani debacle but the film’s actual crescendo, back in Kazakhstan, is more entertaining by miles. Altogether, there is a clear case to be made for Borat’s return and it is handled with aplomb. If your whistle is whetted for more hapless members of the public being taken unawares, the criminally underrated Nathan For You series is possibly a lot funnier and shares some DNA with Borat 2, having had some episodes helmed by director Jason Woliner.

Borat Subsequent Moviefilm is out now on Amazon Prime: