"Greasy movie"
This single-shot American horror, with its nod to our love of scary stories and pranks, is the perfect late night treat - from FrightFest

Following her father’s death, Emma (Troy Leigh-Anne Johnson) and her younger sister Lilly (Dakota Baccelli) have moved in with her cousin Taylor (Isabel May) in a pleasant and quiet suburban American neighbourhood. She discovers her cousin and her friends, Madison (Odessa A’zion), Paige (Jessica Sarah Flaum) and Jess (Brooke Sorenson) enjoy playing and filming scary pranks. When Taylor tells Emma a spooky story of the house opposite that’s rumoured to be haunted, Madison suggests they sneak on over and scare the new neighbour Julie, who is home alone. It will be the last prank they play, as the night is plagued by strange incidents, and one by one, they begin to disappear.

Let’s Scare Julie is a chamber piece, consisting of a small cast of characters that aside from a single scene, unfolds in one setting (inside or on the grounds of Taylor’s house). The first 32 minutes of set-up, more than a third of the film is pure adolescent silliness, although it does introduce us to the group dynamic, as well as the ghost story that will become more than a scary story. It’s likely to provoke disinterest from some audiences as much as it engages others.

We feed off the energy of the characters who humorously bounce off of one another. Madison, the wicked trickster of the group juxtaposes with Emma’s mellow nature, and the other characters fit somewhere between the pair – towards the playfulness of their trickster friend. Whereas young people in other genre films, including Halloween (Carpenter, 1978) could feel put on, these characters feel genuine teenagers, and in spite of the adolescent silliness it’s enjoyable being in their company.

Cinema is storytelling one shot at a time, and whenever a film features an uninterrupted take, it draws attention. Let’s Scare Julie joins the company of films including Rope (Alfred Hitchcock, 1948) and Victoria (Sebastian Schipper, 2016), that have abandoned the edited form of cinematic storytelling. The continuous take however becomes a double-edged blade, and Cremata would have been wise to follow in the footsteps of Orson Welles, who used the continuous take in the opening tracking shot of Touch of Evil (1958), or Martin Scorsese, who used it to follow Henry Hill’s walk through the nightclub in Goodfellas (1990). The point is to not be as restricted in its use, but to understand that you cannot will it to replace the cut, if the edit is required. 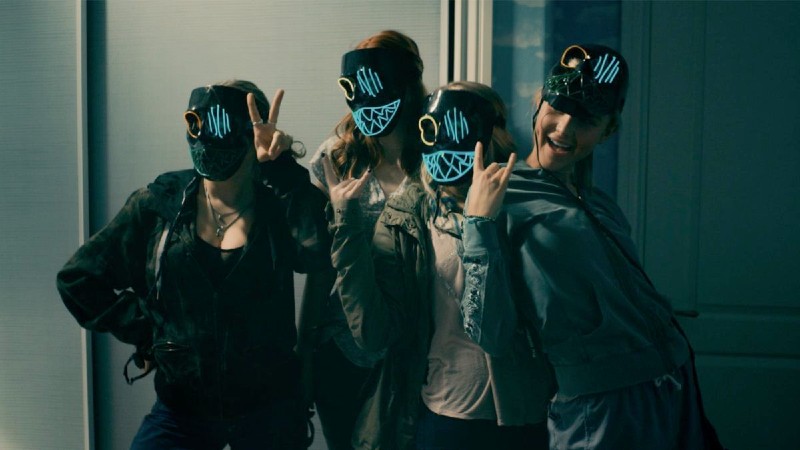 The omission of a cut allows the dialogue exchange between Emma and Taylor in one scene to develop a connection or shared moment. In the larger ensemble scenes, its absence creates a flow of consciousness, not only real time, but a rhythm that’s dictated by the characters. This is one reason why they feel genuine teenagers because the removal of the edit removes the artifice of cinema, snd allows for a natural flow and rhythm.

Yet the cinematography conflicts with the narrative when it forcibly condenses the timeline of events as Taylor, Madison, Paige and Jess attempt to pull off their prank on the unsuspecting Julie. It’s an issue that an edit would have resolved were it not for Cremata’s commitment to the uninterrupted take, and it creates a nagging preoccupation with the events not fitting comfortably in the timeline.

Let’s Scare Julie is an enjoyable experience from start to finish, whose simple premise is complimented by both the continuous shot and the claustrophobia of the chamber piece. An effective touch is the combination of suspenseful scenes that we witness versus those we only hear over a phone, or hear second hand from one of the characters. Cremata appreciates the visual, but he also values the effectiveness of obscuring our sight, and forcing us to engage in the horror with our imaginations.

There inevitably comes the moment where we find ourselves asking what’s the finish? The creativity of the film beckons an imaginative close, but Cremata understanding the limitations of choice, decides to not go with the ending that it’s an elaborate prank, that would risk leaving us feeling cheated, and goes with one that protects the film. It’s regrettable that he fails to capture that gasp of horror and make use of the music on the credit score that wakes us from this nightmarish tale by lingering a tad too long on his beloved uninterrupted take. By it’s conclusion, the admirable creative ambition that merges the simplicity of narrative and the creativity of form tries to reach beyond itself, and Let’s Scare Julie reveals itself to be what it is – a simple ghost story.