"Dirty gem"
Argentinean drama about young boy ‘disappeared’ by the police is a universal criticism of a society rife with systemic inequality and injustice - on VoD on Friday, April 9th

One stormy night, an agitated young man knocks loudly at the door of the home of Cecilia (Elisa Carricajo), a middle-class economics lecturer. Separated from her husband, Cecilia lives alone with her young son. The man who knocks at her door is Kevin (Eliot Otazo), the son of her housekeeper, Nebe (Mecha Martinez). Frightened, she doesn’t answer, and when she learns that the police ‘disappeared’ him, she’s forced to confront feelings of guilt.

The premise is a simple one, which director Márquez and co-writer Tomás Downey’s stripped back emphasis on the dramatic, especially in the first act, echoes. The film opens with a focus on home and work life as a series of processes that characterise Cecilia’s everyday life, that frames the story as a meeting between art and life.

A Common Crime is realism without the heavier notes of kitchen sink drama. This presentation doesn’t permit the story to either escape, nor transcend the mundane of everyday life. It also compliments the inescapable guilt Cecilia will experience and the inescapable reality of systemic inequality. The latter allows the film to resonate not only with Argentinian audiences, but internationally, as systemic injustice remains a confrontational issue.

In comparison to her housekeeper, Cecilia is a person of privilege, and yet with an impending interview for a new role, she infers a feeling of fragile self-doubt. But is this self-doubt genuine when both her academic colleague and her mentor are reassuring of her professional progression? Any self-doubt serves the purpose of juxtaposing class problems. In a dinner scene, her colleague tells her husband that success at the upcoming interview is vital to Cecilia’s future. Listening to her friend explain this, she retracts the food from her mouth, spilling down her chin and on to her plate. The scene takes place after Cecilia has learned of Kevin’s murder, and finding the food unpalatable is symbolic of middle-class guilt, and the nausea of trivial middle-class problems.

There is clearly the crime committed by the police, but Cecilia’s decision is not borne not out of malice, nor an intention to harm Kevin, but out of fear. We watch her look out the window, crouching down to stay out of sight as he bangs on the door and calls out. We’ve only been briefly introduced to Kevin in one scene, and Márquez encumbers our point of view so that his identity is unclear. He positions us to identify with Cecilia’s fear, and not what we will later learn is a fearful Kevin seeking refuge. 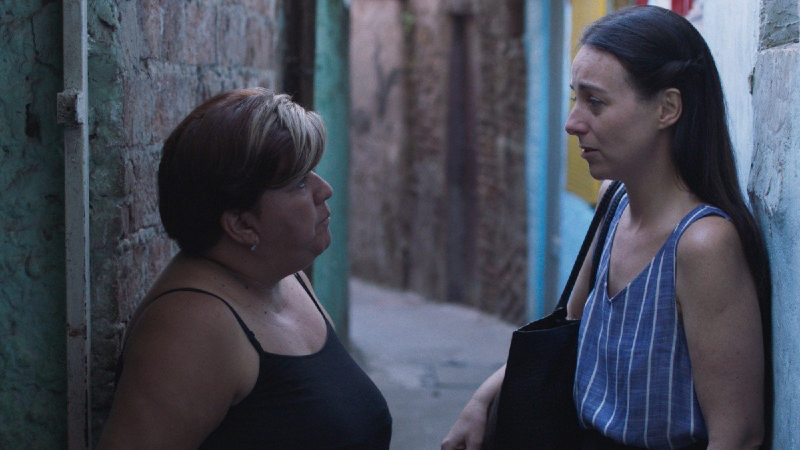 We are unable to condemn Cecilia – there is no crime for her to answer, and yet we feel conflicted. Márquez, Downey and Carricajo merge the warmth of Cecilia’s maternal nature with an intellectual coldness. What makes her compelling is the mix of warmth and cold, of kindness and sternness as a mother and educator that allows for her to provoke these necessary feelings of conflict in the audience. We sympathise with her, but together with her colleagues, she frames the compromised integrity of the intellectual community by the class system. Their middle-class privilege has an air of nepotism, individualism and ignorance, with an interest in nurturing intellectualism over any genuine sense of social awareness and engagement.

The image of Cecilia cowering in the dark is about silence and an ignorance towards the realities outside of her own social experience, as much as it’s about fear. The guilt after learning of Kevin’s murder should be Cecilia’s awakening to what is a common crime, yet her response appears to be partly self-centred. She has empathy for Nebe, but is unresponsive to the reality of systemic crime. Even as we look to the seemingly mutual respect Cecila and Nebe share, this can be reduced to the usefulness to her middle-class employer.

Márquez and Downey’s interest in observing the character, rather than heightening the emphasis on the events, however significant, serves to remind us that life goes on. It’s not that there is an indifference to death and suffering, rather it’s that our emotional response to death is superseded by the instinct for self-preservation. Cecilia’s feelings of guilt are genuine, but the characters and events are orchestrated to offer a social critique of the class system, that’s also a universal criticism of the failure to protect the vulnerable in society.

A Common Crime impresses as an aesthetic piece of filmmaking. Minimising a reliance on the cut not only compliments the observational nature of the film, but shows Márquez’s craftsmanship. The action revolves around the static camera as characters move in and out of frame. The background is filled with activity and draws our attention from the character in the foreground. As one would pick up on nuanced detail in a painting, Márquez treats the cinematography as a transitional form of painting. The images are framed not like cinematic shots, but as individual paintings that are in a state of transition. Not only does art meet life in A Common Crime, but film meets painting.

A Common Crime played at the BFI London Film Festival, when this piece was originally written. It’s out on various VoD platforms on Friday, April 9th, via Sovereign Film Distribution

Northern Ireland’s past is presented as an uneasy, yet emotionally rewarding story of sibling relations – from the BFI London Film Festival [Read More...]

This hagiographic feature commemorates one of the most astonishing photographers in his field, but how does his work match up to modern standards? On Curzon Home Cinema and Digital on Friday, October 23rd [Read More...]

One Night in Miami

First-time director imagines the meeting of Muhammad Ali, Malcolm X, Sam Cooke and Jim Brown (which never happened), and the outcome is surprisingly convincing - out on VoD on Friday, January 15th [Read More...]