Striding Into The Wind

"Mostly clean movie"
Chinese road movie about a cranky film student who sets off from Beijing to Inner Mongolia offers insight into the country's vastness, but is sorely lacking in excitement - from the BFI London Film Festival

To some, few clichés are as beguiling as ‘the grass is always greener on the other side’, especially when it pertains to travel. Mountains, beaches, the open road; wherever one wants to go, they expect joy, excitement and catharsis. However, the truth may be closer aligned to that other phrase, “same face, different place”.

Kun (You Zhou), a recalcitrant and disillusioned young man, is certainly seduced by the former. During a break from his film course in Beijing, the sound recordist buys a battered old Jeep from a car dealer, who inspires him to take it off-roading across Inner Mongolia. The vast grasslands of the Mongolian plains are a heady thought, yet none of this excitement transfers to Wei Shujun’s Striding Into the Wind, which is rendered torpid by a bloated documentary style that focuses on, oh well, not very much.

Many scenes unfold with the camera fixed in place as people enter and leave the shot, getting on with their business. Typically, this amounts to improvised chattering which is all very natural but not very interesting. Scene after scene outstays its welcome, causing your eyes to wander as the film preoccupies itself with banalities. So much of its 135 minutes could have been nipped and tucked, allowing time develop the personality of Kun, an insouciant figure in baggy trousers and a loose, flowing shirt. He’s all mullet and morosity with very little registering on his glum face, lacking the depth and sympathy of Christopher McCandless, the real life figure of Into The Wild (Sean Penn, 2008) who rejected society for an ill-fated journey across the American continent. 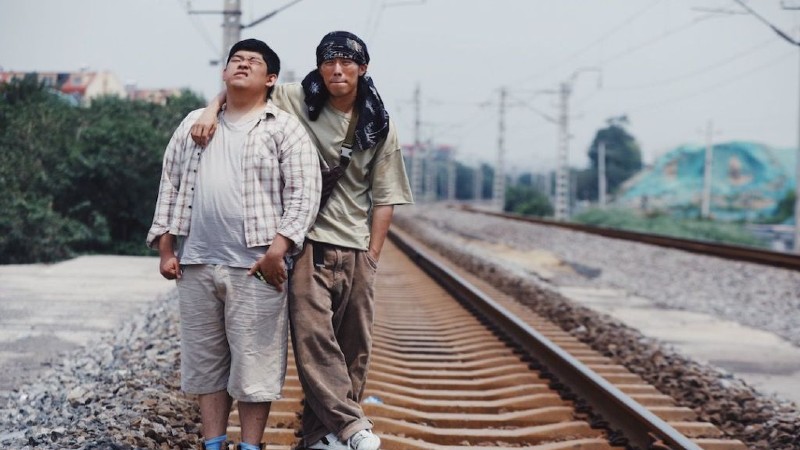 We follow Kun for what feels like several hours as he meanders from scene to scene, attempting to raise funds for his trip. The camera floats around, observing both Kun and the wider environment, providing a fascinating snapshot of the Chinese vastness. Some of Kun’s exchanges resonate, too, especially when his girlfriend points out his lack of action, “You said you’d go to Tibet… the Khingan Mountains… stop sticking your head in the clouds.”

Eventually, Kun makes the trip with a film crew, yet the experience is far from what both he and us, the viewers, hoped for. Frustratingly, Striding Into the Wind does have something to say about the futility of young men’s anger and travel’s failure to break one’s malaise, but it says them in a manner that utterly fails to engage either the heart or the intellect.

Striding Into The Wind has just premiered at the BFI London Film Festival. Its was shortlisted at the Cannes Film Festival in 2020 as one of only two finalists among Chinese-language films.

Mongolian film by veteran Chinese filmmaker is both a pleasant and audacious surprise, premiering at the BFI London Film Festival [Read More...]