Based on its imagery and synopsis, Limbo may appear to be a grim piece of social realism; a Loachian call to action in the vein of I, Daniel Blake (2016) or Sorry We Missed You (2019). However, Ben Sharrock’s film is a quirkier affair than that, with shades of Local Hero (Bill Forsyth, 1983) and Withnail and I (Bruce Robinson, 1987).

The story concerns Omar (Amir El-Masry), a young Syrian refugee sent to a remote Scottish island to await the outcome of his asylum request. There, he meets a cross-section of the refugee crisis, all of them young single men from places such as Afghanistan, Nigeria and the Middle East.

These characters put a human face on the crisis. “There is better signal in the middle of the Mediterranean,” laments one African man as he observes the harsh Scottish terrain. Indeed, there is an elemental force in Limbo; the breeze, the cold and the emptiness cast a stark pathetic fallacy over the men’s purgatory. The titular limbo has lasted 32 months and five days for Farhad (Vikash Bhai), another middle-aged Afghan at the mercy of the Home Office. Just how long Omar will have to wait is a crushing prospect. 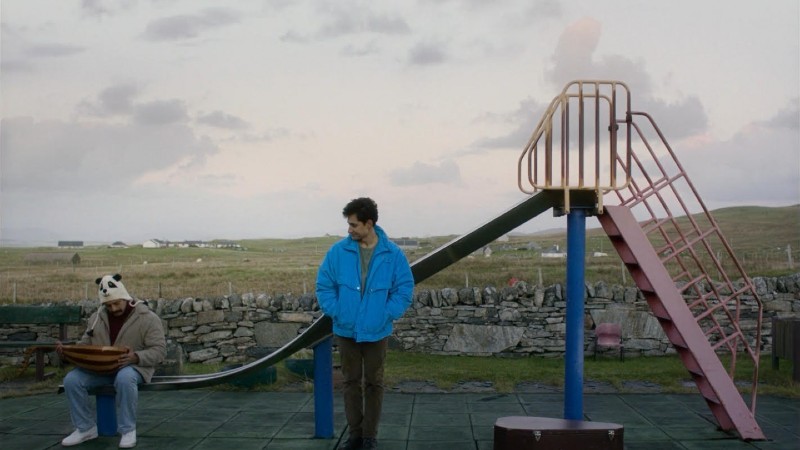 The bleakness of the Hebrides is compounded by their dour accommodation, which is practical but not conducive to any kind of happiness. The walls are pallid, the carpets are hideous, and the blocky television plays low-resolution episodes of Friends, that milky fodder of a sitcom.

Again, Sharrock’s film is not relentless miserablism. The monotony and anguish of these men’s lives is often drily humorous, especially the moments with Helga (Sidse Babett), an offbeat official with corkscrew hair, and Boris (Kenneth Collard), her paunchy sidekick with a 1970s’ wardrobe. Together they teach them about social norms and run childish exercises such as ‘I used to’, which descends into farce as it exposes the refugee’s boredom, “I used to… be happy before I came here”. It shows an understated wit that is a welcome creative choice from Sharrock, who also wrote the screenplay.

The quirks and pathos of Limbo’s characters are framed by Nick Cooke’s novel cinematography. The 4:3 ratio that gives the aesthetic a photographic quality, like an old viewfinder. It serves to highlight the men’s constriction, how they’re afforded a mere snapshot of a country that may reject them in an instant.

Limbo is showing at the BFI London Film Festival. It will be on Mubi soon!