"Dirty gem"
Northern Ireland’s past is presented as an uneasy, yet emotionally rewarding story of sibling relations – from the BFI London Film Festival

Two sisters are reunited when Kelly (Nika McGuigan), missing and feared dead, returns home. Lauren’s (Nora-Jane Noone) conflicting feelings of relief and anger are complicated by her sister’s mental fragility, and the intense bond of a shared childhood trauma. Living on the Irish border in a community that was torn apart by the Troubles, Kelly and Lauren’s anxieties are as political as they are personal, and her return unsettles her sister’s peace at home and in the community.

In an early scene, Kelly startled by a barking dog runs off and passes a placard that reads, “Prepared for peace. Ready for war.” What should we make of these hand-painted words that are an intentional backdrop?

Set in the present day, Brady opens her drama with archive news footage around The Good Friday agreement, and the pressure on the British government to protect the peace agreement during Brexit. The words are a cry of the difficult reality of forgiveness in a country scarred by extreme pain, and the embers that continue to burn in an imperfect and fragile peace agreement. There are those still spoiling for a fight, those who see the agreement as a betrayal.

In the context of Brady’s study of sibling relations, Kelly and Lauren have been ripped apart and shaped by the political turmoil. As the eldest, what Lauren knows about their mother’s death that Kelly doesn’t, emphasises that which is not spoken. In one scene, Brady shows us the compromises that have made peace possible, that lands with a visceral and unsettling force. Brady taps into looking past the truth of what has happened, for the sake of moving forward. She also addresses the lineage of suffering, passed down from one generation to the next. 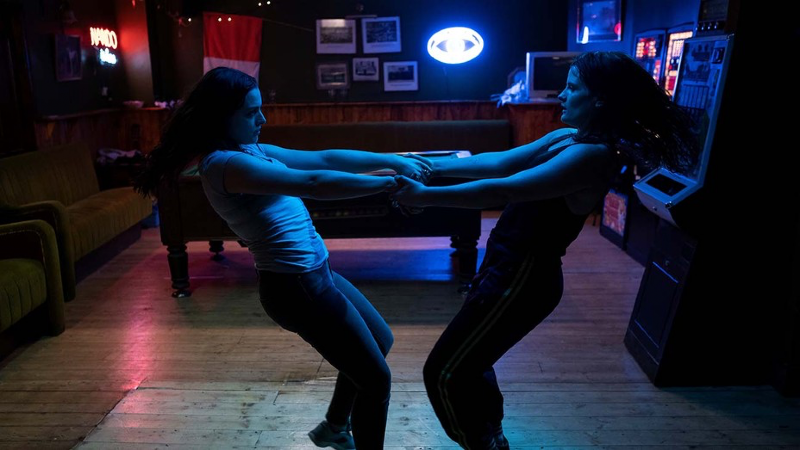 British audiences with any sense of conscience should question their governments ignorance during this Brexit process, and the foolishness of any action that could reignite the troubles of the past. In one scene Kelly swims in the lake which sits on the border, and she tells some teenagers who are also in the water, that you can simultaneously be in the south and the north. It’s a simple moment, but next to a darker moment when out swimming, Kelly infers the peace of no border, and the danger of a border.

Wildfire goes beyond the politics to offer us a glimpse of the human cost of the violence. It’s an Irish story about the past through a story of sibling relations. Brady appears to suggest that future generations will find a distance from the pain, even if the hurt from the Troubles can never fully heal. The trauma and its scars are a part of the history of Northern Ireland, just as the siblings can never disavow, only resolve their personal troubles.

The dog in this early scene is a metaphor for the unresolved past snapping at Kelly’s heels, and as the story unfolds, the words are those of certain persons. Kelly remembers her mother saying, “This place is hell. With those murderers free, I’ll never be at peace.” Neither daughter is prepared nor ready – they are representative of those that are caught in the crossfire of the Troubles, just as their mother was. Reconnecting and confronting the past, secrets are revealed, and together they are entrenched in their personal conflict to find a peace their mother knew she never would. This sibling relationship is symbolic of the country’s story – the difficulty to distance oneself from the past, and the courage and strength to find a means to move forward

We hold our breath as we watch Lauren in particular, who has a husband, friends and a job, stand on the precipice of holding her life together versus it falling apart. The emotions Lauren experiences reach out from the screen, possessing a raw reality as she simmers or boils over. For anyone battling issues of anger and frustration, feelings of hurt or anxiety, Wildfire will strike a raw nerve. It’s a film that compels you to watch until its conclusion, but through identification with how one thing being said or done spirals out of control, versus the compartmentalisation of thoughts and feelings, it’s an uneasy yet emotionally rewarding experience.

Wildfire is showing at the BFI London Film Festival

The second feature by David Cronenberg's son is a terrifying and psychedelic sci-fi starring Andrea Riseborough, and one of the best films of the year - now also available on Shudder [Read More...]