"Greasy movie"
A brand new PAWSpective: see the world from the eyes of our best friend, in this innovative and enrapturing little doc - now also available on Netflix

Never before – to my knowledge, at least – has cinema verite been applied to the lives of stray dogs. Filmed in Istanbul from 2017 to 2019, Stray gives you a unique perspective of the city, one that is approximately 20 inches high and liable to be petted. That is because the camera, operated by director, producer and editor Elizabeth Lo, follows the furry subjects from their point-of-view as they wander along the streets, beaches and building sites of Istanbul.

It is an unsentimental ode to man’s best friend, referencing Greek philosophers such as Diogenes, one of the founders of Cynic philosophy, who believed that ‘dogs and philosophers do the greatest good and get the fewest rewards.’ This preference for dogs can be found in today’s cynics and misanthropes, of course.

The focaliser is Zeytin, a sturdy, tan-coated bitch. She serves as our eyes and ears of the city, bringing smiles to those she meets, even those unsure of her. She also eavesdrops for us, catching everything from idle chitchat to contentious rows. Humans come and go, offering petting hands and sometimes food. A few of them stick around, though, namely a group of homeless Syrian refugees who stake out various doorways and building sites. They’re all kids, some of them barely teenagers, and they spend their days sniffing glue and scouring for food. Zeytin is also embraced by a group of older homeless men as they warm themselves around a small fire. 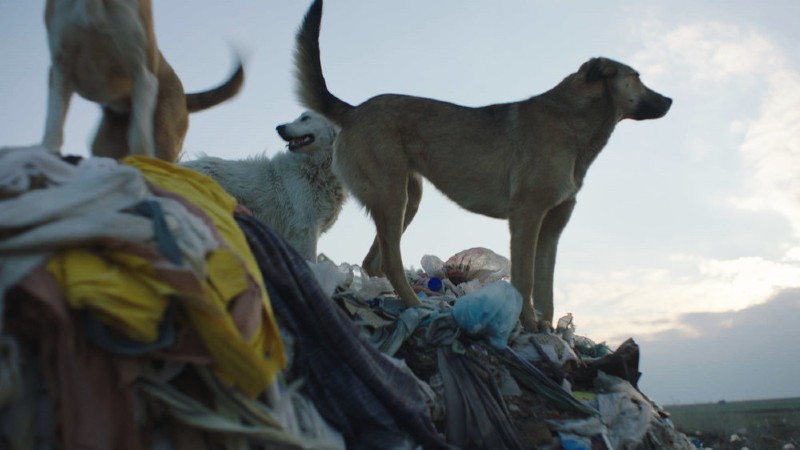 It is here that Lo’s film draws parallels between stray dogs and, for want of a better word, stray humans. They’re united in their nomadism and alienation, forgotten or ignored by wider society. Like Diogenes on the streets of ancient Greece, these people are often the most charitable to Zeytin and her friends Zazar, with whom she fights for discarded bones, and Kartal, a precious black and white puppy. They’re certainly more charitable than the Turkish authorities, whose attempts to exterminate Istanbul’s strays have been reduced, through public outcry, to the occasional boot or water cannon.

We see Zeytin navigate this milieu day and night, giving a tangible insight into the margins of Istanbul society. One may wonder how a dog’s perspective could sustain a 72-minute running time, and Stray can feel longer than it is. However, Elizabeth Lo’s meditative debut feature remains an absorbing, novel piece of work.

Stray showed at the BFI London Film Festival 2020, when this piece was originally written. On Netflix on Friday, April 1st. Also available on other platforms.

Man's cruelty to man's best friend is merciless exposed in Russian film Space Dogs, one of the most bizarre documentaries ever made! On Mubi in September [Read More...]