Poet, photographer, musician, painter, swordsman, polyglot, equestrian, knight of Denmark; man does it all. It goes some way to explaining how Viggo Mortensen’s directorial debut can be so capably constructed. Falling showcases spectacular cinematography of the American outdoors, a thoughtful piano-led score and effective performances – all in service of a difficult narrative told with a non-judgemental eye.

This is a complex characterisation of Willis Peterson (Lance Henriksen) in his extremely advanced years. Formerly an overbearing and controlling bastard in the mould of so many 1960s Republican rancher types, now just a vulnerable old man. Nobody can say they actually like him and his expletive-ridden, unpleasant ways. His mind is shown to be slipping away in repeated episodes and living alone on his New York state farm is increasingly untenable. Son John (Mortensen) brings him to LA in search of a residence within sensible distance of himself and sister Sarah (Laura Linney).

Why, exactly, they would want him near is questionable. Willis has been menacing his children from birth, driving their mother Gwen (Hannah Gross) away in the process. The everyday injustices wrought by Willis upon his family are covered in extensive flashbacks. Indeed, almost half of the film is devoted to the upbringing of John and Sarah in the shadow of the farmhouse. The question of out-and-out violence is unclear but Sverrir Gudnason brings such a frisson of danger to the role of younger Willis that it isn’t hard to imagine. 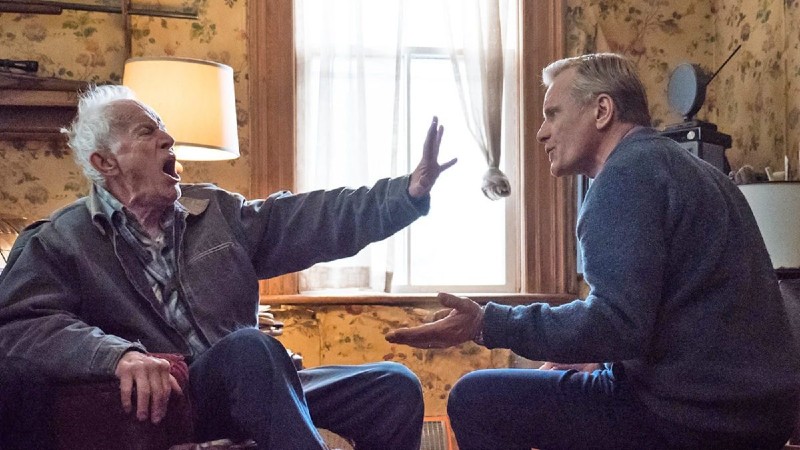 Recoiling from this treatment, John has built a life on the other side of the country and spectrum to that of Willis’s. Chinese-Hawaiian husband Eric (Terry Chen) and their adopted Mexican daughter Monica (Gabby Cells). Expectedly awkward moments follow. Whatever weak filter that Willis used to possess has been lost with age and the casual bigotry is relentless. The constant name-calling slides off of John, who expresses his desire to avoid the massive blowouts of previous visits. However, the veneer of unflappability is eroded with each “fairy” or “faggot” slung his way.

Some of these outbursts are truly abhorrent and the audience is kept captive as the camera centres on Henriksen’s wizened features. The one redeeming feature is his doting relationship with Monica – on paper a prime target for his relentless ire. There is also the suggestion that he gets on better with nature than people. Each trip to the past is accompanied by elegant imagery of countryside moments: morning dew on a wildflower, snow-blanketed plains, animals of every stripe. It’s implied that these are directly drawn from Willis’s memories – which is only possible if he noticed this beauty in the first place.

Whilst admirable to portray this other side, the constant outbursts are wearing. Together with some of the more synthetic family scenes, this holds the film back from being an unreserved success. Still, Mortensen has come out of the directing gate running. It will be interesting to see if he stays with the family-led stories or moves onto something of a larger scale.

Falling premiered at the San Sebastian International Film Festival, when this piece was originally written. It’s out in cinemas across the UK on Friday, December 4th.