"Dirty gem"
British drama paints a credible portrait of loneliness at old age, with subtle yet harrowing reminders of our physical limitations and mortality - now also on Sky Cinema and NOW (as well as other VoD platforms)

The grandchildren are playing with the two adorable pooches on verdant hills, while goats graze and sexagenarian love blooms. The elderly love birds practise their scarce Spanish with a very thick accent: “Hola, ¿cómo estás?”.There’s plenty of tea, a game of draughts and old songs. Sounds like a very British feast of cuteness. Right?

Wrong. This is not a romcom. It’s hardly funny, the comedic elements duly diluted in a far more stern plot. Not quite a walk in the park. And this is not a movie about dogs, either. Our furry friends are entirely secondary. Here it’s the people who do the walk. And the talk. In fact, this a surprisingly human drama. Thankfully for us viewers the titular 23 walks do not come to fruition. The story is not structured outings in the green.

Fern (Alison Steadman) is a 60-something-year-old divorcee. Her husband left her for his much younger secretary. “What a cliche”, she sums it up. Dave (Dave Johns) is a widower of around the same age, his wife having passed away a couple of years earlier. Dave has a child and two grandchildren, while Fern does not have any offspring. Or at least that’s what they tell each other, until the dark secrets gradually emerge. Everyone of us has some sort of baggage. Naturally those who have lived more than six decades have a full trolley.

They meet while walking their respective pooches on the hills of Hampstead Heath, with a spectacular view of London in the background. Dave owns a friendly German shepherd called Tilly, while Fern has a yappy and feisty Yorkshire Terrier called Harry. Not only are their dogs and family histories very different, but they also have colliding personalities. Dave is a garrulous and gregarious Northern type, while Tilly is a far more reserved and cranky Londoner. But Dave gradually breaks the ice, allowing Fern’s protective facade to collapse, revealing an affable, kind and vulnerable human being underneath. 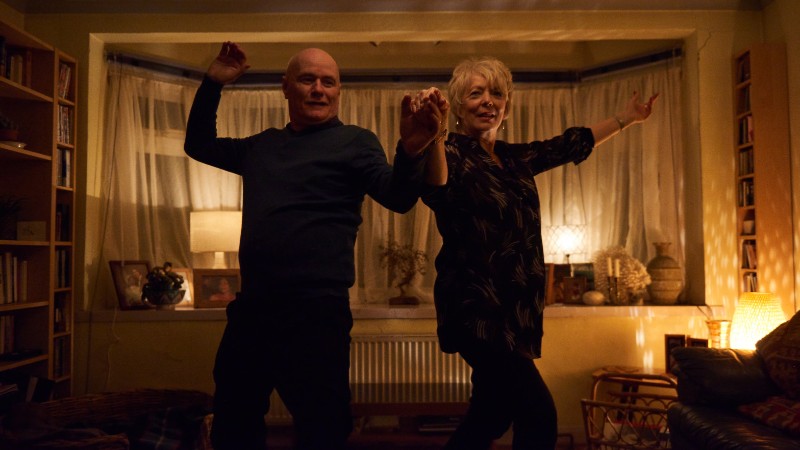 What initially looks like a romantic comedy very quickly morphs into something far more serious and profound. Paul Morrison, who both directed and penned the film, injects a dash of family tragedy within the first 30 minutes of this 100-minute movie, and then proceeds to add dollops of social realism. At times, it feels like a Ken Loach movie, with despondent characters failed by the system in more ways than one (this is helped by the fact that Johns is the real Daniel Blake). Death is also recurring topic, with untimely passings leaving scars on both characters . On the more upbeat side, sexagenarian sexuality is painted in a vivid colour. Old people too can have great carnal fun.

This auspicious little drama provides a very palpable account of loneliness at old age, as the two protagonists grapple with grief and regrets, while physical and emotional challenges prevent their romance from blooming like the large rhododendra on the Heath. It raises a number of pertinent ethical questions about marriage, commitment and family duties.

The twists and turns of 23 Walks are mostly original. Unpredictable even. Much like the labyrinthic paths of the park where the couple first and also gingerly bond. But this is not an impeccable movie. Some of the dialogues are a little contrived, the score somewhat mawkish, preventing the film from achieving its full potential. Ultimately, it lacks the punch factor. Or perhaps a little bite.

23 Walks is out in more than 100 cinemas across the country on Friday, September 25th. Worth a leisurely stroll to your local theatre. On VoD on Monday, January 25th. On Sky Cinema and NOW on September 16th (2021).

Portuguese couple in London engage in a battle against social services in order to save their three children from forced adoption, in this very Loachian family drama - on all major VoD platforms on Monday, July 11th [Read More...]