"Greasy movie"
French drama eschews traditional male gaze cinema in favour of an intense, all-consuming affair shown from the perspective of an older mistress - out on VoD on Monday, May 31st

We’ve all been there. You meet someone new and they’re all you can think about. Every little thing that they say or do, you’re hung up, you’re hung up on them. Waiting for their call, baby night and day. You’re fed up, you’re tired of waiting on them. For Laetitia Dosch’s Hélène, Madonna doesn’t even scratch the surface. Cooking, sleeping, childrearing; all fall by the wayside as her very existence becomes a younger Russian man whom she is obsessed with. Every ring of the phone becomes a race back to a moment of sincere existence before the numbness sets in once more.

The unnamed object of Hélène’s passion has a wife back home in Moscow but is spending months abroad in Paris for reasons unclear. Thug, spy or something else entirely? All options are viable and inconsequential to the fire burning between the pair. Notorious bad boy ballet-dancer-turned-actor Sergei Polunin brings lithe danger to the role, along with his own scarred and heavily tattooed frame. A grim reaper and the faces of Putin and Heath Ledger’s Joker are just some of the highlights. Two concentric and opposed eight-pronged stars are apparently ancient Slavic kolovrats but a quick Googling shows the definite swastikafication to be a deliberate choice… In brief, you’d cross the road if you saw him coming.

The pairing of the two could seem odd at first glance. Hélène has a decade over her paramour and a stable career as a university professor of classical literature, not to mention her role as single mother to son Paul (Lou-Teymour Thion). Yet. Aside from French and bursts of English, their other shared language is raw and intense sex. Their onscreen interactions are split evenly between passionate, animalistic fucking or pillow talk that oscillates from playful to terse, as Hélène probes the Russian on his life and wife. 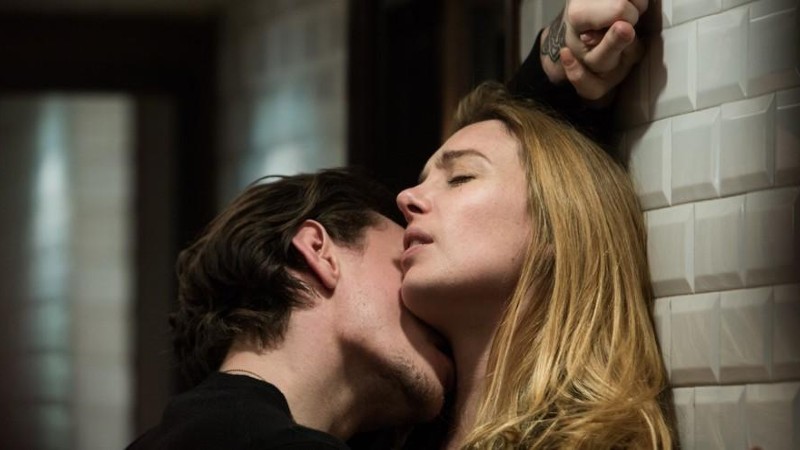 The chemistry goes both ways. Each confess to hitherto unfelt gratification in their partnering but this is not enough to sustain either in the waking world, particularly as the affair drags on through an unclear timeline of sporadic trysts. Seasons slide by in the background and the pressures of Hélène’s addiction spiral along with them. Outside of the bedroom the camera rarely leaves Dosch’s face and she fortunately holds it well, emoting this progression with verve.

Accurate or not, much is made of a supposed tendency for unfaithful Frenchmen to keep a mistress. Simple Passion inverts the lens to show things from the underrepresented perspective of the other woman whilst casting no judgement on either party. Danielle Arbid keeps parity between the principals during the graphic sex scenes that make up a significant amount of the runtime. Whether there is love between the two is debatable. Perhaps this man represents a lifeboat back to the vibrancy and spontaneity of youth for Hélène. Regardless, Simple Passion does well to capture a transformative period in the lives of both principals.

Simple Passion premiered at the San Sebastian Film Festival, when this piece was originally written. On VoD on Monday, May 31st.