A history professor, a school music director, a children sports coach and a psychology teacher walk into a bar. They’ve decided to test the theory that mankind should maintain a 0.05% blood alcohol concentration in order to maximise their potential and achieve greatness. Two glasses of wine for kick-off and then top it up throughout the day. You already know where this is going but it’s an intoxicating ride through Sazerac-sodden highs before the crashing hangover sets in.

Mads Mikkelsen’s Martin is the central protagonist and his issues are the most developed, with a turgid home life of moody teens and an absent wife on night shifts. He doesn’t get out much and they don’t go on holiday any more. His class literally organises a grassroots parent-teacher conference in complaint at how boring he is. Something has to give. Mikkelsen has the perfect face for this kind of gig – a craggy stoicism that loosens up to freely given grins as the booze takes hold.

The rest of the crew are less recognisable to a non-Scandinavian viewer but more than match the ever-compelling Mikkelsen. Thomas Bo Larsen, Lars Ranthe and Magnus Millang are Tommy, Peter and Nikolaj, respectively. These chaps give strong comic performances that register equally strongly on the pathos scale when required. Hopefully we’ll get to see more of them in future. Group scenes of the gang provide loud, infectious fun but the individual stories of workplace successes and connecting with their young charges give the movie heart. 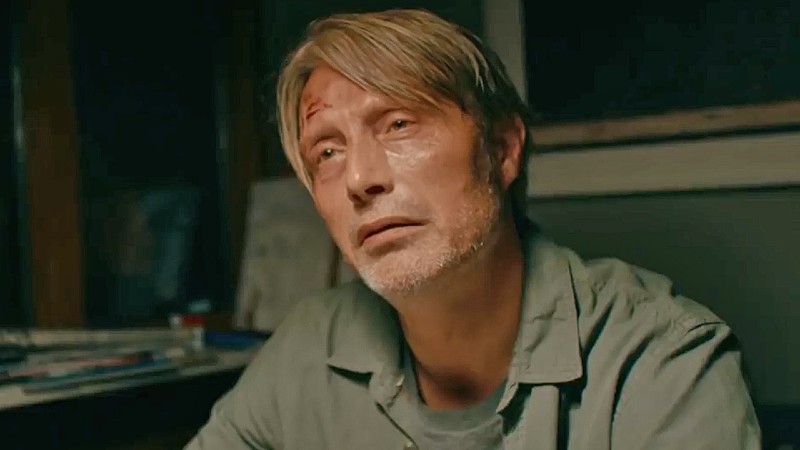 There are early attempts to codify the system, framed as a psycho-sociological experiment. Breathalysers are employed to give a semblance of fine control and ground rules are based on Hemingway’s tenets not to drink after 8pm or on weekends. Again, no prizes for guessing how the film progresses. Whilst the wannabe psychonauts are in it together, it is an inherently selfish and isolating act to surrender to addiction. The burden this places on the families of Martin and Nikolaj soon emerges from the depths of the bottle. Single men Tommy and Peter walk their own paths and the interpersonal differences of addiction susceptibility are explored. It is difficult to ascribe blame for the spiralling outcomes but there is a dark hint that psychology teacher Nikolaj, instigator of the grand experiment, has been on the sauce for a while now and has sought out fellow sinners to drag down with him.

Aside from individual narratives, there is a wider social commentary at play. References abound to the boozing habits of famous historical leaders and the binge drinking of the school kids backgrounds the film. One classmate in his late teens offhandedly confesses to drinking over 40 units a week, 55 if there’s a Champion’s League match. Europe is an acknowledged landmass of drinkers, and this isn’t going to change any time soon. There’s even a possible genetic basis for our preponderance to imbibe compared to other parts of the globe, selected for by the colder climes inhabited by ancient Europeans. As such, Another Round refuses to come down too heavily on either side, neither unreservedly extolling the virtues of booze nor decrying it as the devil like some prohibition-era pamphlet. There is no “Drink Responsibly” tag. However, arguments can be more persuasive when not construed as preaching.

For all that, it’s a film that’s proud to be deeply Danish, punctuated as it is by stirring choral renditions of patriotic songs. It’s a nice opportunity for the uninitiated to have a look into some of their cultural peculiarities, particularly in their schooling. Final exams are verbal affairs opposite your usual teachers? You get a little hat when you pass? What? Vinterberg pulls it all off stylishly, with clean interior shots of the school, beautiful homes and high-end restaurants. However, if that is an accurate representation of the dining culture in a famously expensive country, one shudders to think of the bill. To commit so thoroughly to alcohol in Denmark must costs a mountain of cash as well as your soul.

Another Round premiered at the San Sebastian Film Festival, when this piece was originally written. The four male leads won the Best Actor Prize. The film is part of the BFI London Film Festival in October. In cinemas on Friday, July 2nd. On VoD on Friday, September 24th.

Bored of living with your family in a large empty house? Then invite a bunch of people to move in and turn it into a commune - now available on Mubi [Read More...]