Tekehentahkhwa (Kiawentiio) prefers the nickname Beans to her actual birth name. She is on the cusp of adolescence, and grappling with decision whether to leave the Mohawk reserve in order to further her education. Suddenly, she is engulfed by an armed stand-off between the indigenous people and the neighbouring white communities over land control. The incident, which became known as the Oka crisis, eventually led to the reserve being isolated and vilified. An arduous fight for survival ensued.

Kiawentiio’s performance is the driving force of the movie. In her hands, Beans is a charismatic, educated girl trying to fit in a brutal, violent world. The script, written by Deer and Meredith Vuchnichl, immediately establishes her as someone struggling to stand her ground. The fact that she has to endure a literal siege has a strong symbolism.

Deer’s sensibilities as someone who, like Beans, lived through the Oka crisis in her early adolescence, come alive in powerful scenes and remain one of the biggest takeaways of this feature. The protester’s attack on Beans’s car, for example, is an exercise in dread and brutality. Another moment – Beans’s sudden grasp and enjoyment of expletives – is subtler but no less emotionally impactful. 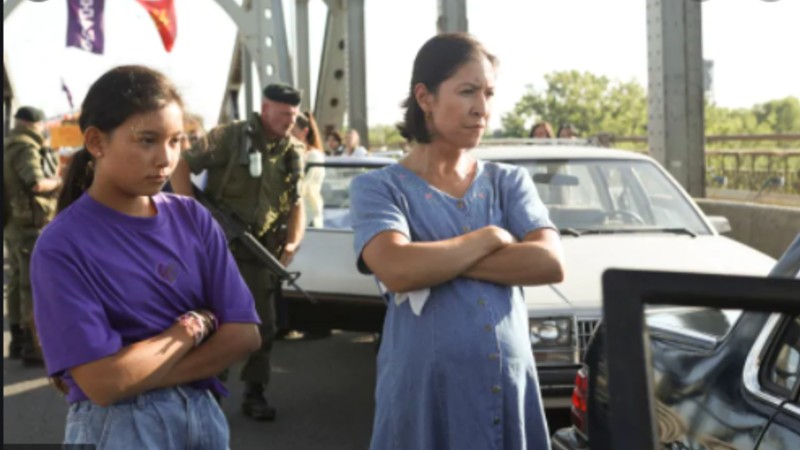 This is a movie which occasionally slips into didactic and formulaic territory. It is centred on the protagonist’s point-of-view, and the the Oka crisis is a mere backdrop. This narrative decision may sacrifice some of the historical depth but allows for a refreshing female perspective to prevail.

Beans’s relationship with rough girl April (Paulina Alexis), born out of a desire to adapt to a hostile environment, is a compelling portrait of female bonding. Her connection with her mother symbolises the struggle between wanting to be embraced and keeping her essence intact. Boys eventually step into the picture. It feels natural and does not affect the film’s Bechdel score.

At one point, April proceeds to beat Beans up in order “to toughen her up”. The physical violence, however, is not the focus of the movie. It is the psychological violence of growing up in an indigenous community facing extinction will hit you like a ton of bricks.

Beans premiered at the Toronto International Film Festival, when this piece was originally written. Out in October in Raindance (in London). A memorable movie, even if it’s not without imperfections.

Our dirty questions to Thirza Cuthand

As the transgressive Indigiqueer filmmaker arrives in London from Canada for the Native Spirit Festival, we took the opportunity to talk about indigenous traditions, transposing, oral storytelling into cinema, humour as a political tool and more! [Read More...]