Czech director Václav Marhoul talks about finding hope in the disturbing cruelty and violence of The Painted Bird, his adaptation of Jerzy Kosinski’s controversial novel – in an exclusive interview.

Václav Marhoul’s adaptation of Jerzy Kosinski’s controversial novel, shot in black and white 35mm, follows the tragic journey of Jewish boy, Joska (Petr Kotlár). Entrusted to the care of an elderly foster mother to save him from persecution, a tragedy leaves the boy alone and vulnerable. He encounters people whose lives have been altered by the violence of the war, who are intent on revisiting this cruelty on the boy.

In conversation with DMovies, Marhoul discussed the presence of hope in his dark and disturbing story, and his ambition to only ask questions.

Paul Risker – Do you see your three films as being connected, or do you believe they should be seen as independent of one another?

Václav Marhoul – Those three films are connected, even though the first is a comedy and the second is a war time drama. The Painted Bird is not a holocaust movie, it’s not a war time drama for me. It’s a more timeless and universal story about human kind.

The character in the film Smart Marlowe is a private detective in Los Angeles at the beginning of the 30s. He’s a lonely cowboy, a lonely guy who is absolutely lost. He’s only trying to survive in the concrete jungle amongst all the corruption, and he has to save his self-respect. It was the same in Tobruk, where the soldier, the young boy is going to war. He thinks that he’s going to be a hero, that he will come back with a lot of medals, and he is going to be honoured, but then finally he’s doing the same – he’s trying to survive and to save and find his self-respect. The penalty he’s going to pay is his death, and The Painted Bird is the same. It’s about self-respect, survival, and the darkness in all of us. Even though a different genre, those three films are still connected by this feeling.

PR – In spite of the disturbing events of the story, there is a presence of hope. Did you want to confront the idea that light and darkness, good and evil are inseparable?

VM – For so many people, Jerzy Kosinski’s book is only a description of the brutality and the violence that people can do to each other. But from the very beginning I saw the many questions and no answers, and I saw the hope.

The three most important things in our lives are: goodness, hope and love. People were saying, “Václav, you must be crazy because this book is not about goodness, hope and love.” But I said, “Yes, it is”, because it’s based on opposites, and the light is in the dark. The reason I saw there was hope is because it’s more important than either love or goodness, which we will never find without hope. In our lives, we’re missing that moment when we realise how important those things are for all of us. 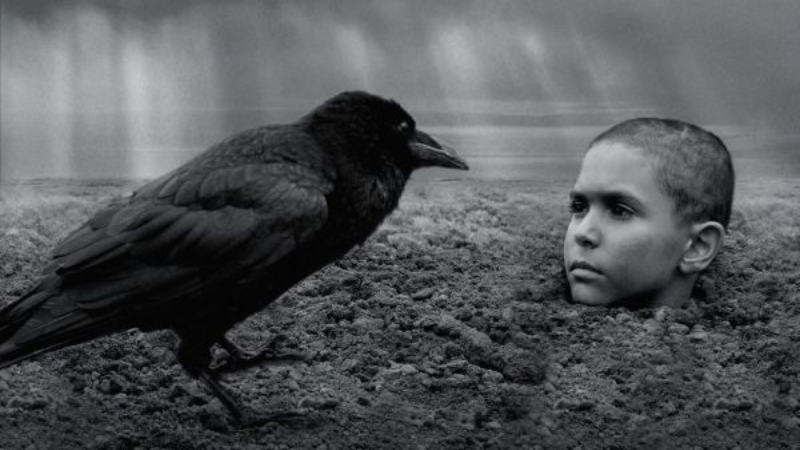 PR – Was your intention to provoke the audience to ask questions in response to the film’s brutality and violence?

VM – A very complicated question for me is how much do we need to have the bad things in our lives? My film only offers the audience questions, but no answers because I don’t have an answer. The most important question is, if we do not meet the bad people then how will know who is good? And if we never find out about those people that could hate us, how will we realise that they can hurt us?

My biggest ambition in this film was to only ask questions, and it’s not telling you what you must feel, what you must think, and that this is my opinion, and you must respect it. It’s very open and for me, it’s a timeless and universal story. It doesn’t matter that the story is set in the Second World War. It could be a science fiction film because it’s about the principles. It could be a western, it could be anything, it doesn’t matter. It’s the principles that are important.

PR – Was the experience of making this film a transformative experience?

VM – A few months ago someone asked me what The Painted Bird brought to me, and I said, “Well, maybe much more than what it stole from me.”

My DOP [Vladimír Smutný] and I were sitting together, we’ve made all my films together, and we always create a storyboard before we shoot. But The Painted Bird was so complicated that we didn’t have any storyboards. Every morning when we woke up, we knew what we had to do, but we didn’t know how we would do it. We were just going in with open minds, and we opened our hearts to our emotions.

It was also fascinating because I shot this film chronologically, and it was wonderful to go step-by-step because right at the beginning I didn’t know what was waiting for me, or what I should expect. It was exciting and surprising for me how more deeply I felt the story day-to-day, and that’s what happened with Vladimír, and that’s what happened with the main character, the young boy played by Petr Kotlár.

It was fascinating to watch how Petr was changing because he understood much more day-to-day. But I have to say that I was surprised what was going on with me, because let’s say to find out the reason for the violence and everything else, it was in fact what I felt before, only just more deeply.

I could shoot chronologically because I had a wonderful producer – me. Normally the producer will tell you, “No, look, it’s too expensive.” Every moment, every day was so challenging for all of us, and I didn’t know what would happen the next day, but it was great.

The Painted Bird is now in select cinemas (UK & Ireland) and on digital.

Vaclav Marhoul's passionate adaptation of Jerzy Kosinski's Holocaust novel is a brutal meditation on the cyclical nature of prejudice and cruelty - in cinemas on Friday, September 11th [Read More...]

What about terrorising the terrorists? Left-wing activists harass and sabotage a far-right group in Germany, but their increasingly violent tactics raise various ethical questions - live from Venice [Read More...]