"Dirty gem"
Older Americans dwelling in their own vehicles travel the country in search of employment, in this poignant real-life drama based on the eponymous book - in cinemas on Monday, May 17th (as cinemas finally reopen)

Fern (Frances McDonald) is a beautiful and intelligent middle-aged woman. She is very unusually charming, with her quiet and stern smile. She is also in perfect good health. Someone who could be working in Wall Street. Instead she lives in poverty in the back of her van (not a camper van, but a regular size one), travelling across her large nation in search of temporary employment in fast-food restaurants, factories and so on. She literally has to “handle her own shit”, in reference to the bucket that she uses as a toilet. The film is based on Nomadland: Surviving America in the Twenty-First Century, a non-fiction work penned three years ago by Jessica Bruder.

The nomadic lifestyle is partially Fern’s own choice. She was forced to leave her beautiful house facing the desert in Empire, Nevada, after the local mining company USG shut down, turning the the community into a literal ghost town. Even the post code was discontinued. Plus her husband Bo passed away. Fern could live with her well-off sister Dolly in a large house. But instead she opted to remain entirely independent and to live a life without roots (unlike the plant after which she’s named).

The nomadic mentors Linda May, Charlene Swankie and Bob Wells (all three played by themselves) become some sort of parental figure to Fern. They provide her with very practical advise about survival (such as car maintenance tips), as well as spiritual guidance and comfort. All three have grappled with death in different ways, and found healing in the unconventional lifestyle. Bob created the nomadic community as an opportunity for older Americans let down by the system, and also as a way of coping with his son’s suicide five years earlier. The avuncular septuagenarian Linda is seeking a new purpose after contemplating suicide. She dreams of moving to Arizona, and invites Fern to join her. Swanky’s cancer has metastasised into her brain and she’s only been given eight months to live. She wishes to spend her final days on the road, and not on a hospital bed. 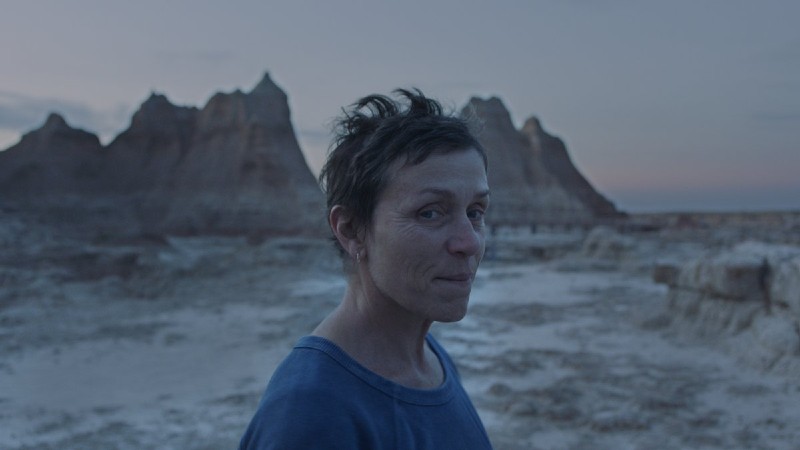 Fern also befriends David (played by the actor David Strathairn), a grey-haired heartthrob with a kind smile permanently attached to his face. They develop a very tender relationship. David is smitten with the charming lady, but it’s never clear whether she reciprocates his feelings. He eventually settles under a roof with his son, daughter-in-law and grandchild. Fern visits them. David asks her to move in. She turns down the invitation, just like she did with her sister.

McDormand is absolutely astounding, her eyes brimming with both pain and the desire to move on. You’d be forgiven for assuming that she was one of the real nomads, just live Linda, Bob and Swankie.

This is palpably real cinema. You can touch and feel the characters. It is also an indictment of the US, and how the richest country in the world has failed very capable people. These nomads are not dysfunctional people. They are perfectly functional Americans who embarked on a very romantic and yet harsh journey due to the lack of financial opportunities. Dolly compares them to the American pioneers. The comparison holds in more ways than one: they are independent, courageous trailblazers braving a nation of continental dimensions in search of pastures green.

Nomadland premiered at the 77th Venice International Film Festival, when this piece was originally written. It was the last film in Competition to be presented, and it received a very warm ovation. It’s not unusual for festivals to save the best for last. It won the Golden Lion for Best Film. It premiered in the UK in October as part of the BFI London Film Festival. In cinemas on Monday, May 17th (as cinemas finally reopen)!

DMovies' editor Victor Fraga has huge reservations about the "woman of colour" accolade bestowed upon Chloe Zhao, and argues that it's detrimental to diversity in film [Read More...]

Songs my Brothers Taught Me

While not in the same league as Nomadland, Chloe Zhao's debut holds its own merit and reflects the director's distinctive sensibility - on Mubi on Friday, April 9th [Read More...]