Mustafa (Ali Suliman) and his wife Salwa (Lama Zreik) live 200 meters apart in villages separated by the West Bank Wall. When he receives a call from his wife saying his son has been rushed to hospital, he’s denied access at the Israeli checkpoint on a technicality. Leaving him with no choice, he pays a driver to smuggle him to the other side of the wall. Mustafa alongside a small group of strangers come to depend on one another, as they undertake the dangerous 200 kilometre odyssey.

What lies behind any story? Is it made to scratch a creative itch? Is it made because it’s someone’s profession? Or is it made with a deeper sense of urgency? The personal bond between a film and its filmmaker is not always known. It’s difficult to view Ameen Nayfeh’s first feature 200 Meters (2020), a journey narrative about the restrictions on freedom of movement, as a filmmaker impulsively scratching at a creative itch. There is of course an impulse to tell this story, but it’s likely motivated by a deeper need.

The filmmaker’s intent defines the film as the antithesis of cinema as the auteur’s medium. For most of us on the outside of the Palestinian-Israeli tensions, only when we read the words of the director that we will understand the weight of this juxtaposition. What we experience is the author’s vision as a prism for many voices. In Nayfeh‘s words, “200 Meters is my story and the story of thousands of Palestinians… I believe in the power of the cinema and how it touches our lives in magical ways. I need to tell this story.”

Walls are powerful symbols in human culture, and while they can be seen as an antagonistic enemy in and of themselves, through the contempt that they provoke, they are concrete expressions of human provocation. The West Bank Wall is a symbol of Israeli oppressive resolve that has provoked condemnation from the international community, with the International Court of Justice ruling Israel of being in breach of international law in July of 2004.

Nayfeh effectively uses shots of the wall sparingly, and in the early part of the film he frames the real barrier as the soldiers, the wall only an infrastructural tool. Then towards the end of the film, when the camera lingers on the formidable towering structure, we realise that it’s treated as a verbal or mostly unseen antagonist. The danger is in being smuggled undetected and the soldiers at the checkpoints. 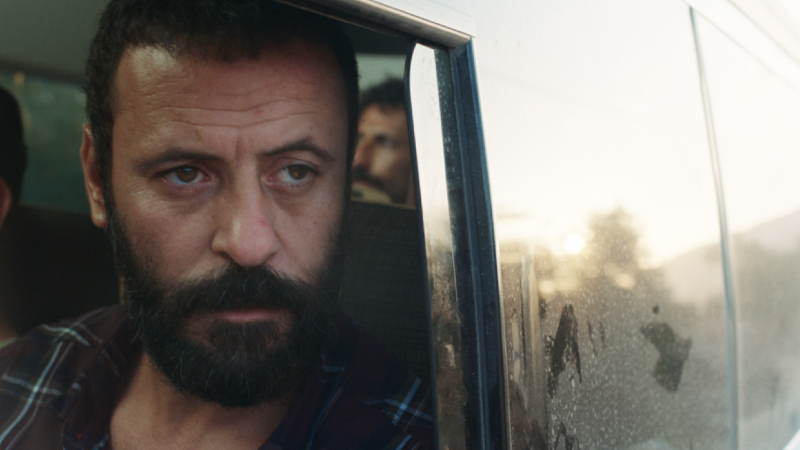 The wall is not only a physical scar on the landscape, but a human one. It is a metaphor for divisions that run deep between human beings, between the empowered and the powerless. Nayfeh’s primary focus on Mustafa and the small group undertaking this odyssey, their interpersonal dynamics and evolving relationships, gives this shot of the wall late in the film a resonance, as it reiterates the human heart beat of the story. In Palestinian and Israeli tensions, concrete and fencing is a festering injury that continues to divide families, and makes everyday living and working difficult.

In this bleak reality the only answer is to manage an impossible situation, an idea the ensemble cast of characters compliment, while suggesting that frustration and anger of the situation is one shared by both Palestinians and Israelis. There are not necessarily beats of optimism, but Nayfeh does feature sensitive and touching moments of the simple ways in which Mustafa finds to connect with his family across the 200 meter divide, and in adversity, there is a surprising camaraderie discovered.

200 Meters presents us with a quandary, in that the emphasis is on an experience that cannot be critiqued by some rudimentary criteria. Yes, the film is a technically proficient and well executed piece of filmmaking, but it’s more than that. You have to get in the minivan and go on the journey, and spend time with the characters to see their relationships evolve.

Nayfeh’s film is to be critically praised, but any critique is limited, much in the same way as the limitations in critiquing a piece of music. I recall reading someone, I forget who, assert that you cannot explain why you love a piece of music. The appreciation lies in the feelings provoked and 200 Meters is a film that provokes thoughts and feelings that each one of us will experience, and that we cannot express through words.

This is an example of the power of storytelling to take us beyond text, creating intimate connections with characters that feel to us as real as anyone we might meet in our everyday lives. We deep-dive into the stories of thousands of people in just 95 minutes, and surely, if this is not magical, then it’s truly special.

200 Meters showed in Competition at the 77th Venice Film Festival, when this piece was originally written.