Zenia (played by British Ukrainian actor Alec Utgoff) heals the pains and afflictions of the bored and sick Polish bourgeoisie. He lives in a small flat in town, and spends most of his time – massage-bed under his arm – on an upper class district, visiting very different clients. A woman struggles with an unsatisfactory sex life and an unruly daughter. A man is dying of cancer. An old lady is very sad and lonely, in the company of her three bulldogs. And so on. The young and attractive foreigner is a masseur, a healer, a hypnotherapist, a dancer, a friend and a lover, sometimes all at once.

Never Gonna Snow Again is a highly elliptical film. It’s a collection of allegories, some perfectly intelligible, some deeply personal and moot to interpretation. There is a apparent reference to last sequence of Tarkovsky’s Stalker (1979), as a young Zenya uses telekinesis in order to move a glass across the table. Some sequences feel very creepy/ Lynchian, such as an exotic peep show dance (watched by Zenya) and a magic trick on stage (inexplicably performed by Zenya alongside one of his clients). All strangely delectable.

A number of languages are spoken in the movie, including Polish, Russian and French. The movie titles pops up in the middle of the film in Vietnamese. Zenya speaks all languages in the world, we are told. Naturally his preference is his mother tongue Russian. He roots for Shakhtar Donestk, the football team of Russian region of the Ukraine. He comes from Prypiat, the ghost city in Northern Ukraine, next to Chernobyl. We are told that’s where he was born exactly seven years after the largest nuclear accident in history. Which is impossible, since the city was uninhabited then. But this isn’t the only wilfully preposterous statement in the movie. We are told that it will never snow again in Europe beyond 2025 without any explanation whatsoever. 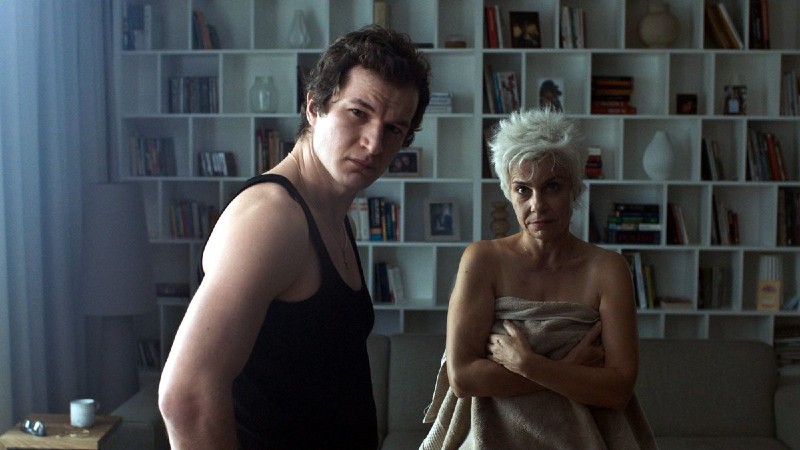 Presumably, Zenya’s supernatural powers are related to his radioactive origins. Parallels between snow and dust are drawn. Dust is one of the most radioactive elements (and the reason why people are required to wear masks when visiting radioactive zones). Perhaps snow is radioactive. Or maybe not. Perhaps this is a film about the collapse of Europe. Or maybe not. Perhaps it’s about the fear of invisible, our symbiotic relation with foreigners, our strange relation with the East, or something . Interpret it as you like. Never Gonna Snow Again is the type of film that will keep you awake at night trying to put the puzzle pieces together.

The cinematography is also memorable. Eerie urban landscapes are blended with dark forests. The upper class district where Zenya’s clients live is straight out of a horror or a sci-fi movie: an entire neighbourhood made of barren, soulless, near-identical, enormous, American colonial style mansions.

Overall, a hypnotic and transfixing experience. Sexy and creepy in equal measure. Just like its protagonist.

Never Gonna Snow Again showed in Competition at the 77th Venice International Film Festival, when this piece was originally written. It has been selected as Poland’s Oscar submission. It premieres in the UK in October, at the BFI London Film Festival. In cinemas on Friday, October 15th (2021). On Mubi on February 3rd (2022).