"Greasy movie"
A government officer is split between her maternal feelings and her allegiance to the communist regime during the little-known Novocherkassk massacre of 1962 - on VoD on Monday, March 15th

Lyudmila (Julia Vysotskaya) is a tall, blonde, beautiful and elegant government officer. Some Soviet version of Cate Blanchett. She works for the Regional Committee of Novocherkassk, a medium-sized Russian town not far from the Ukrainian border. She lives with her 18-year-old daughter Svetlana and her elderly father. She is very happy at her job and her commitment to the regime is unflinching. But no everyone feels the same ways.

There is discontentment in town as food prices rise and wages shrink. Lyudmila misses Stalin, who ruled with an iron fist. Khrushchev’s more lenient rule has apparently led to some sort of democratisation. Now the unthinkable is about to happen: factory workers going on strike demanding better salaries and working conditions. Striking is a gesture of resistance against capitalism, and therefore profoundly subversive when held against a communist regime.

Svetlana wishes to join the workers, and she proudly boasts her constitutional rights. Her mother becomes infuriated at the thought of her daughter joining the “hooligans” and “instigators”. There is a clear generational divide, as the young people who hardly remember the Stalin years are far more sympathetic towards personal freedoms. 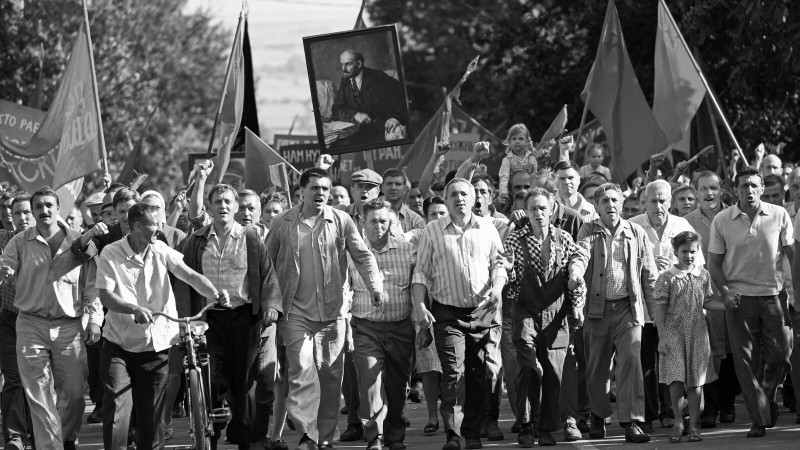 On June 2nd, strikers and sympathisers – including Svetlana – held peaceful protests in the town centre. The Committee was surrounded and Lyudmila had to flee through the back of the building. The army and the KGB were called in. Suddenly, the shots were heard and dead bodies laid across the main square. The town was sealed and officers made to swear secrecy. New asphalt was immediately laid on the square in order to conceal the blood stains. Nobody was allowed to know that the regime had fatally shot down their very own people. Surviving protesters hid in fear of prosecution.

Lyudmila – who had earlier called for the drastic measures against the “hooligans”- is now desperate to find her daughter. She searches hospitals and neighbours in vain. Could Svetlana be one of the casualties? The mother sets herself on mission to find out what happened, but the obstacles she encounters on her path to the truth are both numerous and insurmountable. Perhaps more significantly, she has to battle with her own allegiance. Singing patriotic hymns is often her only comfort

The Novocherkassk massacre came to epitomise a country divided between authoritarianism and democracy, and Lyudmilla embodies this duality better than anyone else. Lyudmilla is not evil, perhaps she is just naive. Or maybe she just didn’t have a choice: “what am I to believe if not communism?, she puts it succinctly.

Andrei Konchalovsky works well as personal drama, focused on one family. It does not bode well as a historical register. There are no figures and no contextualisation. Plus the strike and protest scenes look staged, lacking vim and enthusiasm. This is not Eisenstein’s Strike (1925).

Dear Comrades! is showing in Competition at the 77th Venice International Film Festival. The director won the Silver Lion four years ago for his previous feature Paradise. This isn’t the only film at the Festival about a mother grappling with a historical massacre.

On Curzon Home Cinema on Friday, January 15th. On other platforms on Monday, March 15th.

Based on the memoirs of a war-veteran-turned-spy, Russian film paints a graphic, vivid and harrowing portrait of the War in Afghanistan - from the Russian Film Festival [Read More...]

Canteen worker of a secret Soviet research institute wrestles (both literally and metaphorically) with her coworkers, in this highly claustrophobic, violent and sexually graphic Russian flick - live from the Berlinaler [Read More...]