The World to Come

"Filthy genius movie"
Period Lesbian drama set in the US and filmed in Transylvania is exuberant in its photography, supported by a simple yet powerful script - now on all major VoD platforms

This is a transatlantic endeavour in many ways. Directed by Norwegian actress-writer-filmmaker Mona Fastvold (this is only her second feature), filmed in Romania, starred by two British actress and premiered at the Venice Biennale, the film movie is in reality entirely set on the other side of the Ocean, in the US. It is based on a short story by American novelist Jim Shepard, who also co-wrote the script with another American novelist, Ron Hansen.

Abigail (Katherine Waterston) lives with her quiet and dispassionate husband Dyer (Casey Affleck) in rural Onondaga (in the state of New York) in the year of 1856. They lost their five-year-old child Nelly to diphtheria a year earlier, and have since struggled to reconnect. Abigail constantly refuses Dyer’s sexual advances and wishes for a new child. She now finds pleasure in writing and educating herself (she wishes to purchase an atlas of the US).

Tall and blonde Tally (Vanessa Kirby) moves in next door with her cruel and demeaning husband Finney (Christopher Abbott). The two women soon bond and a full-on romantic and sexual relationship flourishes, lending an entirely new dimension to their mostly uneventful and miserable lives. 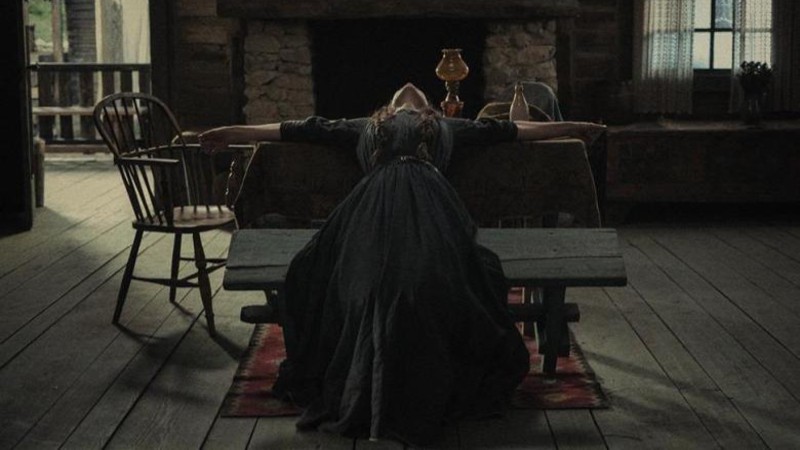 At first, no one suspects the romance. The two husbands could hardly conceive such relationship. Gradually, however, they begin to realise that the affinity between their wives is more than a mere affection. Finney becomes increasingly aggressive and menacing. He reminds his wife that a husband has full sway over his spouse. He constantly sends not-so-subtle signs of his intentions, telling Tally of the numerous men who killed their wives and proudly boasting in front of his neighbours that he once held a dog in the snow until it froze to death, as a punishment for his incessant barking. He leaves little doubt he could do the same to Tally.

While the plot sounds trivial and predictable, The World to Come is no ordinary movie. It was filmed in celluloid in just 24 days in two separate stints in order to capture the different seasons of the year. The outcome is splendid: winter is painted with abundant light and snow, and gentle blue hues, while spring and summer use a broader colour palette, often blurry and overexposed. These devices lend the movie a dreamlike sensation, a little bit like a Jan van Goyen painting.

The lines are also complex and delicate. The joint effort of two novelists paid off. It is also worthwhile mentioning that Fastvold herself is a writer, and I would hazard a guess that she engaged thoroughly with the two American males. The language is straightforward yet tasteful and elegant. Waterston’s delivery (she narrates most of the film, diary-style) is unhurried, measured and yet heartfelt. The movie wraps up with a reminder of the power of imagination, in a tribute to both cinema and literature. It is both possible and satisfactory to live inside the house of your dreams, even if it’s are confined to the realms of the mind. Or written in a book. Or printed on celluloid.

The World to Come showed in Competition at the 77th Venice International Film Festival, when this piece was originally written. It’s in cinemas on Friday, July 23rd. On all major VoD platforms on March 3rd (2022).