"Greasy movie"
Crime thriller has strong performances and a dash of cinéma vérité, yet it does not transcend its derivations of character and narrative - on VoD on Monday, September 7th

The main criticism of this film has been that it is derivative – a knock -off Training Day (Antoine Fuqua, 2001). This issue is compounded in the UK market by the decision to rename it Bulletproof, a meaningless non-title. In the rest of the world it is known as Crown Vic, a reference to the V8-powered Ford Crown Victoria that carried police officers for some twenty years.

The Crown Vic, or ‘black and white’, is an almost holy place to Officer Ray Mandel (Thomas Jane), a mustachioed hardhat assigned to break in rookie Nick Holland (Luke Kleintank), “There’s a world inside this squad car, and then there’s everything else outside of it”. However, despite appearances and a few stern moments as they load up for duty, Ray proves to be reasonable – firm but fair. The men share their stories and philosophies of the job as they patrol their area, building a quiet rapport that’s familiar yet credible.

Within 10 minutes of their beat, a foreign object strikes the Crown Vic, sending Nick on foot to apprehend the petty criminal bolting down the street. This is followed by a night of events – drink driving, robbery, car fire, domestic squabbles ­– that bring excitement, suspense, and even levity. 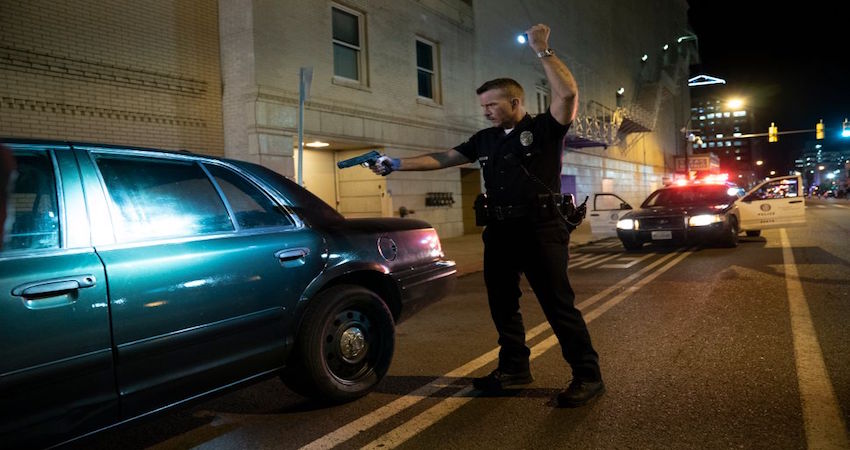 There is a touch of cinéma vérité to how the film unravels. Large portions are without narrative; we simply observe Ray and Nick on the job, meeting a cross-section of society often at their worst. This docudrama aesthetic, combined with Thomas Scott Stanton’s photography of a tenebrous Los Angeles, gives a strong sense of time and place. You feel absorbed in the officers’ job and almost need your own Styrofoam cup of coffee to keep up with their nocturnal prowl.

The danger of the men’s beat is foreshadowed by the film’s opening, which sees a pair of heavily armed bank robbers blast their way through police in a style reminiscent of the North Hollywood shootout. The robbers remain at large and are described by Ray as ‘deadstick men’, hardened criminals who will not hesitate to kill. Their reappearance, it seems, is just a matter of time.

The explosive opener is brief but punchy, bringing to mind Reservoir Dogs (Quentin Tarantino, 1992) and Heat (Michael Mann, 1995).But that is the problem with Bulletproof – it is shackled by its influences. We have seen the rookie cop and the roguish veteran countless times and we know all the moral quandaries that come with them. Yet the realism and strong performances go some way to skirting its triteness. Jane, perfectly cast, assumes his role with just the right cantankerousness, while Kleintank is suitably earnest and straight-laced; they’re both grounded, believable performances. There’s solid supporting work, especially from Josh Hopkins in the role of Jack Van Zandt, an obnoxious plainclothes officer wired on steroids, women and wanton violence. He’s just another misfit in the shadowy wasteland of Ray and Nick’s overnight patrol.

Alas, the fluid pace of our protagonists’ beat is interrupted by a side story involving Ray’s druggy former lover and her abducted child. It is a distraction that breaks with its docudrama energy and sees Ray behave with improbable corruption in the company of a rookie partner he neither knows nor trusts.

Critics may be lukewarm or even outright negative about Bulletproof, but I suspect its competent, nuts-and-bolts quality will earn Joel Souza’s debut a healthy following.