The Bay of Silence

Based on the eponymous book by English novelist Lisa St Aubin de Terán and directed by Dutch filmmaker Paula van der Oest, The Bay of Silence tells the story of a mother suspected of killing her own son, in a complex and multilayered narrative.

Olga Kurylenko exposes a woman caught in the stultifying effects of a postnatal malaise. Whole scenes, set pieces and silhouettes are dedicated to depicting Rosalind’s descent to certain madness, capturing her own literal description of a woman on the verge of a nervous breakdown. Pillared between the advice of her father (a garrulous Brian Cox), and her husband (an excellent Claes Bang), she escapes with what she believes is one from a set of twins. She flees from England to France, where the nightmares continue. The blame of a near fatal fall – a fall she’s convinced killed her unborn child – drives her from the precipice of certain madness, into the arms of complete insanity.

As haunting as the genre it echoes, The Bay of Silence prescribes to the crime thriller genre, capturing the spectral beauties that wanders every frame. More than that, it’s the tale of a fractured mother, embracing the demons that have put her on this metaphorical and literal cliff. Locating his sickly wife in the Normandy locales, Will (Bang) turns to his stepdaughters for guidance, assurance and information. They speak only in riddles, rhymes and silly noises, calling on their ‘daddy’ to solve this insoluble puzzle. 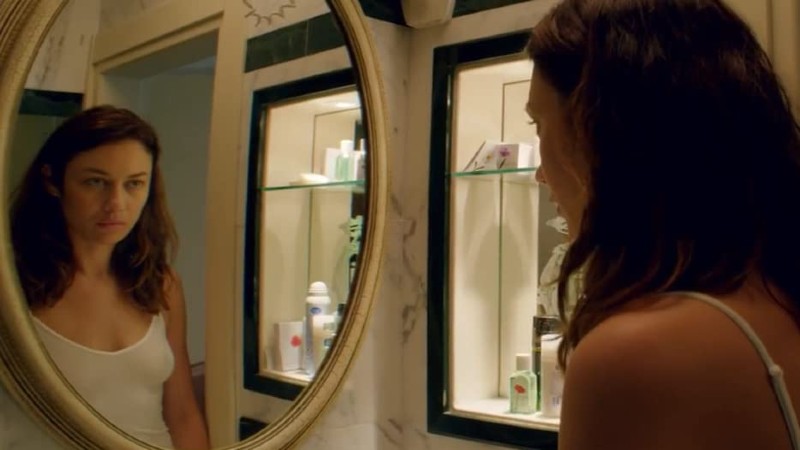 Kurylenko, riding on an artistic high, is superb, characterising a woman captured by the whims, wills and wants of the many men in her life. Boarding on transport back to England, Rosalind falls into the arms of a handsome Frenchman, thanking him for the foresight he’s offered her. The less guarded Will shoos her away, whisking her back to the safeties England offers her citizens. And yet away from the banks that won Britain the WW2, Rosalind and Will find themselves trenched in their own pit of despondency.

The female gaze is conspicuous. Opening on Rosalind (wading inside the water that carries her louche, light body), the film shows a woman raging against the varying rushing tides. Dying to understand where her husband has hidden himself, the panic settles around her unsettled body. The despair emanates from the inside out. Her smile, chirpily poised at the man who delivers her son, disappears from the onset, seldom to return. And it brings viewers into a character study, painting a woman denied the happiness she so ecstatically hoped pregnancy would offer. Crime thrillers do not come finer than The Bay of Silence, yet this is a more romantic vignette, placing greater import on the horrors within us than the dangers outside.

The Bay of Silence is out on DVD and Digital on Monday, September 28th.