He’s done it again. Yes, he’s playing with time and audience expectations. Yes, the action is kinetic and absorbing. Yes, Michael Caine is in it and women barely are. Despite conforming to his well-trodden formula in parts, a bonkers science fiction conceit and engaging performances lead to a convincing result.

Foremost, the action set pieces are something to behold. These are your big ticket items to get the punters through the door and they are visually stunning from the get-go, tending increasingly ostentatious as the runtime wears on. Indeed, some of the more sprawling sequences can be a little hard to follow but there is nothing to criticise about the individual components in these magnetic dioramas. The sci-fi element is key to the fun and without giving any of the mechanics away, Nolan really shows off how the laws of physics themselves are an undeniable element of his director’s toolkit. Here we see the culmination of cinema magic first seeded in the wonky worlds of his earlier movies Inception (2010) and Interstellar (2014). The feats committed to screen are at turns beguiling, jaw-dropping and sometimes a little frustrating to wrap your head around.

The same is true of the overarching plot. The whole film is strung along by a capably deafening soundtrack but unfortunately the bombastic sound design means that essential explanatory dialogue is occasionally lost and the film doesn’t take a single breath for viewers to catch up. Even with the addition of subtitles, I lost some nuances of just why particular events were happening. Despite the lack of clarity, it’s a lot more interesting than the pseudocomplexity of Interception. Just don’t think about it too hard, as the characters themselves take pains to point out. Sure, some overwrought nerds will doubtless emerge with an axe to grind but treat it as knowingly dumb and walk away all the more satisfied. 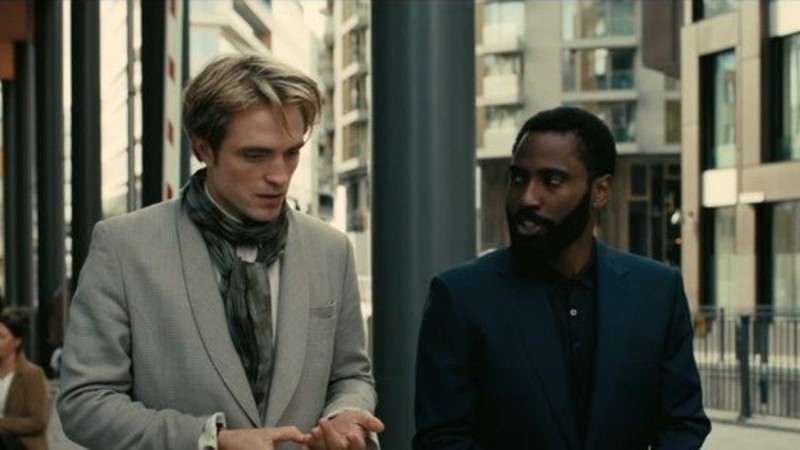 Lead roles are a little light on substance, but who really needs things like ‘motivation’ and ‘character development’ when there is such a bounty of rich action to be had. John David Washington is clearly having a lot of fun but never strays too far from badass mode. Helped along by the globe-spanning storyline, Bond is the obvious comparison and a property that has been flirtatiously associated with Nolan for years. Fortunately, Tenet plays more to Craig than Connery but whilst the weight of the lead is admirably shouldered by Washington, it is Robert Pattinson who steals scenes effortlessly. All suave competence with a touch of enigma, Pattinson has recently excelled at genre performances with Good Time (Safdie Brothers, 2017), High Life (Claire Denis, 2019) and The Lighthouse (Robert Eggers, 2019), positioning himself as an actor who can do anything. Tenet provides the most directly big-budget action role for him yet, a dry run ahead of his upcoming turn as Bruce Wayne. Nolan here ensures a successful passing of the Batman custodianship. No-one talks about Affleck.

Elsewise, the actor behind the central antagonist is near unrecognisable, name withheld so that readers can also experience moments of “Is that…? Surely not. But it must be…”. Whilst this turn is pleasantly surprising, the brief appearance of Sir Michael Caine comes across as needlessly gratuitous this time around. Whilst some Nolan darlings are bearing ever-fresher fruit, it’s past time to kill others and women are again underserved here. Elizabeth Debicki merits her share of the screen time but is given very little to work with aside from keywords like “doting mother”, “unhappy marriage” and “tenacious”. She is introduced with a background in art appraisal and certification but this quickly falls by the wayside in service to the bigger picture. Other female characters are functional, delivering exposition in their brief windows on-screen before it’s back to the boys. Maybe next time, eh. A slew of minor mercenary figures also rise and fall as the characters traverse country to country, their availability explained away by the intelligence service background of the main characters. Again, don’t think about it too much.

All that to say Tenet is well worth your time and money in a summer light on new releases. However, the film is firmly located at the opposite end of the spectrum to offerings from Statham, Cruise and The Rock, demanding a little savvy from the audience. A few threads are even left open to chew over at home and, from another studio, one could expect further installments. In this era of constant franchising, it is gratifying to instead be allowed the space to reflect.

Tenet is in cinemas everywhere on Wednesday, August 26th. On VoD on Friday, January 4th