"Dirty gem"
Impressive debut presents a snapshot into the world of Paris' marginalised immigrant communities and how those of foreign descent are only embraced when they’re scoring goals - on VoD on Monday, December 7th

France has roundly thrashed Croatia in the 2018 World Cup final and the streets are thronging with celebration. Young Issa (Issa Perica) and his mates have bussed into the centre in order to share in the glory of their countrymen and inspiring hero Mbappé, dark faces shining brightly in a sea of Caucasians. Flash forward and it is difficult to reconcile this innocent joy with the damaged being at the end, wounded by police heavy-handedness in an apathetic, uncaring state.

Morning dawns on the heavily immigrant Les Bosquets housing estate of the Montfermeil district and residual passions linger from the victory, compounded by 30-plus degree heat. Into this pressurised environment, Brigadier Stéphane Ruiz (Damien Bonnard) has his first day on the job after transferring from a presumably cushy countryside posting. He is placed with the affable, local-born Gwada (Djebril Zonga) and obnoxious dickhead Chris (Alexis Manenti), tasked with keeping the neighbourhood in line. They navigate a demimonde of interfactional influences – social and criminal groups that fill the authority void left by an absence of any positive government. The local ‘Mayor’ (Steve Tientcheu) holds sway over the streets, presumably with charge over the prostitution and drugs that are presented as major issues in the area but never depicted on screen. The Muslim Brotherhood is also in force, attending to the physical appetites of the local kids as a means to try and feed their spiritual. The kids themselves are a force to be reckoned with by numbers alone, Issa and his brethren eking their fun out of the tenements’ rubble. Chris’ unit patrols, poking fun with residents one moment, cajoling and threatening the next. They demand fear disguised as respect.

Beyond a shared setting, the association of the film to the eponymous novel is not immediately apparent. There is no trite, synthetic naming of characters to match. Instead, the dispossessed youths are cast as the current generation of revolutionaries, taking inspiration from the Parisian riots of 2005 in which Montfermeil, Clichy-sous-Bois and other nearby suburbs took to the streets with violence. Makeshift barricades and all. A nod to the infamous musical adaptation also feels present, with a theatrical element delivered by the introduction of a travelling circus. Transgression against these hardened roadmen serve as a match with which to ignite the current Parisian powder keg.

Morality in les Bosquets is a spectrum of grey and the messages from above are mixed. Ruiz is warned by his new commissioner that anti-social behaviour will not be tolerated, seconds after some light sexual harassment in the precinct on her part. Chris himself is not averse to leaning on the shadier individuals to help him in matters and his volatile disposition is a major source of escalation within the film. As the plot wears on, his short-term cowboyism proves increasingly insufficient to enact long-term solutions and their control of the situation is worn and eroded. There are timely parallels to the situation of police brutality in the US and the new prevalence of body camera footage. Numerous locals are introduced as having reformed in prison and Ly himself served time at the turn of 2010 for violence against his sibling and her partner. Accordingly, strong metaphors of caged animals pushed to the brink are present. On principle, unsubtle metaphors are not bad things. However, some literal expressions of this metaphor are tonally a bit out of place. 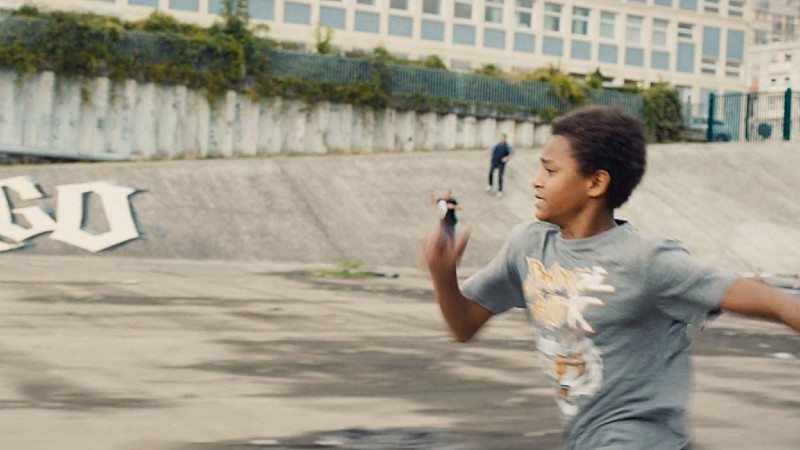 An engaging plot carries the film along and tensions are constantly elevated by the high-intensity interactions between the police and their charges – interactions that are caught up close on camera for a claustrophobic feel. Contrasting aerial shots show the full nature of the district; crowded housing blocks and markets in opposition to the picturebook central Paris of popular culture. The film could be considered an antidote to ‘Paris syndrome’, the visceral culture shock experienced by tourists, particularly the Japanese, upon arriving for their holidays and finding a city greatly at odds to their expectations. Hallucination, anxiety and vomiting can follow. Screening of Les Misérables alongside Amélie (Jean-Pierre Jeunet, 2001) and Before Sunset (Richard Linklater, 2004) could help eradicate this phenomenon and actor performances here are as good as any other film set in the city. Nuanced, believable and human, with hard-faced posturing giving way to vulnerability throughout. A short montage that passes over quiet moments for all of the film’s principals also furthers the sense of humanity surviving in the face of hardship, bent but not broken.

This is one of the true takeaway messages here, alongside the warning that cities discount these communities at their peril. Newer immigrant communities are ostensibly accepted but still kept at bay with fewer opportunities and cultural distrust. Time has worn the path to acceptance for, say, immigrants to Britain from China and the Indian subcontinent. However, in this accelerated world of partisan news, climate change and drone strikes, mass immigration is one of few constants and time alone may no longer suffice to bring new waves of huddle masses into the fold. Films like Les Misérables can help bridge empathy to these worlds – here, without sacrificing entertainment value. Look forward to Ladj Ly telling more tales of life in the margins of Paris.

Les Misérables is in cinemas everywhere from Friday, September 4th. On VoD on Monday, December 7th.