"Dirty gem"
This gritty, powerful take of a fractured family has echoes of Andrea Arnold's FISH TANK, and is guaranteed to enrapture audiences in Britain and beyond - out on Friday, August 7th

Director Eva Riley examines the idea of family in a perfectly pitched British drama, which can be positively compared to Andrea Arnold’s Fish Tank (2009). Frankie Box stares right into your soul as Leigh, a young girl feeling lost after the death of her mother, and absence of her father (William Ash) who now lives with a new partner in another house.

Her one solace is her gymnastics club. In the build up to the big competition, Leigh can’t seem to get her routine right, with the pressures of the outside world piercing what was once a protective bubble. Then, through her door walks Joe (Alfie Deegan), the half-brother she never knew she had. Forced to live together, his cocky abrasive nature initially repels her, but the two lonely kids soon form a connection, drawing Leigh into his dangerous world.

So much of Riley’s impressive debut relies on what is unsaid, and using every element on screen. We don’t hear a detailed explanation of how Leigh feels, but we see her eyes nervously dart around as the music starts, we hear the chatter of mums at in the viewing gallery, the giggles of her clubmates, all dressed in more expensive gear. Riley creates an environment that requires no audible explanation. 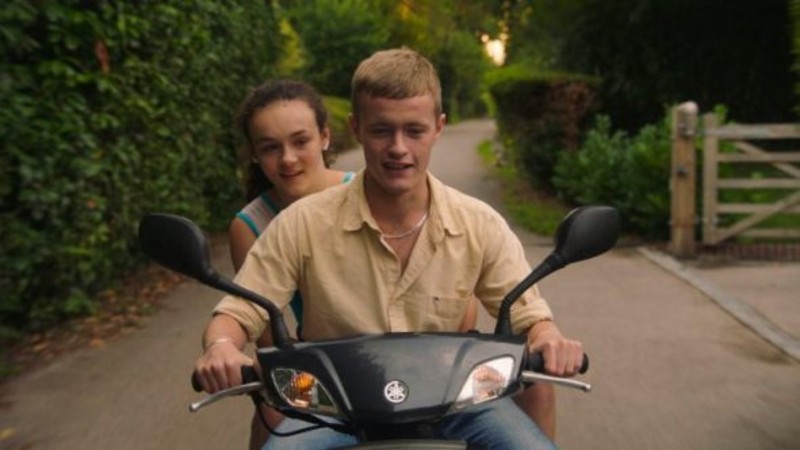 However, we’re not here to examine gymnastics. The main theme is love, or the absence of it in every character we meet. Leigh and Joe are abandoned in their own ways, and unsure what they’ve done to deserve it. Both have formed hard shells that immediately crumble when their father shows the slightest bit of attention, before spiralling into self loathing once he leaves. It’s heart-breaking to watch, and hard to judge either too harshly when Leigh starts to help Joe steal bikes for intimidating boss Reece (Billy Mogford).

This empathy also helps progress a subtle but always present sub-plot, where Leigh’s affection for this new family member becomes blurred. Told in stares and run-off sentences, handled differently it may have been shocking, but in this world it is a symptom of forgotten children who have suddenly found each other. Life and emotions are messy, particularly for a grieving teenager.

Young lead Box is exceptional. There’s no hint of drama school stageyness in her performance, helped along by natural dialogue. Recording every moment in her wide-eyed stares and lost expression, she’s well met by Deegan. A young man who chases after affection like a puppy, his bouncy charisma works when put next to his shy co-star. While the focus is on them, there’s able support in smaller roles such as Leigh’s coach, played by Sharlene Whyte. Delicately played, she wants to nurture her student but is unable to get too emotionally involved, instead helping by turning a blind eye to missed fees and lateness.

Perfect 10 explores gritty, uncomfortable questions with a light hand, showing the people rather the predicament. It’s a great example of what happens when different voices are heard, behind and in front of the camera. It is out on BFI Player and Curzon Home Cinema on Friday, August 7th.