The Algerian Civil War of the 1990s is the setting for director Mounia Meddour’s semi-autobiographical drama. In the capital city Algiers, as tensions grow between the armed police and anti-government guerillas, fashion student Nedjma (Lyna Khoudri), known as Papicha to her friends, plans to hold a fashion show at her university campus. It’s a confrontational challenge to the fundamentalists who want women to hide their bodies that will have lasting implications on the lives of this group of determined young women.

The drama opens by introducing Papicha and Wasilla (Shirine Boutella) as young rebels sneaking out of the university grounds. When their taxi is stopped at a check point, the firearms and the commanding authoritarian voices of the men dismisses any romanticisation of youthful rebellion as the eyes of the two girls convey their fear. While the terrifying ordeal is brief, it will be one of many, and soon the pair are selling dresses they’ve made in the toilets of the nightclubs. This back and forth shift sets the tone for the film, which is a duel between youthful dreams in a violent and oppressive world, where they cannot be separated.

Words are important in Meddour’s drama, and the passion and conviction of Papicha in particular is infectious. We feel her anger and frustration in as much as we reasonably can, having no personal familiarity with such experiences as her own. There are many fiery exchanges where she expresses herself, whether to her friends, or even getting into a heated argument with Wasilla’s patriarchal leaning boyfriend. Yet it feels that the film picks its moments to make statements and to preach against oppression. These verbal protestations are measured to take an emotional portrait of the struggle with repression and adversity, and instil it with ideas.

In one scene Papicha says of the fundamentalist women who invade their rooms on campus, “They’re ignorant people. They abuse religion.” We share her anger, and what the filmmaker does is portrays the inclusive reality of Papicha’s strength and powerlessness, which is truthful to the realities of these hostile experiences when struggling with indifference. 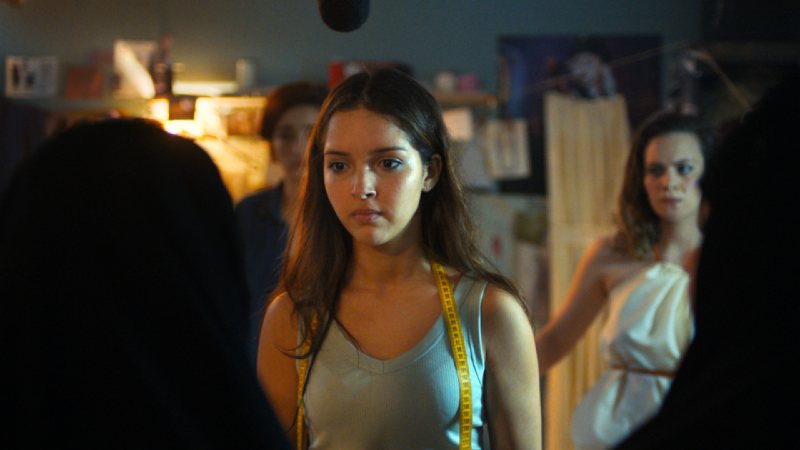 One of the ideas that emerges from the drama is the irony that a devotion to God takes the form of fire and smoke, explosions and bullets, condemnation and bloodied hands. Meddour offers a point of view that religion and scripture need to be emancipated from man’s propensity for cruelty, and our misconception of the need for absolute spiritual devotion. Before our devotion to God is our responsibility to one another, and religion should encourage our empathy, compassion and understanding towards others.

In part based on real events, the memories Meddour shares with us of living under oppression should remind us that basic freedoms are a privilege. We do not have to fear a cold-blooded execution for voicing an opinion or expressing ourselves by some other means. We should not mistake freedom as a human right because in our civilisation it has always been a privilege for some, for others a hopeful dream.

The film is all the more unnerving as we see present day tensions escalate between the American people and Donald Trump. The egregious force used against protesters in Lafayette Square, Washington D.C, and the unlawful arrests by federal law enforcement officers in Portland, Oregon, offer a startling picture of democracy gone awry. Current events in the US penetrate a belief in the resolve of Western democracy to juxtapose itself with authoritarianism.

Papicha is a vital and important film, not only because history should never be forgotten, but by witnessing the struggles faced by Algerian women in the 1990s, the film can transcend time and evoke in us aforementioned values of compassion. The aspirational group of girls and their personal struggles are in a different and more extreme cultural context, but we can discover that we share an emotional and human connection. While politics, economics and religion can put up boundaries, art and film can break these down, and we should allow and encourage it to do so.