"Greasy movie"
In an industry where even dead actors are getting new gigs, Seth Rogen playing two concurrent roles is nothing new, but the way he plays them is the true attraction - on Sky Cinema and NOW on Friday, April 30th

Once upon a time, seeing two stars on the screen at the same time was the kind of technical wizardry that would sell a movie to audiences, such as in the comedies Multiplicity (Harold Ramis, 1996) and The Nutty Professor (Tom Shadyac, 1996). This is no longer the case. Still, two Seth Rogens are definitely better than one.

An American Pickle, HBO Max’s first original movie, offers a unique idea for a story. The year is 1920, and Ashkenazi labourer Herschel Greenbaum (Rogen) moves to New York from his homeland in order to make a better life for himself and his family. Finding The New World less promising than he thought, he accidentally falls into a vat of brine while at his job in a pickle factory, and is preserved for a century. Waking up in the modern day, he finds his Great Grandson Ben (also Rogen), a reserved App Designer living in Brooklyn and in a rut since the death of his parents.

Ben attempts to introduce Hershel to the wonders of ‘the future’, in a charming first act with all the fish out of water comedy you’d expect. Rogen marvels at cabs, virtual assistants, and fulfils his dream of drinking seltzer water. Modern luxuries we have quickly come to take for granted are seen through new eyes. It’s a sweet, well played beginning that nods to the audience at various times and quickly disposes of any scepticism. During a scene where it’s questioned just how any of this is possible, Hershel’s voice-over quickly interrupts to reassure us that “the scientist explained, the science was good, the people were satisfied”. 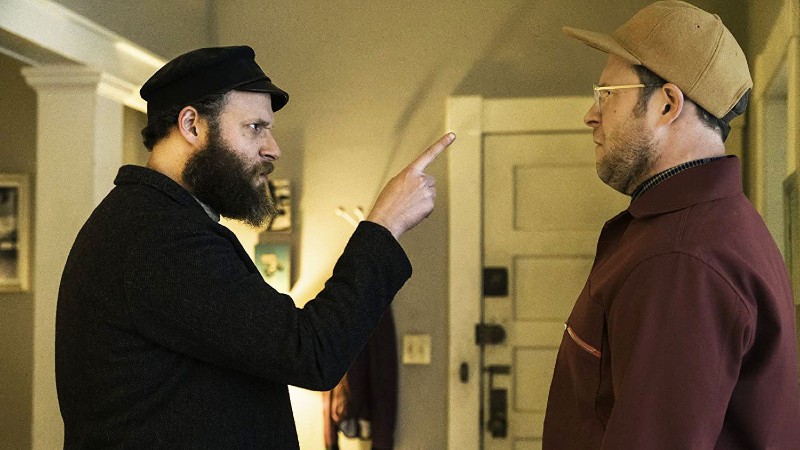 Events begin to unravel once the introductions are finished and the plot has to go somewhere. The pair fall out over Ben’s ambition, prompting Hershel to start a pickle business that is discovered by Brooklyn’s hipster elite, and makes him a social media star. The film’s second act becomes a comedy about start up businesses filled with on-the-nose observations about modern life. We get jokes about the wavering ethics of trendy communities, internships (which Hershel immediately mistakes for slavery), and the hysteria of online buzz.

For a film with such novel beginnings, it treads a familiar path quite quickly, particularly when a jealous Ben sets up Hershel for failure by encouraging him to express his 100 year old views on twitter. The results lose him his customer base but make him an unwitting Right-Wing star in the style of… well, you know who. It’s skilfully devised and many of the jokes will hit home at this moment in time, but there is a nagging sense that the story could have explored something more substantial.

It all gets back on the track as the final half hour comes back to faith and family, giving Rogen the chance to utilise these great performances which give the film its original feel. As Ben, he is closer to the laid back persona we’re used to seeing from him, but a little sadder. The pressure he feels to live up to family expectations, and the distance from his religion created by his grief is relatable and could bear more exploration. As Hershel, he gets to truly perform. Caught somewhere between Borat and Forrest Gump, this principled innocent is a pleasure to follow both in terms of comedy and drama. When told of Ben’s parents’ passing, he hilariously quips “murdered or regular?” The sincerity of the character also allows Rogen to delve into serious scenes in a way he may not have otherwise been able to do.

An interesting tonal stew, An American Pickle gets lost along the way trying to pastiche trends that already feel out of date. However, there’s an honestly to its message, and the dual performances of its star.

An American Pickle is in cinemas on Friday, August 7th. On Sky Cinema and NOW on Friday, April 30th.