The narcissist, the bug and the resistance

Stephen Lee Naish analyses the 2018 post-apocalyptic drama in the light of coronavirus and an increasingly erratic Potus, and he hopes that we won't have the same fate as the movie characters

The length debut of director and writer Mike P. Nelson has an interesting premise. The US government conducts a reset on society by poisoning the population and leaving those immune to fend for themselves. Its opening scene of high flying military planes oozing a black chemical smoke over the entire US is striking and completely terrifying. There is no reason why. There is no explanation. Just a criminality performed by the leading authority to irk out internal strife. Left or right insurgencies are not discussed. The US has “problems” that have been ignored and allowed to fester for years. Eradication of all causes is the only option left.

Whilst the premise is solid the execution doesn’t quite live up to it. But, we’re not necessarily here to discuss that. The film sits comfortably in the low budget genre of recent post-apocalyptic survivalist dramas that crop up from time to time on Netflix’s recommendations. Film’s such as Cargo (Ben Howling/ Yolanda Ramke, 2007), Into the Forest (Patricia Rozema, 2015), How it Ends (David M. Rosenthal, 2018), and The Endless (Justin Benson/ Aaron Moorhead, 2018) all tap into our fears of life during or after the fall of society. How will we survive? Who will we rely on? The film also shares something with the classic film The Warriors (Walter Hill, 1979) in its premise of traversing the domains of extravagantly dressed gangbangers.

Watching The Domestics through the lens of Donald Trump’s presidency and his authoritarian stance against the left in his own country, you can’t help but see that the course of action taken in the film is also in the realm of possibility in his troubled and narcissistic mind. Just a few triggers spring to mind. This is a man who suggested nuking a hurricane and has recently sent militarised police units to quash protests in Portland and other cities. He has also allowed the Covid-19 pandemic (more of which later) to run rampant across the nation with little in the way of sympathy for the dead and their families. Brutalising and humiliating his own citizens is a Trumpian staple of leadership as it has been in his career as a businessman and entrepreneur.

But there is more. In the post-reset world, the survivors have formed bands of survivalist gangs that roam the wastelands between the cities and suburbs. They mostly provoke and pester each other over the limited resources but they also hunt and menace those that might try and cross over their patch of territory. The seeds of this cultish gang mentality are already sewed into the fabric of American culture.

The far right, for example, have fragmented into pockets of hard resistance, nationalism and conspiracy theories revolving around race, gender, guns, and personal freedom. In the minds of conspiracy wonks the US government is already poisoning them from the air through the use of chemical trails and what not. The gangs of survivalists shown here, The Gamblers, The Plowboys, Nailers, and Sheets, have seeds in the current fractioning. Each has a mostly murderous ideology to anything that doesn’t fall into their own slim outlook of life.

The taste of resistance

Our heroes are Nina (Kate Bosworth) and Mark (Tyler Hoechlin), a young couple of middle class suburbanites, who make the hard decision to drive from the relatively safe environs of white suburbia Minneapolis to Milwaukee where Nina’s parents are living in their own community of safe white and wealthy privilege. Mark has his reservations about the journey, one being that Nina’s dad hates him, but with their marriage crumbling along with society around them, he reluctantly agrees.

During the road trip the couple stumble upon the scavengers and the pockets of civilisation that still exist. When they meet Nathan (Lance Reddick) and his wife and two young children, realisation kicks in that civility and even domestic bliss can still be had. They sit down for a delicious meal and a few glasses of red wine in Nathan’s lovely home. However, all’s not well in this version of domesticity. It soon becomes apparent that the meat served in the dish was cooked human flesh.

The domestic bliss of post-apocalyptic society has soured towards murder and cannibalism. It is a foreboding of what Nina and Mark must become in order to survive and thrive in the new world they now inhabit. As Nathan’s wife, Theresa (Jacinte Blankenship ) informs Nina “there is no happiness out there.” Survival is all that’s left. Eat or be eaten. 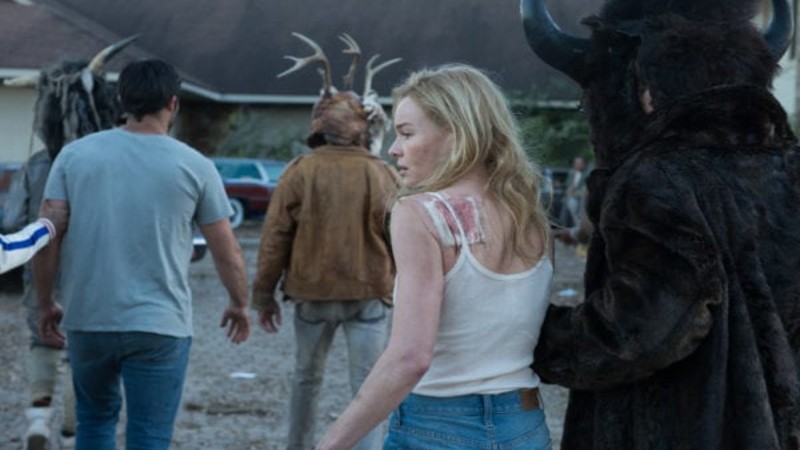 There is another lens that one cannot help but view The Domestics through and that is our current worldwide situation surrounding Covid-19. Although obviously made before the pandemic hit, there is a sense now that The Domestics is a timely film. The pandemic has ravaged most parts of the world and forced us, via lockdown measures, into a kind of isolationism we are not accustomed to. We have to rely on those closest to us far more for emotional support. Some of us have had to lean on the governments of our countries for financial aid. Our social circles have shrunk to a handful of family members. During the narrative of The Domestics, we learn that Nina and Mark we’re in the midst of a divorce before the reset happened, and in the aftermath, and with all the institutions crumbling, they have had to cling to each other for support and survival.

Not only that, but in reality, Covid-19 has infiltrated populations not usually affected by these distant diseases. Alongside the great unwashed masses, the middle class and the wealthy have had to lockdown along with us. They of course can reside in relative comfort, work from home and order food. In the case of overpaid CEOs and celebrities, they can laze around their vast estates in absolute seclusion and safety and like some celebrities decided, record bizarre and unnecessary renditions of uplifting songs to ward off their boredom whilst the remaining populace cope with stress and emotional trauma.

The virus does not discriminate

The Domestics takes place in a US where great swathes of the population have died out and by the looks of it the black smoke that triggered this new version of reality is an equal opportunity agent, just like Covid-19. The disease has taken out the rich, the poor, the famous and the unknown alike.

What The Domestics gets right is showing us the notion that the wealthy and middle class will also have to fight for its own survival. In any world post-Covid-19 or post-Trump the damage has still been done and the changes and challenges are already in motion. Most post-apocalyptic films or films that show society falling apart show the underclass squabbling with each other and raising hell to survive. The titular “domestics” are your office buddies, your professor, your dentist, your veterinarian, your neighbour. Everyone is wrapped up in this.

Not what the future brings.

We’re unlikely heading towards a world seen in The Domestics, at least not yet, but we’re also not going back to a world before Covid-19 and Trump. The economic ruin is festering already, the resentment felt by black and brown people towards the institutions of the police, education, and culture has reached its boiling point across the Western world. The abuse of indigenous peoples has led to protest movements and demands for land reclamation and rights. Most of us have also had it with neoliberalism and unfettered capitalism and the cretinism of most of our modern elite. There is no turning back time. The game is up.

What The Domestics gets wrong about a post-reset world – and I hope I’m right in this thinking – is the notion that those left to pick-up the pieces will turn on each other and form a society of hunter killers and timid prey. My hope is that in any post-anything world those left will not take this path, they won’t break off into class or ideology based factions and tribalism, but join together and reorder society in an egalitarian manner based on shared resources and shared knowledge. If the pandemic has shown us anything it has shown us that the majority of humans are resilient and in the worst of times, actually caring and decent to each other.

The Domestics is on Netflix in the US, on Amazon Prime in the UK and on various platforms on other countries.