"Dirty gem"
Michelangelo Antonioni’s debut feature, a dazzling piece of narrative cinema, is finally restored, and it is now available on Blu-ray and on demand

When a rich industrialist decides to have the past of his young wife Paola (Lucia Bosè) investigated, the detective’s enquiries rekindles an old affair with her former lover Guido (Massimo Girotti). The opening images of Story of a Love Affair offers an interesting portrait of the filmmaker. Missing is the slow, observant approach that would become so familiar. He begins with a rapid fire dialogue and exposition of why Paola’s past is under scrutiny. This is a striking contrast to his fifth feature L’Avventura (1960), where we can begin to see the noticeable signs of his evolution. There is no mystery in Story of a Love Affair – all the sordid details are laid bare. In L’Avventura however, the fate of the woman who has mysteriously disappeared is left unexplained.

With Antonioni, mystery and ambiguity are not necessarily the focal point of evolution. While Paola and Guido are expressive and open, the characters in his later films are silently expressive. He begins to insist that his audience have a more proactive role in reading the characters emotions, and projecting their own thoughts and feelings. Story of a Love Affair contrasts to his later works, and frames Antonioni’s journey as one from extroversion to introversion.

We witness an emerging respect for and reluctance to intrude upon the space of his characters. He chooses to observe or follow, and to not frame them as objects. This compliments the introverted expression and desire to have his audience project. There are signs in Story of a Love Affair that looks ahead to his observational and non-intrusive approach – a lack of reliance on the edit within a scene and longer takes that slow the pace of the film down. 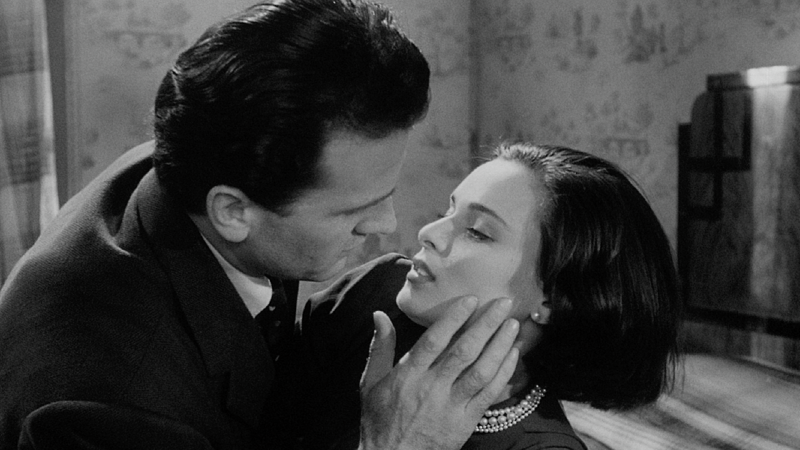 Amidst the fast paced dialogue of the early scenes, when the detective visits Matilde (Vittoria Mondello), a former friend of Paola’s, Antonioni interrupts this tempo by locking the camera. The action revolves around it, the camera only zooming in to pick out an action, and only cuts when it’s a necessity. Story of a Love Affair contradicts Antonioni’s belief that, “A film that can be described in words is not really a film.” There is a clear narrative series of events as past and present collide with fatal consequences. The French writer Pierre Leprohon noted in his book, The Italian Cinema (1965) that The Postman Always Rings Twice (Garnett, 1946) was an inspiration on Antonioni’s film.

The dramatic arc of Lana Turner and John Garfield’s illicit love affair was preceded a few years earlier, when insurance agent Fred MacMurray fell for Barbara Stanwyck’s feminine wiles, in Billy Wilder’s Double Indemnity (1944). Antonioni’s film however is not an act of imitation, instead he changes the narrative that revolves around the premise of two lovers conspiring to murder a husband. Nor is it an act of borrowing from American noir, because the premise is one that pre-dates cinema, used by literary writers such as Émile Zola for his 1867 novel Thérèse Raquin.

Antonioni’s film belongs to a period of notable collaboration between American and European cinema. French director Jean Pierre-Melville drew inspiration from classic American gangster films of the 1930s and 1940s, and American crime films were an obvious influence on François Truffaut’s Shoot the Pianist (1960). Like his French counterparts, Antonioni created a film that had a European sense of feeling, but with an American connection. This feels a bygone era now, an innovative period of filmmaking that presented cinema as a collective unconscious of shared dreams, yet with the capacity for the filmmaker’s individual vision.

We should never underestimate the poetics of the artist nor their tendency to contradict themselves. We can question the truthfulness behind their words and whether they themselves believe them to be true. Our human instincts make us good at lying to ourselves, or saying or doing for the purposes of dramatic effect. Or we feed the reality as we like to imagine it, a stage upon which we find ourselves.

Artists or creative types have a heightened self-awareness, which sharpens the inclinations towards dramatic ideological statements. But such statements can also be the voice of the ambitious dreamer, who wants to propel the art form to greater heights. That we can describe Story of a Love Affair in words does not make it any less of a film. While Antonioni’s debut feature does not honour his words, it occupies an interesting place in his cinematic evolution, a critically important work. It is without question an example of a first great work of a master filmmaker.

Story of a Love Affair is out now on Blu-ray, on digital and on demand

Australian helmer Josephine Mackerras, director of ALICE, talks about the accusations of not being able to let go of her feature debut and reaching a point of frustration with her ending, and much more - in an exclusive interview. [Read More...]