"Dirty gem"
A young woman encounters a sexual awakening after finding traces of smeared lipstick and a strand of red hair, in director Claire Oakley’s compelling psycho-sexual debut - in cinemas and on Curzon Home Cinema from Friday, July 31st; on BFI Player in November

Teenager Ruth (Molly Windsor) arrives at a Cornish holiday park to see her boyfriend Tom (Joseph Quinn). When she finds smeared lipstick stain on his mirror and a strand of red hair on his T-shirt, she becomes fixated on a mysterious red-haired woman.

It’s night, and Ruth watches her taxi leave. In the background the silhouette of a woman stood in the lit open doorway draws our gaze. From the dark exterior to the lit interior where she meets Shirley (Lisa Palfrey), the manager of the holiday park, this simple image, this singular moment is a metaphor for the drama set to unfold.

Director Claire Oakley constructs her psycho-sexual drama with a template of the interaction between the conscious and the unconscious. She directs our attention to the mystery that fixates Ruth and its narrative expectations, before a stirring of Ruth’s sexual desires and eventual awakening – repositioning the film as introspective and not extrospective, of the unconscious exerting dominance over her conscious.

Ruth chooses to repress her suspicions, staying silent as the pair continue to consummate their relationship. This echoes the friction between repression and confrontation that forms the drama of psychology. When she begins working alongside the vivacious Jade (Stefanie Martini), the scarlet nails and the hint of red in her hair only heightens Ruth’s growing fixation. The reason Ruth chooses repression over confrontation is because she has chosen Tom and this place as her escape from home, leaving her with nowhere to go. How this event will impact or shape her future is uncertain, but apprehensively passive, she finds herself caught off guard by something stirring inside.

The film conveys an interest in the angst of transformation and of not knowing ourselves. It motivates us to question how our natures are forged, and are there aspects to us lying dormant, waiting until it’s awoken? Is life similar to the tide washing up on the beach and gradually revealing new layers of ourselves? Ruth’s experience is one that bonds us all, because we are caught between planes we do not control: the unconscious and the external world. While the latter can stimulate us, rousing our emotions and sexuality, so what feelings, thoughts and ideas that dwell in the unconscious can surface. We control neither and both are stimulated by stimuli that we cannot necessarily consciously recognise. Ruth is an example of how our identity and persona, our life is a narrative we co-author with a mysterious metaphysical collaborator. 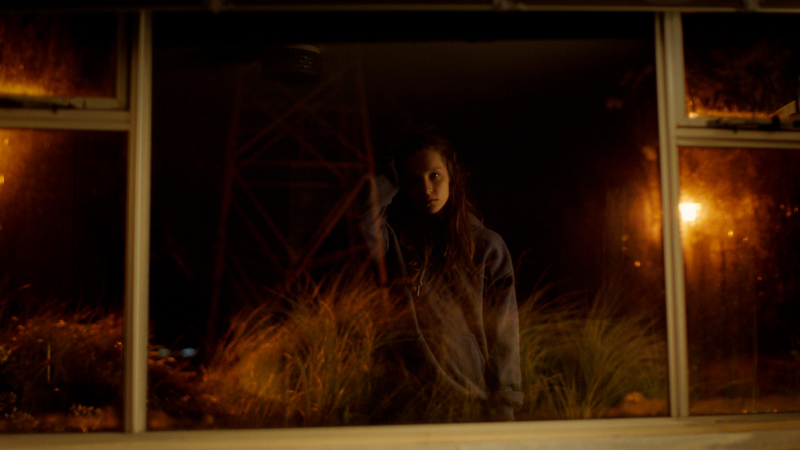 Film is a mosaic or a jig-saw puzzle, and Oakley meticulously puts the pieces of her puzzle together. In one scene when Ruth is picking out a shade of nail varnish, Jade tells her, “It’s not what it makes you look like, it’s how you feel.” These words find the soul of the film, and Jade who is in touch with herself, her emotions and sexuality, juxtaposes effectively with Ruth’s repressed anxiety or ambivalence. The haunting touches borrowed from genre cinema convey the of emotion and desire swelling beneath the surface. It’s about what we can feel or sense, not necessarily what we can see. The haunting set pieces where Ruth sees someone in a vacant caravan, or the eerie feeling that danger lurks, uses horror to convey the tension and discomfort of Ruth’s internal angst. Her unconscious becomes a tangible presence, and yet it does not compromise the emphasis on sense of feeling.

Oakley shows she is a little mischievous, playing her own game of concealment in one haunting moment, by revealing what Ruth saw in a later flashback. She understands the need for her protagonist to know more or have seen more than we have, that turns Ruth’s mind into a labyrinth of images and thoughts, in this case sexual ones that heighten her unrest. We often live or experience life inside our mind, and never too heavy-handed with the narrative, Oakley allows the spark of something to just occur. This is true to the way emotions, thoughts and impulses are triggered without warning. The fading relevance of the smear of lipstick and strand of red hair conveys our shared difficultly to understand the origin of certain experiences.

Those that want to know how this awakening defines her will be disappointed, and they will have missed the point. What this event means for Ruth is unclear, the ending a statement that an experience will come to pass, and however it changes us, we move on with the tide of life. The closing image recalls François Truffaut’s 1959 first feature, The 400 Blows (Les Quatre Cents Coups) – the character gazing out to sea, to the uncertain future upon which they will set sail. For all its uncertainty the drama circles back to the opening visual metaphor, and the definitive transition from the dark into the light.

Make Up is in cinemas and on Curzon Home Cinema from Friday, July 31st. On BFI Player in November.

The Girl With a Bracelet (La Fille au Bracelet)

A teenager is on trial for murdering her best friend in Stéphane Demoustier’s compelling but enigmatic drama - on Curzon Home Cinema from Friday, June 26th. [Read More...]