"Dirty gem"
Three decades ago, eight visionaries quarantine themselves inside Biosphere 2, a self-engineered replica of Earth's ecosystem; find out what happened - on Digital and selected cinemas on Friday, July 10th

A popular history documentary of mid-century America isn’t complete without a quick montage of carefree hippies with bell-bottoms and flowers in their hair. Of course, many of these young baby boomers would eventually decide that it’s hip to be square, but not all hippy communes were so passing. Spaceship Earth tells the story of a commune that was as countercultural as it was ambitious, pragmatic and genuinely brilliant.

The group, led by eccentric polymathic explorer John P. Allen, was inspired by theatre, art, business and science. And instead of picking just one of them, they chose to pursue all. Their first big project took them from San Francisco to New Mexico, establishing the Synergia Ranch 15 miles south of Santa Fe. There they thrived in self-sufficiency and anti-consumerism, displaying all kinds of grit and ingenuity. Key inspirations during this time were notions of ecological disaster, especially those found in the work of William S. Burroughs.

Admirable stuff, but their next project is where Spaceship Earth has you checking the facts (it’s all true). The team relocated to the California coast to build Heraclitus, a sizeable ocean going vessel based on the junk boats of Hong Kong harbour. The ship was a resounding success, giving them access to the world’s oceans and continents. 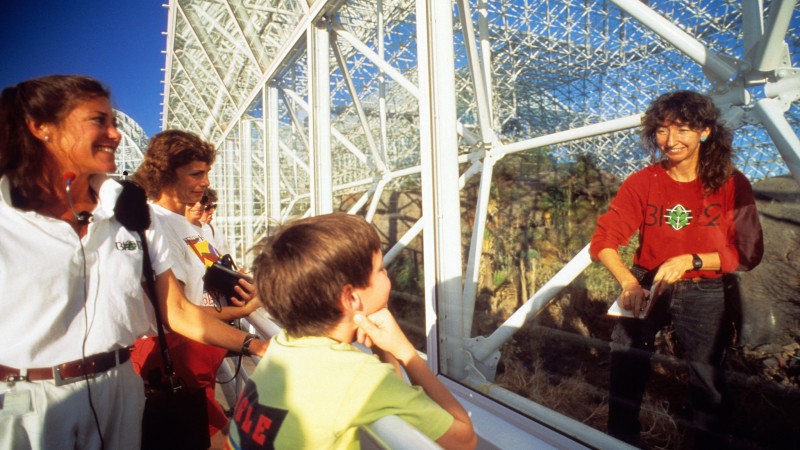 All of the enterprise and freedom is compelling to behold. This is living. But then there’s that nagging question – how did they fund all of this? Well, they weren’t a commune but a corporation; they established companies and turned profits. And not only did they have the business nous to make deals, they had Ed Bass, heir to a billion-dollar oil fortune. Therein lies the formula for success – ideas, leadership and hard currency.

During this period they embodied the idea that “small groups are engines of change”, but their final project would grow beyond their dynamic and their control. It was the Biosphere 2, an enormous domed ecosystem reminiscent of Silent Running, Douglas Trumbull’s 1972 environmental sci-fi. Recognising the weight of this undertaking, the group indulged their pastime of shouty, sophomoric am-dram dross with a production of ‘The Wrong Stuff’, a farce about all the ways in which the project could go wrong. Performing this, apparently, would avoid the problems manifesting in reality. A frank and open discussion would have sufficed, surely, but each to their own.

Alas, despite the majesty of their creation, the $200 million project would unravel before the media, public and Ed Bass’s Wall Street cronies. The damage of cynical mass attention and internal power struggle was just too great. Thankfully, Biosphere 2 would become University of Arizona property by 2011, fulfilling some of its original purpose rather than becoming some meretricious theme park.

The three-tiered narrative of Spaceship Earth captures the big ideas and big energy of the troupe, but it is not a documentary that will make you feel. You are unlikely to be invested. However, it casts light upon a massively overachieving microcosm of hippy culture that, judging by the critical reception, is news to many.

Spaceship Earth is out on digital platforms and in selected cinemas on Friday, July 10th.