Fame and celebrity are as instant and all-consuming as fast food, if not more so, as anyone can be famous with a few keystrokes. Set over a period of three days, Sylwia Zając (Magdalena Koleśnik), a Polish, 30-year-old fitness personality and social media influencer with 600,000 Instagram followers, reexamines her fame and obsession with celebrity after she realises she is being stalked by a perverted fan (Tomasz Orpiński) as he parks outside her apartment masturbating in his car. Inspired by Ricardo Lopez, a crazed fan who attempted to kill Björk in 1993, Sweat is a cautionary tale about fame and the consequences of success in the digital age.

Along with the fear of being stalked, Sylwia is being ousted on the internet after revealing a tearful video message to her followers about the inability to find intimacy in her life. She is never without her phone or recording almost every detail in her life from working out at the gym, leading a fan-filled workout at the mall, or climbing the stairs to her apartment. Sylwia’s fandom reaches such heights that an unknown fan confides to her about her troubled marital life in the mall food court. In her brief moments away from her phone, Sylwia wrestles with inner turmoil and depression expressed through her workout regimen or when she visits her apathetic mother. By the end of the film, I was dripping sweat from the film’s intense third act. 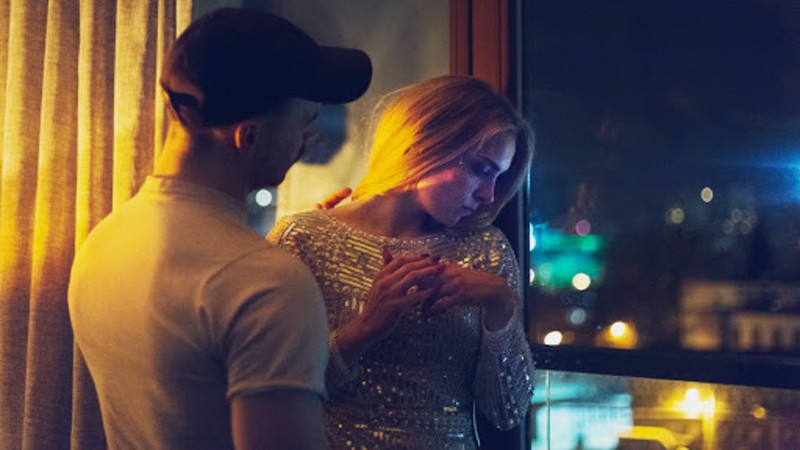 When making the film, von Horn said that “Emotional exhibitionists fascinate me, probably because I am on the opposite side of that spectrum; I keep my emotions on the inside and rarely share them because I fear being judged. So, when I meet people who effortlessly and without shame express themselves I feel envy. On social media, I am a passive observer.” Von Horn’s objective camera uncovers Sylwia at her most raw and vulnerable when she’s taking selfies after going to the gym or putting on makeup with a giant portrait of her with a Medusa-stare in her mirror-clad apartment.

There is a shot of her entering her apartment building that echoes the stalking, female gaze in Hitchcock’s Rear Window (1954), and Brian De Palma’s Body Double (1984) foreshadowing the events that would change her life. Additionally, von Horn evokes the satirically flamboyant and vein decadence of Paul Verhoeven’s 1995 Showgirls (minus the hardcore nudity and Joe Eszterhas’s bog roll of a script) along with intense close-ups of Sylwia in her apartment that is not dissimilar to Catherine Deneuve’s paranoid-ridden heroine from Roman Polanski’s Repulsion (1965).

At the centre of the film is Magdalena Koleśnik giving a stunning performance of a fitness guru who is emotionally out of shape. We first see her full of energy and pep when she’s working out with her legions of fans, but in her moments of working out alone, it’s as if she is chastising herself into the body that she wants rather than the body that she already has with the deep-seated desire for perfection. If there’s one film that’s sure to provoke debate over internet-based celebrities and the insular-based nature of social media, Sweat is pouring with all of that and more.

Sweat was part of Official Selection of the 73rd Festival de Cannes. In cinemas on Friday, June 25th. On Amazon Prime in July. On all major platforms on Monday, August 23rd. On Mubi on Friday, September 17th.