"Greasy movie"
A monster becomes a metaphor for violent and painful changes, in this solid piece of genre filmmaking - American horror is now on VoD and Blu-ray

Hank (Jeremy Gardner) wakes up alone one morning in an empty home with a cryptic parting note from his girlfriend Abby (Brea Grant). Heartbroken and depressed, he finds himself visited by a mysterious monster nightly. When his reports of the strange nightly occurrences to his best-friend Wade (Henry Zebrowski) and Abby’s brother, police officer Shane (Justin Benson) are met with scepticism, Hank slips further into paranoia and loneliness.

“What would an ocean be without a monster lurking in the dark? It would be like sleep without dreams” said German filmmaker Werner Herzog. In the same breath, cinema without its monsters would be lacking a presence that goes beyond simply a series of terrifying forms.

From the early days of the Universal horror movies, and the question whether the creator or the creature is the monster in Frankenstein, their purpose has been nuanced. Fast-forward to 1995 and the vampire Peina, played by Christopher Walken in Abel Ferrera’s 1995 horror The Addiction, speaks about having almost overcome his monstrous addiction. It’s a story that positions vampirism as a metaphor for not only addiction, but the tussle with impulse over reason, and the concept of guilt with a self-loathing towards one’s identity. And in After Midnight, the monster turns up at the door and claws to get in. Hank fires his shotgun to repel its attack, with repeated skirmishes until one of them is dead.

Abby tells Hank, “You have everything you want here” and hypothesising about if they’d moved away to the city, where they could hear the neighbours above them and the traffic outside, she tells him he wouldn’t have had, “any of the things that made you, you or gave you purpose.” Hank’s heartbreak and his fractured relationship with Abby gives meaning to the savage monster, wrapping it up in the motifs of the story. 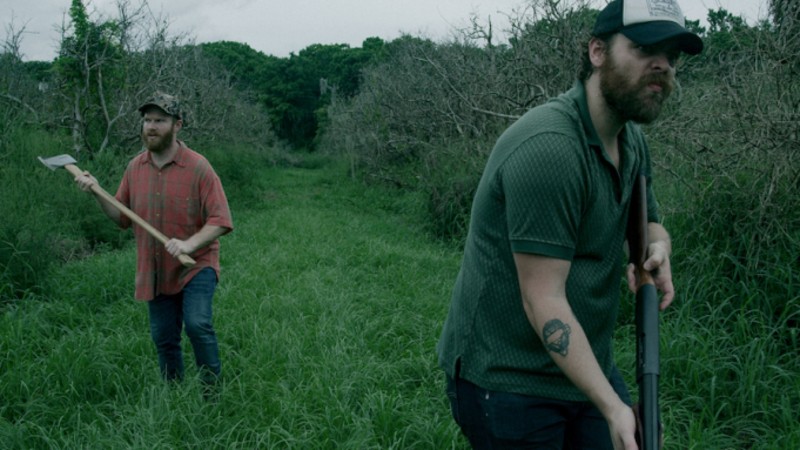 After Midnight is about a common experience of compromise, of two people converging their personal life paths to travel the future together. Writer/director Gardner and his co-director and cinematographer Christian Stella offer us a snapshot of the conflict between the need for a soul mate versus one’s nature and sense of purpose that compels a reluctance to change.

The film is structured around the monster as a metaphor for the competing desires that the two sides of Hank have for his future. It’s a physical manifestation of the emotional and psychological reluctance to change, allowing the struggle between man and beast to neatly tie in with the fate of the relationship. The film is about how change is a violent and painful process, and it questions the realistic expectation that someone can change by discovering new things to fulfil the needs of their sense of self, and to find a new purpose. It’s also about how we can become a prisoner within ourselves should we not change and grow with a soul mate.

In contrary to this deeper and thematic thoughtfulness, After Midnight is a subtle nod towards those simple but effective plot driven genre movies, particularly John McTiernan’s Predator (1987). It’s difficult to not perceive beyond the personal drama of heartbreak a simple plot of a monster that picks a fight with a hunter, that is essentially Predatoresque. Through the filter of Gardner and Stella’s creative voices however, After Midnight feels original in its expression.

For much of the 83 minute running time, the pacing is sharp, but sadly towards the end Gardner and Stella seemingly become apprehensive to pull the trigger on the moment that will resolve the story. Adding to this noticeable distraction, the staging gives an impression that the filmmakers were struggling against the pressures of budget and time. In spite of this one qualm, After Midnight is a solid piece of genre filmmaking, one whose delights outweigh any imperfection.

After Midnight is out now on all major VoD platforms. There is also a limited edition Blu-ray from Arrow Video.