"Dirty gem"
Daddy passes away and leaves behind a shock inheritance that could destroy his family's life, in his American thriller starring Simon Pegg and Lily Collins - on DVD and Digital on Monday, July 6th

Bereft of her father, Lauren (Lily Collins) is left in the unenviable position of smiling to a lawyer who siphons the family fortune to her brother. What her father has left her is an envelope, sealed with the promise that she can discuss the contents with no one else. Instructed by a video to search for her treasure, Lauren comes face to face with Morgan (Simon Pegg), a garrulous, gaunt prisoner trapped by her father’s hands.

This is Pegg’s creative acme as an actor. Past projects with Edgar Wright, namely Shaun of The Dead (2004) and The World’s End (2013), showcased a passion for horror, but this is a different beast still. Pegg, best known for his chirpily buoyant performances, is relishing the chance to play foe over friend. He’s almost unrecognisable in appearance, masked by a troubled, tousled hair-lines. Marking his prey with contemptible gaze, Morgan looks at Lauren, not with Hannibal Lecter’s arch adulation, but guttural, unkempt hatred. We’ve become accustomed to comedy actors switching to darker genres, but this is a bloodied, even shocking, transformation from Pegg. 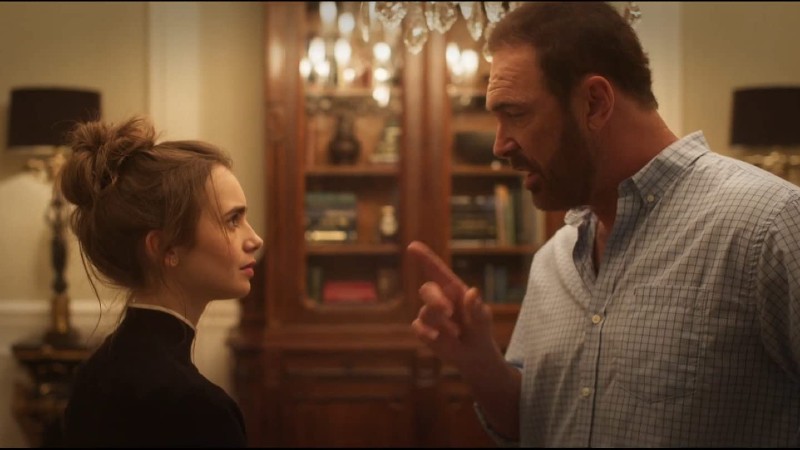 More than that, he’s the ghoul that shakes Lauren’s family to their rancid core. Shackled to his chains, Morgan spits out the many times her father acted with the economy of murder over the economy of finance. Lauren’s mother (Connie Nielsen), remembers the prisoner as one who nearly brought ruin to her marriage, before a revelation, too shocking to include in print, brings Lauren to question her supposed heritage.

Beneath these trappings, Lauren finds herself growing more powerful in the wake of great evil. It probably wouldn’t pass the Bechdel test – any conversations between female characters concerns Lauren’s father or prisoner – but Collins provides a steely, even vital, performance from the proceedings. Marrying conversations to chess pieces, the film moves like a board game, though the rampant, rigid killings might upset certain audience members. Some of the violence levelled at Lauren is uncalled for, even in a horror movie.

Instead, the film calls to attention Pegg’s acting. Take, for instance, the scene in which he finds himself, for the first time in three decades, a free man. Dressed in silver, sartorial evening wear, Morgan breathes in the chilly, cracked evening sky. In it’s own artful way, the scene symbolises Pegg’s performance: it’s a breath of fresh air.

Inheritance is on DVD and Digital on Monday, July 6th.