As Dennis Hopper's Out of the Blue turns 40, Steven Naish investigates what is it that makes the dirty movie indelible and delectable

This year marks the 40-year anniversary of Dennis Hopper’s Out of the Blue. This movie marked Hopper’s third directorial effort (after Easy Rider in 1969 and The Last Movie in 1971) and, in a filmography of iconoclastic and uncompromising work as an actor and director, perhaps this film marks his most vitally charged and disturbing film. Thanks to a successful Kickstarter campaign, a 4K restored DVD/Blu-ray version of the film (click here for more information about the restoration project) is being released later this year by John Alan Simon and Elizabeth Karr of Discovery Productions. An interview with John Alan Simon accompanies this piece.

Out of his mind

The story goes that at the tail end of the 1970s, Hopper, then an outcast from mainstream Hollywood film due to his substance abuse and wildman personality (see Francis For Coppola’s Apocalypse Now, 1979, for reference), was cast in a small Canadian television film production, which at the time was titled The Case of Cindy Barnes (1980). The film’s inexperienced director, screenwriter Leonard Yakir, soon jumped ship after a few weeks of shooting turned up no usable footage. The project was all but abandoned by the cast and crew. Seeing an opportunity to take over and direct the project, Hopper convinced the producers and backers of the film to give him a shot. With little to lose, they agreed, as long as Hopper could complete the film on time and within budget. Feeling the film was a potential lost cause, they also gave Hopper full creative control.

After taking control of the production, Hopper rewrote the screenplay in a mad rush, and cast the film in a much darker and nihilistic tone than what was originally intended. The film now dealt with the terrifying ordeal of Cebe (Linda Manz), a young teenage girl destroyed by abuse and violence at the hands of her father Don, portrayed by Hopper. In his role as director and screenwriter, Hopper also reduced a number of key characters.

Seasoned actor, Raymond Burr, for example, was a central character at one point in the film’s production, playing the child psychiatrist who redeems the story, but this role was reduced to nothing but a cameo. 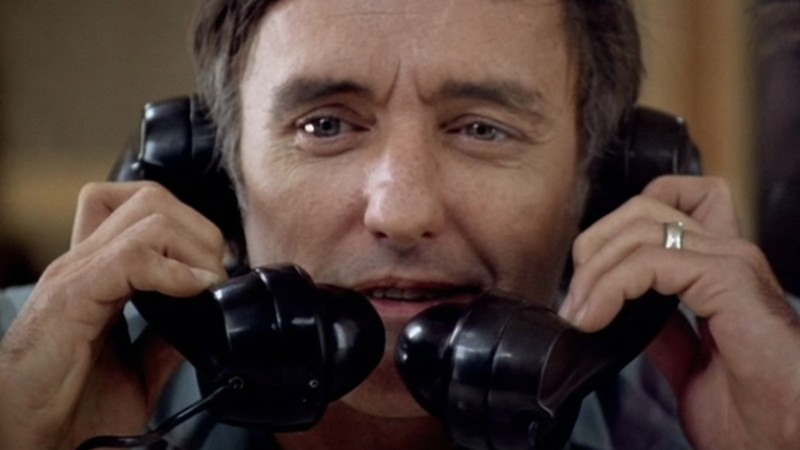 The finished film, shot in four weeks and edited in six, and now titled Out of the Blue, became one of the most uncompromising films of the early 1980s. Predictably, it was a commercial failure, although the film was entered in competition into the year’s Festival de Cannes and played well with film critics. However, the film’s failure really came from the provocative subject matter that dealt with child abuse, incest, and the corrosion of the American family unit, which wasn’t a positive selling point to an American audience wishing to embrace a more positive and conservative outlook of traditional family values and patriotic vigor that was endorsed by the Ronald Reagan/George Bush presidential team run that was occurring at the same time. Reagan’s campaign slogan of “Let’s Make America Great Again’ was a reactionary statement to the ethos of Hopper’s generation and the artistic, and sometimes inflammatory work they produced. An effort to take America back to the time before the 1960s and erase that decade’s social gains was in motion.

Out of the Blue had a better reception critically and commercially in the European market, although it remained banned in the United Kingdom until 1987. At the time, The film gathered a cult following with audiences seeking it out at late night theatre screenings and finding pirated videotape copies to view at home.

Hollywood did not come crawling back apologetic, as Hopper had hoped it would. Instead, Hopper had succeeded in producing a film that was so disconnected from the mood in mainstream America that nobody in their right mind would allow his vision of America on screen again until it could be softened.

Out of the stereo

One of the best elements of Out of the Blue, and one of its real driving forces, is the film’s soundtrack that perfectly syncs with the film’s energy. It seems only fitting that the songs Hopper chose to soundtrack the film would summon up a wide experience of emotions and the loss of childhood innocence and the darkness that followed. From Elvis Presley’s sweet and chirpy My Teddy Bear, to Neil Young’s brooding My My Hey Hey (Out of the Blue). Young’s poignant lyrics about how “It’s better to burn out than to fade away” echo the nihilistic ending where Cebe, after murdering her abusive father, kills herself and her mother by blowing up her father’s derelict truck with sticks of dynamite. Hopper captures the darkness that lies at the heart of Young’s song perfectly.

Out of the Blue also incorporates live performances from Canadian punk rock band, The Pointed Sticks. After running away from home to the city, Cebe wanders the downtown and enters into a club and encounters the band performing live. She is invited by the drummer to bash at the skins as the band rattle through a rendition of their song Somebody’s Mom. This is the one act of catharsis within the film. Cebe is allowed to enjoy this one moment, and as we the audience experience the invigorating blast of punk energy, we’re also given a brief reprieve from the narrative.

The triumph of Out of the Blue’s soundtrack is the trajectory that takes music of the 1950s/1960s music, and the ideals of that era towards punk rock and its reaction to those ideals. The countercultural ethos that had originated in the 1960s had morphed into a critical backlash in the late 1970s. Punk, although anti-authoritarian and anti-consumerism, was also deeply anti-hippy. The long hair, flared pants, flowery shirts, and peaceful disposition of the hippies, had mutated into short spiky hair, tight bondage pants, pins, studs, and an aggressive and abrasive posture. The audience of Hopper’s 1969 directorial debut film, Easy Rider, who had embraced peace, love and understanding were now in the firing line of punk rock’s nihilism and Hopper was the one holding the gun. 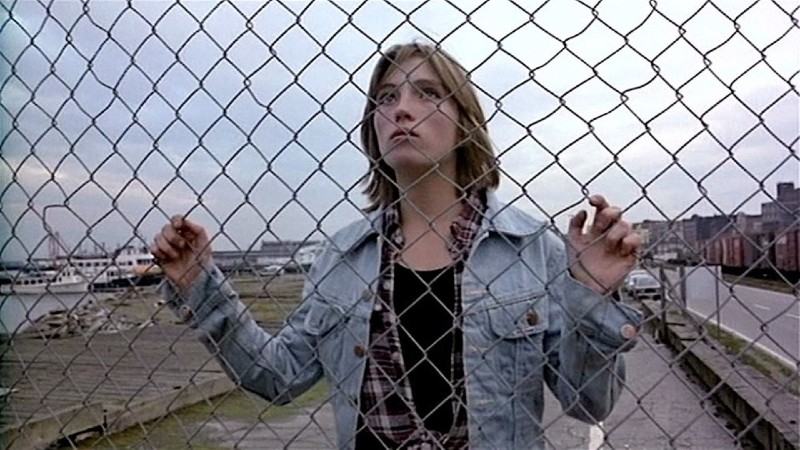 What became of Dennis Hopper after the release of Out of the Blue is a sad tale, but with a redemptive arc that makes the downfall all the more intriguing. Consumed by booze and drugs, his health deteriorated to such a point that the late 1970s and early 1980s were a wasteland of bizarre drink-fuelled performances. His role in Frances Ford Coppola’s Rumblefish (1983) as the drunkard father to Mickey Rouke’s Motorcycle Boy and Matt Dillon’s Rusty James, is believable only because the drink is literally sweating out of his pores and damping his fill-fitting suit. Hopper was so out of it during the filming of Neil Young’s 1982 musical comedy, Human Highway, that whilst performing knife tricks he severed a tendon in his co-star Sally Kirkland’s hand, which he was later sued for. Yet, perhaps the role that best summarises Hopper’s downfall is that of a failed music manager in German director Roland Klick’s little seen White Star from 1984. Completely shunned by the American film industry, Hopper’s performance in this film is crazed, erratic and mostly improvised due to Hopper either forgetting or not bothering to even read the script. Klick points his camera and lets Hopper run his mouth and method completely unfiltered.

When Hopper did eventually get clean and enter rehabilitation in 1984/85, his career was in shatters. But with a few smaller parts in mid-1980s movies such as River’s Edge (Tim Hunter, 1986), Texas Chainsaw Massacre 2 (Tobe Hopper, 1986), My Science Project (Jonathan Betuel, 1985), Hoosiers (David Anspaugh, 1986; for which he was Oscar nominated) and Blue Velvet (David Lynch, 1986), Hopper regained ground and respect from filmmakers and audiences alike and set him on the road to becoming a well regarded actor and director.

Forty years on, Out of the Blue still resonates with a kind of kinetic energy that only seems to belong to Dennis Hopper’s work. Every scene that Hopper directs within this film seems ready to explode into violence. Sometimes it literally does, as witnessed when Hopper pours a full bottle of whiskey over his own head in order to intimidate a guy who wants to take him outside for a beating. Or when upon hearing he has been fired from his job at a landfill, drives his excavator into the foreman’s cabin and then cracks open a hip flask as a toast to his destruction.

Most of the time, however, Out of the Blue simmers rage, an underlying and targeted anger towards everything and everyone. What was Hopper angry at? Not being recognised or appreciated as an artistic filmmaker? Not being regarded in Hollywood as a leading man? Allowing the ethos of the 1960s’s hippie movement to sour and curdle into the neoliberal hellscape of Reagan’s America? All of this and more. Most of Hopper’s anger is channelled through Cebe. She becomes the film’s anchor, hating on everyone and everything and by the end of her short and bright journey we, the audience, feel her actions to “burn out” are justified. In her actions, she not only snuffs herself out, but the entire misguided judgement of the previous generation that promoted peace and equality, yet sold it all down the river. Out of the Blue is one long fuck off to the past, present and future, which as Cebe, echoing The Sex Pistols, states is all “Pretty vacant, eh?” Certainly, the mainstream culture surrounding the film might have been vacant, but Out of the Blue explodes with ideas and a vision so bright and vibrant. Four decades haven’t softened it, in fact, the time lapsed has only made it more vital and more relevant.

All the stills in this article are from Out of the Blue.