The spirits of the ancient capital Fujiwara-Kyo, the birthplace of the Japanese nation is shrouded by mysteries revolving three mountains that have marked generations of a small village, presently manifesting through a relationship of a woman, her husband, and her lover. Naomi Kawase’s Hanezu, which is based on a novel by Masako Bando, is a contemplative work of naturalism, a cryptic sensory of mysticism, spirituality, serenity and tradition told through sparse dialogue that may parallel viewers to the intangible voice overs of Terrence Malick and the subliminal vistas of Apichatpong Weerasethakul (Uncle Boonmee Who Can Recall His Past Lives, 2010, and Cemetery of Splendour, 2015).

Kawase’s 13th film demonstrates a philosophy weighing no monotonous reformation of the characters who find themselves at some point in their lives understanding the means of Zen. The transition of disquieting what absurdities may seem to triumph over the free will of desire because of the tradition of things in life (in reference to marriage, mothering a child, what we choose to pursue and what we choose to build) that may ultimately force one to recount a long forgotten desire, or an abrupt desire burdening no simplicity in our dealings with life, itself.

That makes for an anomalous definition of the principle which any conflicted individual practising hopes to suppress, it makes for a realisation so heavy and yet reassuring: nothing in life is simple, for it is just. Not that Takumi (Tôta Komizu) or Kayoko (Hako Oshima) at any point of the film bring the term of Zen to discussion, though much of their intimacy is grounded in moments of complete stillness and stares, and what repercussions will come from their affair Their conversations are more spiritual than they are realistically banal which is completely in contrast to how Takumi’s relationship is with Tetsuya (Tetsuya Akikawa), her awfully absent but loving husband. Their marriage consists of cooking (precise detailing in their use of safflower and gardenia), grocery shopping, morning and nightly small talks. Tetsuya is pretty much absent through most of the story but there is somewhat of an interesting revelation that can be made about him and how he comes to a decision unveiling a shame he bears.

Hanezu is like an open journal of thoughts and mood, there is a great deal of loss and tragedy unfolding in layers of incremented validities neither Takumi and Kayoko are even emotionally equipped for. Their affair is more nurturing than it is mischievous and romantic. In an early scene of the film, Kayoko cuts his finger and Takumi gently kisses it, then she begins to suck the blood off his finger. He smiles, she smiles, he laughs, she kisses his finger again, he reaches close and kisses her head, they hug. This moment is handled quite beautifully, portrayed to be neither exotically raw or thematically mawkish, it’s just, sweet. They ponder on, ask questions like “Whose face will you see just before you die?” and immerse in the doings of day-to-day diversions that feel more fulfilling and hopeful than when they’re living their own separate lives. 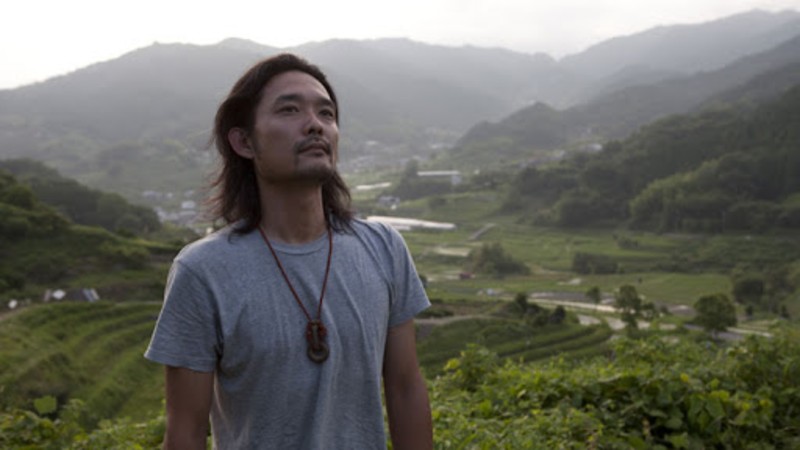 Somewhere in the middle of the film is a storyline following a long deceased family member, a ghost, a drafted soldier who is of past and present and of life and death. This ghost crosses paths and conversations organically happen. Why he’s here and why Kawase generates this paranormal meander isn’t ever really conveyed. It’s bold, sure, but not because it’s a precipitous symbol of the meta, which thankfully, isn’t forced even if it were to pose it. Such an addition to an already stoical film isn’t even a narrative device but a poignant confrontation between past lives and the spirits carrying on. Thematically, this paranormal consciousness serves as every persons’ dealing with the family legacies from the generations before them. How Takumi and Kayoko interact with this memory in the form of the ghost is really more obviously transparent than it may even come across.

What we learn from both Takumi and Kayoko is that neither person feels fulfilled with their place in time and the happening. Kayoko wants a child, Takumi wants . . . Well, it’s almost difficult to really pinpoint what Takumi wants. She wants to pursue real love, yes, but will that be enough for her? Does this real love reform her perception, and what exactly is that? What if she doesn’t want to mother a child? What if she no longer complies with the remorse and tremor of both Kayoko and Tetsuya (a husband who is no longer a husband in her eyes but a voice and a figure sharing a home) ?

These are the afterthoughts of what becomes of Hanezu, a film that will find parallels to Eric Rohmer, Malick, Angela Schanelec and Hong Sang-soo. This is probably her finest film, one which offers no explanation to what’s being seen (as any daring filmmaker can and will do, but to what achievable effect?) and yet, for only about 82 minutes of running time, says so much with a sparse of conventional telling in what movies of this kind are expected to explore. There’s a specificity with how she frames the observations of her characters. There’s a mellowness to it, an appreciation for a splendour vastly emphasised on the interactions we have with food, putting things together, creating and what subtleties our eyes choose to prolongedly reverie.

There are so many moments of Takumi and Kayoko cutting food, of Kayoko carving an ancient cedar, and Takumi draining sheets of cloth into red wine; Kawase conveys these intimate interactions with extreme close ups. The hands, like the face, emulate a conviction Kawase puts to bare with a patience and muteness recounting the years of it. There’s a great use of green in this film, the lands, the trees and the leaves. The imagery is a retelling of the nature of birth and death. Each shot – whether still or handheld – of her work is seriously considered, they constitute the life within the life of the story. She’s a filmmaker who sees life in everything that is still because everything which lives at some in time, stops. There is an interaction we have with anything that’ll influence the intimacy we share with another. Be our ideas, our beliefs, our appreciation for what’s at full display.

More than a century later, Charlie Chaplin's first masterpiece remains both a marvel of ingenuity and a tribute to innocence - watch it now with DMovies [Read More...]

Let the beast out of the cage! Isabelle Huppert stars in absurdist drama about powerless teacher grappling with her rowdy and unimaginative pupils, until she begins to morph into something else - now streaming with DMovies [Read More...]

One move is all it takes! Vincent Cassel plays a fundamentally decent man whose life is turned upside down due to one single extraordinarily bad mistake, in French genre-bender - streaming now with DMovies [Read More...]