"Greasy movie"
Three American friends on their way to a remote country house encounter a group of sadistic killers, in this popcorn slasher tearing apart right-wing conservatives - on VoD and DVD

Roger Ebert wrote: “I don’t require movies to be about good people, and I don’t reject screen violence”. It’s a sentiment I share, having long renounced the belief that the protagonists of a story need to be sympathetic people. This was in all likelihood a naive impression that belonged to youth, that gave way to the priority that a protagonist should be interesting and not necessarily sympathetic. To the second part of Ebert’s point, why one would reject screen violence seems irrational, as humanity is innately violent, and while an uncomfortable depiction, it’s a reflection of our base instincts.

Violence comes in different guises, and opposite Sam Peckinpah’s balletic violence, with the unnerving consequences. This is popcorn violence. So sit back and savour it. Unlike the ideas of human psychology and human nature, as well as the fallout of cause and effect that shone through in Peckinpah’s violence, the bloodletting in Meyers’s film is theatrics. It’s an approach in which the story comes from the violence, instead of from the story and the choices of the characters. But the characters in We Summon the Darkness refuse to remain silent, and themselves heard.

The idea of “good” or “bad” people has limitations because it serves as a simple means of identifying a person. Here the antagonists are more complex and transcend the dichotomy. In the set-up for example, we see that Beverly has lived a past life that contradicts the image the men have of her. Stories typically feature a redeemable character and in this one it is Beverly, who is less committal than Alexis and Val killing these three lust filled men. 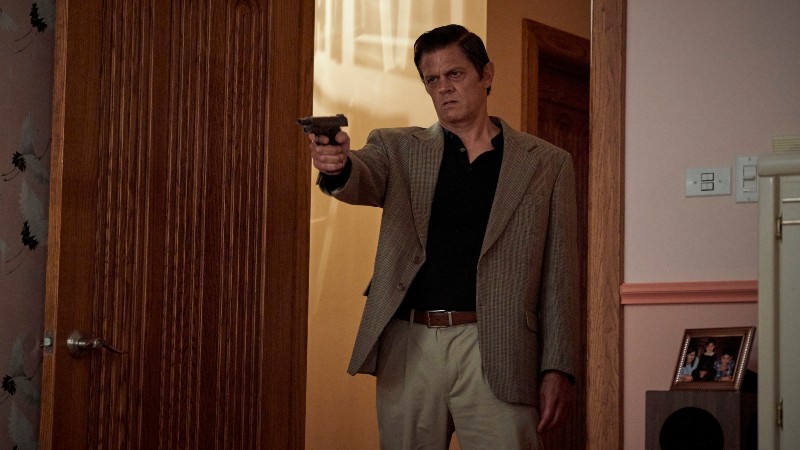 While both Alexis and Val are wicked in their intentions, there are layers of evolution to their cruelty that is never explored, only inferred if one keeps an open mind. If both were good women turned wicked, then they are victims, and that demands that we are more sympathetic in our judgement. Yet even in their wickedness, there’s a semblance of moral goodness, however misguided it is that complicates matters. Meanwhile, Beverly as the redeemable character infers how the story of Christ’s temptation in the desert by the devil is influential on storytelling. She also grasps the Jungian concept of confronting one’s shadow complex, which frames the film as her hero’s journey. She says to a gas station attendant who is watching a news broadcast on the TV, “You shouldn’t believe everything you see.” In present-day US it’s about not believing everything you hear from right-wing conservatives, and Beverly’s journey is one towards victim or empowerment in the shadow of this malignant threat.

If genre cinema captures a snapshot of it’s time, then Meyers through his comedy-horror aligns against American right-wing conservatives – gradually revealed as the chaos of the second act unfolds. The killings in the film eerily strike a chord of the Trump Administration’s indifference towards lives of American citizens in this pandemic, while also how the conservatives play with narrative, manipulating it to fit their own. It frames Trump’s cry of “Fake news” as a projection, those themselves who are guilty of cultivating this alternative narrative habitually accusing others.

Working from Alan Trezza’s script, Meyers shows a clear intent of the story he’s trying to tell, and while the story comes from the violence, the characters effectively offset the spectacle. He paces the film well as it transitions from set-up to conflict, and reveals the motivations of his characters and their plan, while throwing in unexpected obstacles that sustains the suspense. We Summon the Darkness is an intriguing film and while the material could have been developed, to the credit of the filmmakers, it stays true to being an entertaining and bloody yarn, and not metamorphosing into something driven more by themes and ideas.

We Summon the Darkness is out on VoD in April, and on DVD on Monday, May 11th.

The boy before the murderer: Marc Meyers' My Friend Dahmer is a portrayal of the most prolific gay serial killer before he started murdering people, based on a graphic novel by his friend Derf - in cinemas and VoD [Read More...]