"Dirty gem"
More than a century later, Charlie Chaplin's first masterpiece remains both a marvel of ingenuity and a tribute to innocence - watch it now with DMovies

It will always be said Chaplin was a master at turning sight gags into resonant commentary, that within the world of the tramp, the lone prospector, the factory worker and the Jewish barber — simple like individuals whom distinguish a humbleness with their buffoonery, while also impressionable in their benevolence that made them virtuous and hopeful. Their realities spoke for the generations before them, amongst them, and so forth, within our modern times. Ultimately, yes, the greatest gags under Chaplin’s repertoire have had a cultural prestige for those who’ve perceived comedy as a means of reflecting the absurdities, the enormities, and the humanity of people.

The premise of A Dog’s Life, Chaplin’s first million-dollar film, is pretty formulaic and would eventually become hallmark Chaplin, though in a streak of maturing flair. That is not to discredit the winsome narrative of this sophomore gem because the endearing companionship between the Tramp and Scraps (Mut) is a beautiful statement in itself. Like Jackie Coogan’s kid, Scraps is both adorable, curious, loyal, and at the centre of one of the Tramp’s most realised episodics.

The gags would be the first great use of Chaplin’s comedic skill. From an attempt to schemingly eat an excessive amount of pastries without getting caught, to a copper chase sequence that results in a back and forth tug-a-war beneath a fence, and a dance number involving the tramp, Edna Purviance and Scraps that results to the film’s biggest laugh; the tramp, contextually speaking, is seen as a survivor of the inner city slums, and from his desperation comes a great degree of farcical undertakings. Each gag builds up to the perpetual joke meriting the wonder of Chaplin’s physicality, and clemency. To see the Tramp brazenly make an attempt at playing a schemer only to become the solemn fool is a majestic perception of how Chaplin perhaps saw the best in humanity.

Scraps is not only an adoring addition to the mischief, but an embodiment of the quintessence, manifesting a gleeful camaraderie that ultimately sums (and rather quickly, too) the realised theme of A Dog’s Life, a title that’ll mislead new viewers for it is not a story of a dog, nor a story of the tramp, but a scenario involving both whom regard no distinctions as they do indistinguishably.

Who isn’t inspired by Chaplin, really? There’s an excitement and sense of pure elation when watching one of his films. There’s no cinema simply like it. One cannot compare to Chaplin, not even Keaton, Lloyd, Purviance, Pickford, Moore and Laurel and Hardy. There’s a greater response of awe to their creations than the modern blockbuster extravaganzas. Perhaps because when watching the innovations of the Silent Era, we’re instantly reminded by the very first frame of the physical labour venturing the designs of production right at the forefront. 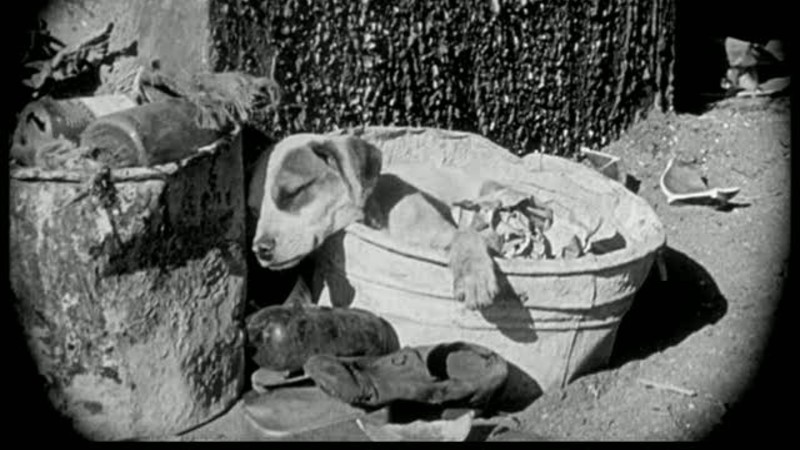 Perhaps even now we’ve taken our regard for Chaplin more solemnly as a means for rediscovering the passion that is muddled and lost in the trends of modern glamour, excessive social media distractions cultivating the spurious connotation of movies, and the hubris personalities coexistent to a perennial capitalist Hollywood. Chaplin is a model of cinema, to watch him at work during the set of The Great Dictator (1940) from a behind the scenes short shot by Sydney Chaplin is to endure twenty five minutes of historical splendour. In 1918 he moved into a studio in the grounds of an old mansion in the corner of La Brea and De Longpré gathering footage with his cameraman, Roland Totheroh that would turn into Chaplin’s entertainingly informative How to Make Movies (1918). He had no other ambition than to present to the world that exact passion which emphasised his meaning and relationship to the world.

Senegalese filmmaker Djibril Diop Mambéty would go on to make films echoing the thematics of Chaplin’s the tramp with Badou Boy (1970), Touki Bouki (1973) and the unfinished Tales of the Little People trilogy, for Chaplin’s cinema was something of an event for school children of Senegal, a sight generating an enormous sentiment of hope and unity. It would be hard to imagine a cinema that did not historically include Chaplin, for even his later talking pictures Monsieur Verdoux (1947), Limelight (1952), A King in New York (1957), and A Countess from Hong Kong (1967) came from an innovator generating a long lived enthusiasm as an attempt to transition within a counterculture of Hollywood that changed the way we make and perceive filmmaking, forever.

A Dog’s Life could be considered his very first masterpiece. It’s been played as a back to back viewing with The Kid (1921) which shares the same premise. A Dog’s Life is a smaller film, less nuanced with the romance between the little tramp and Edna Purviance, it can even have a few more scenes of Scraps, who’s played impressively by the trained Mut. Its resonance is powerful, yet heartfelt and a marvel of ingenuity. This is the kind of comedy we don’t get to see, anymore. From a relentless trend of sex comedies and hashtagging referential nods, A Dog’s Life is a refreshing reminder of how even great comedy can come from such an innocence while also commenting a reality of life we often choose to ignore.

“What dreams may come” as the film’s opening title card suggests, is a sentiment long living and true.

Stream A Dog’s Life right here with DMovies and Eyelet:

CHARLES CHAPLIN WAS RIGHT: DONALD TRUMP IS A LIAR. FROM OUR ARCHIVES - "Brutes have risen to power. But they lie!" Find out why the final speech of Charlie Chaplin's The Great Dictator is more urgent than ever, and that Trump's empty promises are a mere cover for very dirty things to come [Read More...]