"Dirty gem"
This British comedy about teenagers searching for love before learning to love themselves is a real delight to watch - on VoD from Monday, May 4th

It helps that the pain of adolescence is every bit as sturdily malleable as it was for Weller in the 1980s. Much like the power punk trio, Soundtrack To Sixteen chugs with a fiery, almost rock heavy, energy. Certainly, Maisy has the makings of a rock star, holding back the tears she wants to cry for a series of snide, contemptuous remarks. Maisy, like many teenagers, would rather smoke and drink with her friends on Halloween than spend it trick or treating with the nieghbourhood children. Her heart, torn as it is, mirrors Ben’s homework: a paper project thrown down a cubicle when the grade fails to meet his impossibly high standards. 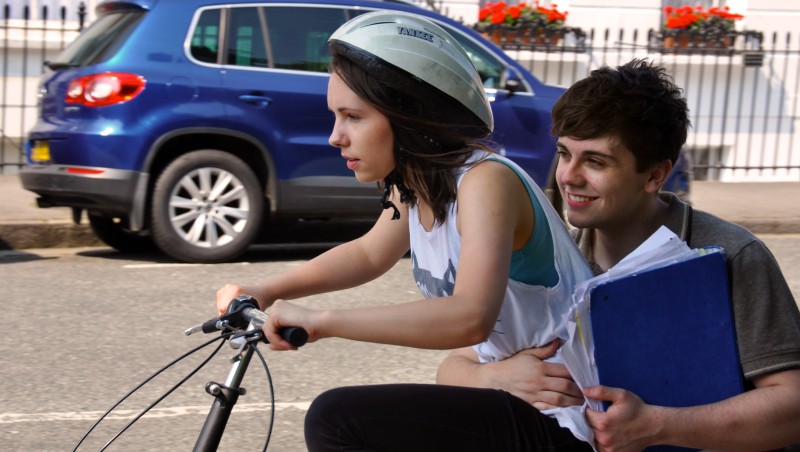 Both Maisy and Ben serve as narrators, and the film spends a great deal of time projecting the duos internal thoughts. By coincidence, the pair bump into each other just as they fantasise about their perfect partner. It’s a classic gag, and one that’s almost Shakespearian in delivery (in relation to both William and Hillary, the movie director).

The pair, lonely as they are in their social groups, are accompanied by a series of pounding guitar tracks that echo their internal frustration. The indie soundtrack plays like a third lead, guiding and jeering Maisy and Ben through their respective character beats. The film reaches both a visual and musical crescendo in its 10th minute, as both rain drenched characters sit next to each other on an otherwise empty bus. Much more powerful than the power of love, the power of music brings purpose to an otherwise purposeless life. And much Paul Weller and The Jam, Soundtrack To Sixteen feels urbane, slick and quintessentially British!

Soundtrack to Sixteen is available on Amazon Prime from Monday, May 4th.

Andrew Tiernan's indie-neo-noir-flirts-with-occultism has a delectable photography throughout and a very nice surprise in store at the end [Read More...]