Be Good or Be Gone

"Dirty gem"
Two criminals are released from Mount Joy to a Dublin that has both celebrated and ruined their lives, in this self-funded and convincing indie from Ireland - on Tuesday, April 13th on various platforms

Given a four-day temporary release from prison, Ste (Les Martin) returns to his terra firma in search of resolution. His partner Dee (Jenny-Lee Masterson) shuns him when he turns up unannounced to his place of work. He settles her with a coffee before he talks about resolving himself. Meanwhile Weed (Declan Mills), another prisoner granted a four-day leave from prison, has his sights on becoming a fashion don. Between them, the two men battle their self afflicted addictions to love, substances and robbery.

In what proves to be Ireland’s answer to Heat (Michael Mann, 1995), the story centers on two unlikely rogues. Like a rich Roddy Doyle novel, the film sprinkles with sparking wordplay: fresh with deep, darkly written Dublin slang. An encounter with Ste’s ‘Ma’ (his mother) reminds him how far he’s fallen in life, a conversation with a fellow drug dealer finds him how difficult it is to return to civilisation. It’s not a comedy in the traditional sense, but it does have a richly dark undercurrent flowing within the script. Take Weed’s exclamation of recognising a rat-bag for his questionable choice of sock-wear as one choice example. 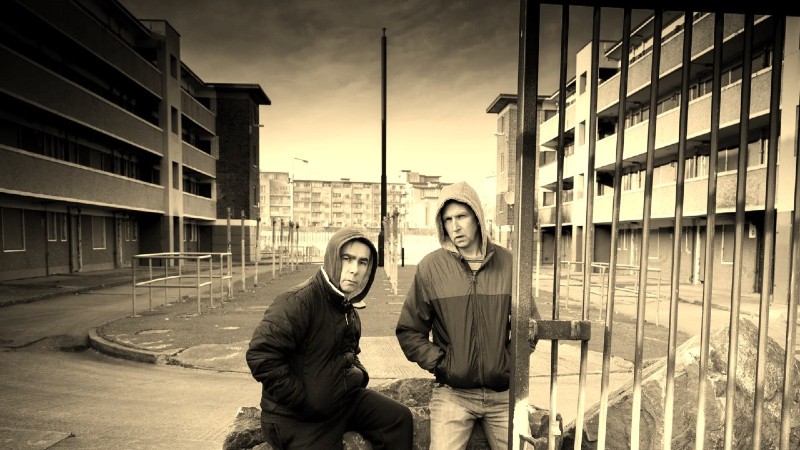 Another rat-bag (played by the mercurial Graham Earley) picks up the two unassuming characters, before throwing them into the confines of a shop robbery. It being Dublin, not Miami, the shop is little more than a newsagents and Ste’s fury envelopes when he’s given a poxy €20 in “wages”. In a classic tale of Ulyssian qualities, Ste finds traps on every street he considers home.

Yet like Robert De Niro in Heat, he’d give it all up for love. Returning to a local pub, he watches the woman he treasures sing out a tavern ballad. He brings her on a walk, spinning tales of pig-tailed beauties who once won his heart over. Yet for all his tales, beautiful and bold, he can’t escape the lingering crimes that keeps his love from returning her affection.

His memories of gratuity turn to gratuitous actions. In one of the film’s more extraordinary scenes, he pauses over the gun that sits by his bedside. It’s a beautiful segment in a film that follows the romance of escape as thoroughly as it follows the romantic conversations two lovers share. In one four-day “holiday trip”, Ste and Weed uncover the values, bonds and relationships that keeps this wonderful world floating all around us.

Be Good or Be Gone premiered Garden State Film Festival in New Jersey on Saturday 28th of March. The Festival was held online due to the Covid-19 virus. Available on Tuesday, April 13th on various platforms.

Neither good nor evil!

Eoghan Lyng talks to Cathal Nally about his debut feature BE GOOD OR BE GONE, about two prisoners on temporary release in a very "durty" Irish capital [Read More...]

A small English town directs its villagers in directions of which none would have ever conceived - in cinemas on Friday, October 30th [Read More...]