Sudan has been in a near-consecutive string of conflicts since its independence in 1956. The deadliest of these was the Second Sudanese Civil War, which raged from 1983 to 2005 and ended with the creation of South Sudan, which would have its own civil war from 2013 to February 2020, causing a further 383,000 deaths. This miasma of death and dictatorship crushed infrastructure and erased culture that wasn’t overtly Islamic. Consequently, Sudan has been without a film industry since the military coup of 1989.

Amidst this narrative of chaos, however, has been the Sudanese Film Group (SFG), led by four retired filmmakers – Shaddad, Suliman Ibrahim, Eltayeb Mahdi and Manar Al-Hilo. They’re an affable, insouciant bunch whose bond has seen – as they humorously catalogue – ‘three democracies and three dictatorships’. The true soul of their friendship, though, is an existential passion for cinema, and Talking About Trees documents their struggle to share it with the Omdurman community. 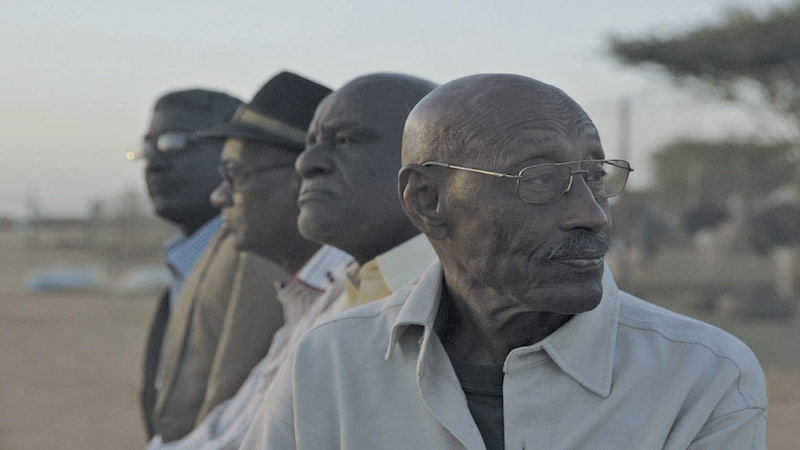 To do this, they aim to host a series of free public film screenings that, after consulting the locals, will kick-off with a showing of Django Unchained – a solid choice. Their venue is dusty, gutted and decrepit, but the old pals’ easygoing stoicism very much subscribes to the maxim of “where there’s a will, there’s a way”; until, that is, they notify the local government, which is a hive of venality, incompetence and Islamic fundamentalism.

The men’s quiet struggle is observed rather than investigated. Director and cinematographer Suhaib Gasmelbari steps back from his subjects, framing shot after beautiful shot with an almost tableau effect; the only life in them coming from the men’s energy and ambition.

Despite the injustice of it all, Talking About Trees isn’t here to appeal or campaign. It is an unassuming work with an organic, engaging humanity. Alas, thanks to a mindless, authoritarian regime, it seems the Sudanese Film Group will struggle to move beyond their dark, dusty storeroom trove of 16mm cameras and Bunuel tapes, and the locals, who have a combined literacy rate of 47%, will continue to be failed by their government.

Talking About Trees is available on DVD and VOD on Monday, April 27.