"Filthy genius movie"
Ben Affleck's 2010 crime thriller is a meditation on love at a time of great peril, and it has now been made available on Netflix!

Initially billed as just another take on The Departed (Martin Scorsese, 2006), in reality Ben Affleck’s second directorial feature only shares Boston as location and character with the Oscar winning Scorsese. Affleck’s love of his home-city had been explored in the pleasant Good Will Hunting (Gus Van Sant, 1997), but this is more sophisticated territory. Behind the machine gun fire, drug pushes and myriad nun masks, comes one of the most sustainably romantic films of the last decade. In one way, it’s easy to forgive Affleck awarding himself the lead role: he lets Jon Hamm and Jeremy Renner have the meatier lines, while he contents himself as the dippy mobster falling intractably in love.

The love in question is Claire Keesey (Rebecca Hall), a liable witness from an armed robbery (led by Affleck’s Doug MacRay). Bursting into tears in a launderette, she comes face to face with Doug, unknowing, unsure and unaware of his crimes. She’s convinced she’d recognise the burglars if she heard their voices – Doug’s not sure. Captured by her susceptible beauty, Doug tries to protect himself with her information, while protecting her from the mortal hands of his unhinged ally Jem (Renner). 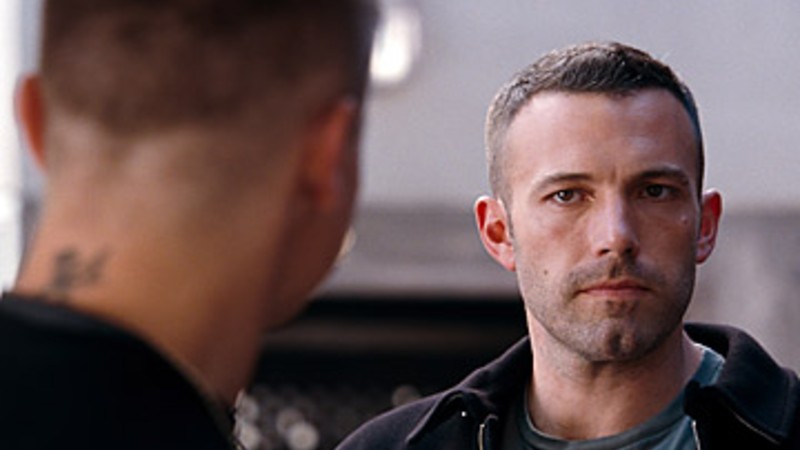 The Town is as much a love of brotherhood as it is of the more romantic variety. When Doug informs Jem that they are to go on a mission that he can’t go into details about, Jem’s response is ecstatic. When Doug decides to quit serving Irish crime lord Fergus (the magnanimous Pete Postlethwaite), it is with a packaged gift, not a bomb, that serves as his farewell. And when they decide to steal $3,500,000 together, it is as fraternal Boston cops that Doug and Jem dress as they embrace their latest misdemeanour.

Renner is excellent, strangely excited by the various violent outlets he pursues. If Jem dislikes the lifestyle, he at least loves the life. He could’t be any less different to Doug, a man weary from the opening frame. Claire provides him a shelter, a stability and he in turn provides for her a comforting ear. Forcing their imminent breakup comes FBI Agent Adam Frawley (Hamm), a maverick cop whose use of fists are as effective of getting answers as his effortlessly charming manner.

It’s a terrifically written script, arguably Affleck’s strongest to date. He won an Academy Award for co-writing Good Will Hunting, and another one for making Argo (2013). But he has yet to equal a film with such creativity, mastery and romance as The Town.

The Town is now available on Netflix!