Not since Kevin Chu’s Fantasy Mission Force (1983) has Jackie Chan looked ever so muddled in being a part of a movie composed of the following: undead corpses, stereotyped manic amazonians, ghosts playing cards, Japanese Nazis, and Abraham Lincoln as a World War II general. In Oleg Stepchenko’s 3D catastrophic wow of the puerile, Chan plays ‘the master’ in the midst of the continuation of Jonathan Green’s (Jason Fleyming) risible voyage of discovery from Europe to Transylvania, the Carpathian Mountains and the East.

He’s now found himself commissioned by the Russian Czar to map out the far east territories of the Russian Empire, though he’ll find himself in China through encounters of such mammoths in fantasy. The fantastic elements are everywhere: grotesque looking creatures vaguely designed between alien and insects, Chinese princesses, cute flying goblins (words that should never be uttered within the same sentence), and just a lot of British soldiers speaking in dubbed English to some truism dialogues. Like Fantasy Mission Force, Chan is top billed to attract the fandom galore, but only really appears in a couple of scenes in a film far less interested in its actual core and central characters.

When you’ve got Jackie Chan and Arnold Schwarzenegger at the top billing of Stepchenko’s The Iron Mask (or, in its confusing alternative title The Mystery of the Dragon Seal: Journey to China), one’s to expect an obvious duel of awesomeness in perhaps a rebuttal of corny puns as seen from Schwarzenegger’s on screen duo with Stallone, Lou Ferrigno, Bruce Willis, Chuck Norris, and so forth. Unfortunately, a lot of those duos don’t measure to anything worth their talents, and that factor is pretty surprising given the endless amount of potentially exciting narratives that would put the models of vigour in what could be a quintessential cinema of this kind. 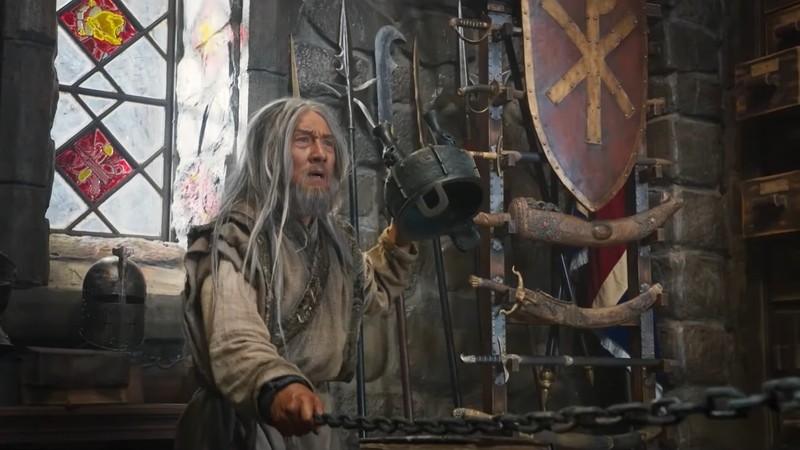 What does that mean? Before watching The Iron Mask there was a complete obliviousness to the film even existing. Who knew Jackie Chan and Arnold Schwarzenegger would co-star in a fantasy movie? Who wouldn’t want to see these two brawling it out from their own diffident strategy of the fist, and mutual philosophy of the fighter? Not only does the sequel to The Forbidden Kingdom (Rob Minkoff, 200*) rule out any exciting possibilities of a complete story between an ancient master and a brutish warden of the British army, but it for the most part, leaves them out of the film through almost its entirety.

Imagine living in an alternate universe where the movies The Expendables (Sylvester Stallone, 2010), Escape Plan (Mikael Håfström, 2013) , and the tired sequels of the Rambo and Terminator franchises, and every other modernist attempt at resurrecting the all might brawn of action heroes were actually more than what they’re obviously preceded as? What about the American Hollywood influences of Jackie Chan’s undeniable flair? The Rush Hour trilogy only have two redundant motivating aspects behind them: the comical delivery of such nearly crude lines by Chan’s broken English, and the (at least, these days) underappreciated martial choreography distracting the mass viewers from an incoherent story. These movies have the potential for being radical departures from their predecessors of the 1990s. Believe it or not, audiences are smart enough to recognise a new wave of this timeworn genre dismissing plausibilities with an idle attempt of exposition and bloated visual reverence in par to mediocrity. 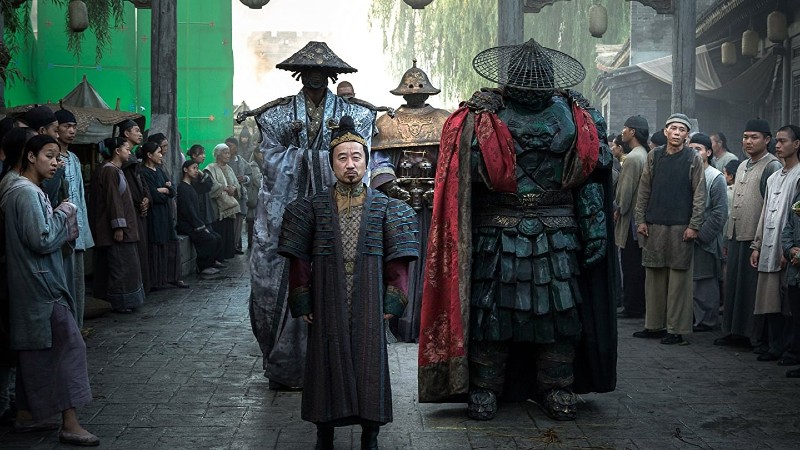 The Iron Mask features some scenes with Chan and Schwarzenegger that feel uninspired. Best way to really describe it is both of these tyrants are dressed in costume and playing their parts to a comical core. There’s nothing more to it. The clear focus of The Iron Mask is between the cartographer, Jonathon Green and the mystery behind a creature known as Viy. A creature capable of mind controlling with its trillion of eyes, turning men into grotesque looking creatures and . . . Well, admittedly, that’s as far into the mysticism and confusing thread of this saga that really lucidly makes sense.

Here’s what to expect: An unusual English dubbing over Jason Fleyming and Anna Churina, some laugh out loud 3D splendour, and a heavy handed CGI title sequence that completely rips off Game of Thrones’ opening theme (with Tywin Lannister’s Charles Dance narrating the origin story between Jonathan Green and his forbidden love-to-be of a dotty daughter to an auestering Lord).

As a viewer, there is a part of this mess that abandons any general preference for what’s considerably watchable. It could be enjoyed for the sake of how bluntly cartoonish it serves as a fantasy and swashbuckling duality between impressionable caricatures seen in the Tekken and Mortal Kombat franchises.

It’s not meant to be taken seriously as a whole. But with the top billed names Chan and Schwarzenegger, the dissatisfied expectancy will remain frustratingly the same as the movies before it, and inevitably after.

The Iron Mask is out on VoD on Friday, April 10th.

The Fast & Furious saga continues to bloat and extend with the franchise’s ninth instalment and first spin-off - now available on VoD [Read More...]

Steve Naish analyses the latest movie in the Star Wars franchise, arguing that the nature of cinema has accelerated to the point of almost exhaustive collapse [Read More...]