"Dirty gem"
War drama chronicles one of the Vietnam War's lesser-known clashes, in which Kiwi and Aussie soldiers played a prominent role - on VoD and DVD on Monday, April 6th

It may be titled like a 1980s action film, but Danger Close is one of the better Vietnam War films in recent memory, and it features not American GIs but elements of the 1st Australian Task Force (ATF). Australia and New Zealand’s participation may be news to some, but over 60,000 antipodean troops served in the conflict, fighting several major battles. Danger Close recounts the first of these bloody engagements – the Battle of Long Tan in 1966, which saw an Australian platoon trail a seemingly broken Vietnamese unit that subsequently counterattacked in much greater numbers.

Director Kriv Stenders and screenwriter Stuart Beattie waste no time in establishing the ATF and their base in the muggy Vietnamese jungle, introducing us to Major Harry Smith (Travis Fimmel) in a scene that has minor trappings of Apocalypse Now (see the panning shot of the schooner and Colt 1911 on the table).

Moments later, the base comes under attack from Vietnamese mortar fire that’s quashed by a volley of artillery, sending the enemy fleeing. With the advantage ostensibly theirs, Major Smith is ordered to rally the men of 11th Platoon and pursue the ragtag force. Travis Fimmel performs Smith with a hardened sagacity, conveying his hard-nosed nous as he leads the quasi-adolescent conscripts, who are based on real individuals. 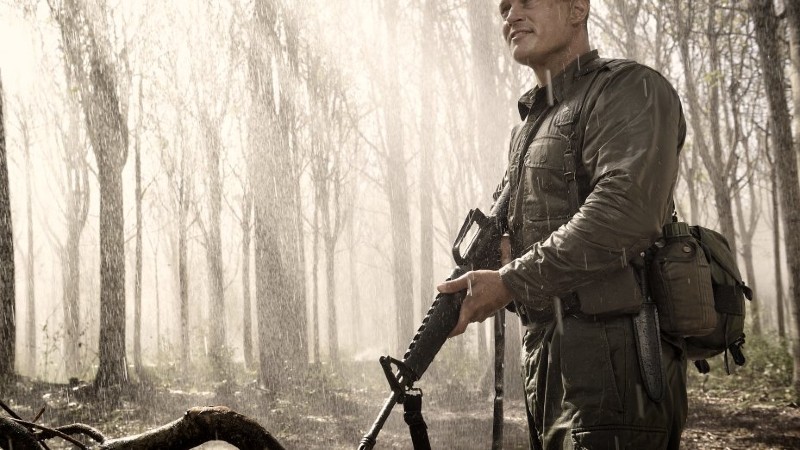 The film’s central relationship is between Major Smith and Pvt. Paul Large (Daniel Webber), who share the familiar dynamic of stern superior and recalcitrant subordinate. It’s a connection that one is unlikely to invest in, but Fimmel and Webber’s performances are natural enough for it to be perfectly believable. There’s not a great deal of character-work outside of this, but there is a definite sense of atmosphere and chemistry in the camp and in the field.

Anyway, Danger Close is not a character-piece but a story of guts, honour and chain of command. It depicts the coordination of battle very well, showing the weight of life and death decisions in combat scenes that are high-impact, realistic and largely free of aestheticised violence.

Particularly impressive is how it depicts the relationship between infantry and artillery, namely a scene in which a bird’s-eye shot traces a shell’s journey from the howitzer’s muzzle, over the trees and onto the enemy’s position. Of course, CGI is used to achieve this, but the effect is complementary rather than intrusive. There are some slow-motion sequences that are slightly over-egged, admittedly, but not to the extent of, say, the tasteless slow-mo headshot of Mustafa in American Sniper (Clint Eastwood, 2014).

Several critics have slammed Danger Close for not considering the war’s divisive context, but such broad moralising is not what the film is about. Rather, it is a robust, nuts-and-bolts account of a battle known by few. Indeed, even the Australian authorities took 45 years before they fully recognised their countrymen’s bravery.

Danger Close is on VoD and DVD on Monday, April 6th.

Is humiliation the way towards humility? Callous drama about hazing rituals in the US is our highlight of the week on Netflix [Read More...]