"Greasy movie"
A girl descends into a hell of angst and addiction, in this powerful French-Canadian tale of misguided youth that premiered at the Berlinale

On the day Catherine (Kelly Depeault) turns 16, a family feud ends with her father deliberately ramming her mother’s car against the street gate. While her parents immersed in divorce procedure full of vitriol and finger-pointing, she seeks support from the school’s rebel group, including Marie-Eve (Éléonore Loiselle), Keven (Robin L’Houmeau), Mélanie (Marine Johnson) and Pascal (Antoine DesRochers ). She finds a way into the group by getting involved with Pascal, an initiation of her own sex life and escapism in the form of hard drugs.

The director Anaïs Barbeau-Lavalette opts for a lyrical approach, despite the hardcore topics. The film is adapted from Geneviève Pettersen’s book by screenwriter Catherine Léger. In collaboration with cinematographer Jonathan Decoste, she populates the scenes with extreme close-ups, emphasising hands, tattoos and clothes – elements that grab the attention of teenagers.

The protagonist finds shelter in drugs. Her world is highly sensory. Dreamlike sequences portray how the characters process their anxieties internally, and they serve as a counterpoint to the harsh reality of these young people. They work largely because of the work of sound designer Paul Lucien Col and the song selection from the 1990s. It was women defined the rock zeitgeist: an important scene is features by The Breeders and another revolves around the band Hole. 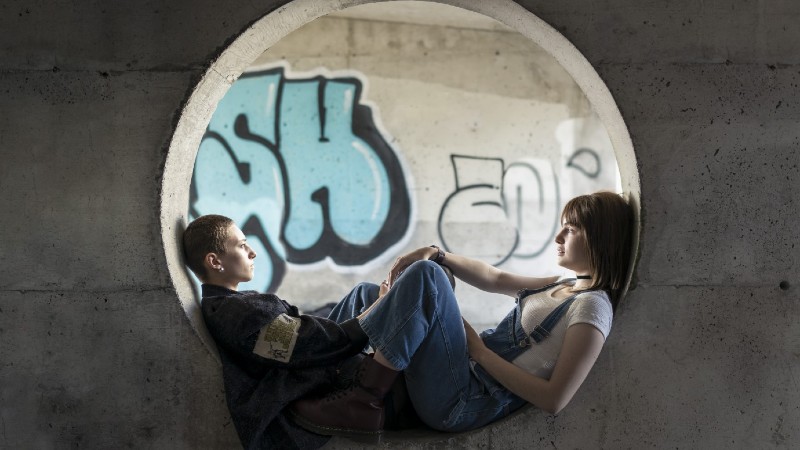 Barbeau-Lavalette is very passionate about her subjects and source material. The topic, however, isn’t entirely new. Christiane F. is a reference point. Our protagonist received the book as a birthday present, reinforcing a comparison that isn’t entirely fletteing.

has for its source material is clear, there isn’t a lot to set the production apart from others made along the same lines. “Cristiane F.”, for example, is a big reference point – and the fact that Catherine wins the book on which the German drama is based as a birthday present reinforces a comparison that is not exactly flattering. It proves that teenage angst and the appeal of drug abuse have become timeless themes.

The film fares better when it shows the lives of young people in Québec’s countryside before the internet changed the way they meet and relate. A real time capsule. This Canadian feature, even with a fairly recognisable plot, makes the most out of its impeccable setting. The story feels current, despite its nostalgic appeal.

Goddess of the Fireflies premiered at the Berlinale earlier this year. Stay tuned for likely UK screenings, once life is back to normal!